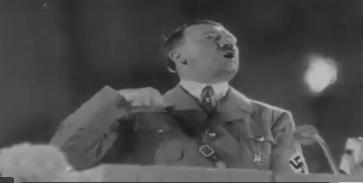 Laura McD. sent in an extra-disturbing sexist ad from Turkey. The ad, for Biomen shampoo, uses the ever-so-common marketing tactic of shaming men for any association with femininity. The voiceover says:

If you’re not wearing women’s clothes, you shouldn’t be using women’s shampoo either. Here it is. A real man’s shampoo. Biomen. Real men use Biomen.

So far, so predictable. But this ad has drawn intense criticism because the exhortation to avoid girly stuff is recorded over historical footage of Adolf Hitler:

According to Adland, it was still airing as of a couple of days ago, despite complaints from Turkey’s Jewish community and other groups, but JTA reports it was finally pulled.

In seriousness, I just cannot fathom their strategy here.

A few years ago, I saw a snack commercial (either potato chips or cookies, can't remember which) that featured Hitler.  And it seemed to be aimed at children.  I was never able to find it on YouTube or any foreign media.

Are they possibly making a misguided attempt to cash in on the Downfall/Hitler rant video meme? (
http://knowyourmeme.com/memes/downfall-hitler-reacts) That's the only possible reasoning I can think of for this commercial.

I am Turkish (from Istanbul) and I can safely assure you that the complaints directed from many communities, not just from the Jewish community. Its sexism was too obvious even in our standards, and Hitler is quite disliked here, despite a slightly opposite trend that emerged in 2000's.
The ad says: "If you're not wearing women's clothes, don't use women's shampoo either. Now, there is new Biomen 100% men. If you are a man, you use Biomen."

I don't know if it's intentional, but I take the name being transphobic too (cis men or bio men are men who were born male, as opposed to trans men who were classified female in birth). So the "real men" reads to me as putting down men who weren't seen as boys from the beginning. Of course telling men they shouldn't be wearing women's clothes is transphobis and homophobic as well. Didn't watch the video, I'm just judging by the text.

For those of you who read german, this blog collects and criticises the use of hitler and his image in popular culture:
http://blogs.taz.de/hitlerblog/
even if you don't read German, you can still browse through the multitude of examples of gratuitous use of Hitler for all kinds of purposes.

-__-  I thought this was an April Fool's joke at first.  While it wouldn't have been the most tasteful, I wish it was.