Evolutionary psychologists argue that when we find certain traits sexually attractive in others it may be because they signal reproductive fitness.  It goes something like this: People who have been sexually attracted to traits that tell the “truth” about genetic superiority have been more likely to choose mates with superior genetics and, therefore, have been more likely to produce healthy offspring that live to an age where they, in turn, can reproduce themselves.  Accordingly, nature has selected for individuals attracted to people who display signs of genetic excellence.

Culture throws a wrench in this theory because human can create their own systems of meaning, collectively convincing each other that certain traits are desirable regardless of the relationship between the trait and reproductive fitness.  The thinness ideal for women is an excellent example.  Judging by pop culture, heterosexual men have a strong preference for very thin women.  In fact, however, the weight idealized in mass media is not conducive to reproductive fitness; women won’t ovulate or menstruate below a certain weight because their body recognizes that it can’t support a pregnancy.

A new study — by Leigh Simmons, Marianne Peters, and Gillian Rhodes — offers another tantalizing piece of information regarding the relationship between attractiveness and reproductive fitness.  Pre-existing research shows that men with lower voices are judged more sexually attractive, so the authors decided to measure one indicator of their reproductive fitness, sperm count.

The results? Voice attractiveness is related  to sperm count, but in the opposite direction expected.  Men with higher voices, in fact, have higher sperm concentration, not lower. 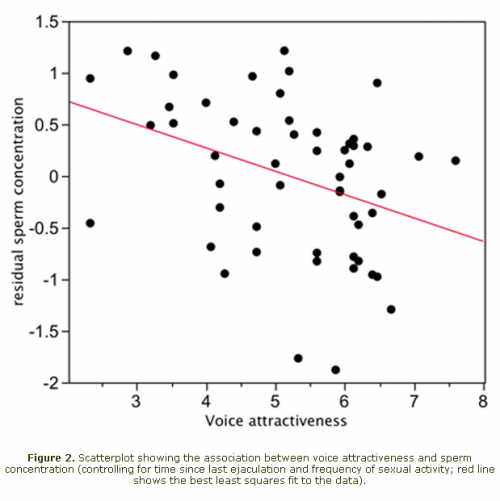 The jury is still out about what this means, but it’s an intriguing addition to the ongoing conversation that social and biological scientists are having about how culture and nature interact to shape human experience.

Excellent point, though one thing I should add is that the voice attractiveness vs sperm concentration chart does not reinforce the argument. It implicitly recognizes scientific methodology as truth. We are thus right back where we started: assuming naturalism based on statistical outputs. Second, even if we were to adhere to the authority of science, we can in no way generalize based on the above data, as I am sure you already know. Not only is the sample size extremely small (54), but there are also only two controls. It might very well be the case that if we conduct the exact same study at a different time, at a different place (even within the same social context), we could get different results. This is one of the reasons why biology ends up, very often, contradicting its findings.

This reminds me of how people say men are naturally attracted to fairer skinned women. When I look at the majority of the worlds population. they are black, brown, and yellow. Wouldn't we all have light skin by now, due to these selection processes?

A less problematic interpretation, which sidesteps the issue of naturalism and the construct of "attractiveness", is if we consider not the attractiveness of voices, but the pitch of voices as fending off potential predators. A lower pitched roar is more likely to scare away a hungry bear than a higher pitched one. The men with high pitched voices don't have as good a survival mechanism, so they boost their reproduction rate by having a higher sperm count.

"In fact, however, the weight idealized in mass media is not conducive to reproductive fitness; women won’t ovulate or menstruate below a certain weight because their body recognizes that it can’t support a pregnancy."
Anorexia (and any eating disorder wherein the menstrual cycle is halted) is an illness, not a way to describe thinness.

An interesting study, but I have to take issue with that plot. There is clearly no line-of-best-fit showing a decline (despite the red line the authors decided to draw). That data is so sufficifently scattered that no one should attempt to draw meaningful conclusions from it.

There is also the finding, supposedly, that women prefer more masculine men during ovulation and less masculine men the rest of the time, IE cads vs. dads. Or something stupid like that.

I would be interested in a cross-cultural comparison on the lower voice = more attractive finding.

That chart is an abomination to the idea of statistically significant.

"Judging by pop culture, heterosexual men have a strong preference for very thin women.  In fact, however, the weight idealized in mass media is not conducive to reproductive fitness; women won’t ovulate or menstruate below a certain weight because their body recognizes that it can’t support a pregnancy."I think it would be a mistake to conclude that media representations of women's bodies represented what is generally considered to be attractive by het men. I recall that cross culturally, ratings of attractiveness were consistently linked to measures of hip to waist ratio and facial symmetry, which may well be more significantly linked to reproductive fitness than "thinness" alone. This is just another good example of how social and cultural issues complicate attraction.

I think you're applying a lot of very specific, narrow, and most importantly, exaggerated, social norms that are very arbitrary to something that is more universal.  First and foremost, it is not a universal norm for men to prefer women who are so thin they cannot ovulate.  In many countries thinness isn't preferred, and extreme thinness is a dying trend that's only been very popular in recent decades.  Second, you're applying a standard of beauty that many WOMEN in very specific, narrow parts of society aspire for to something that men in general like.  I know exactly zero men who think almost-starving thinness is attractive, and all the women I know who do (aside from those with actual eating disorders) fit a fairly narrow demographic.  Where I grew up, being thin wasn't BAD, not by any means, but "thick" bodies were preferred, and very thin girls would be teased and seen as unattractive.  This is a norm in many parts of the US, not some remote part of Africa or the Pacific Islands that has no access to Western media.  Please keep in mind, Lisa, that the east coast and Hollywood-centric standards of beauty based around upper middle class white women aren't even universal in your own society, much less have anything to do with evo-psych or disconfirming it.  In fact, I have heard that the one thing men do tend to look at universally in women is waist-to-hip ratio, regardless of whether thinness or plumpness is considered attractive in that society.  Waist to hip ratio also gives a lot more cues as to general ability to be fertile than "thin or not."

A big issue with this is that evo-psych, while it's still on pretty shaky ground, is usually spouted out in very inaccurate terms by people with little knowledge of evolution OR psychology (often racists and sexists) who will use possibly relevant data to justify their beliefs.  Discussions also tend to, like this one, ignore social constructions and how they also might figure in.  Sometimes a beauty norm is socially constructed, sometimes it may be biological, and sometimes it's both.  A better question here is, do all societies have this deep-voice fetish?  Has this been relatively consistent over time?

Why is there a picture of a deer?

1: I didn't know Evolutionary Psychology was still taken seriously by anyone. Lots and lots of entertaining just-so stories, basically no evidence.

2, in direct support of 1: While the line in that plot may be what the math comes out to, the distribution is obviously near-random at best. It's pretty much meaningless.

Clicked on the study. N=54, and the participants were recruited by fliers on a college campus.

[...] a low, sexy voice. Think Barry White first thing in the morning. Before he died obviously but they should be picking the falsetto fellas because can hit more than just the high [...]

Data gathered with a Smith & Wesson.

"There were no significant correlations between men's sperm motility parameters and voice pitch, rated voice attractiveness, or rated voice masculinity"

That seems to be what the graph says. Those dots are spread all over the place without much significant correlation. I am not sure why a bunch of folks down there in the comments are so upset. They do not seem to be making any controversial claims above what is suggested by the results collected from their tiny sample size. Tiny little study, minor claim. Easy, right?

See why evolutionary theory is not the answer? Seriously, there are SO many things that could never happen if evolution [as taught in public schools] was true. Consider the eyeball, heart, oxygen levels of the atmosphere, the brain, personalities, music, art, love, sex, etc. Clearly this stuff did not happen by accident. Please stop allowing the lies to be force-fed to you through the media and "science". True science does not include evolution.

The kind of thinness we idolize now is -not- the one that causes infertility. Almost everyone agrees that such a thin woman looks ill and not attractive. What I agree with is to feel attracted to a healthy weight, not too thin or fat, as obesity might be genetic and it usually comes with some crippling conditions or disabilities, just like extreme thinness.