YetAnotherGirl, Andrew, Rosemary, Nathan Jurgens0n, Dolores, and Ann K. all sent in an ad for Belvedere Vodka that should be listed in the annals of bad ideas. The ad shows a gleeful man grabbing a distressed-looking woman who, we are to presume from the text, must not be going down smoothly (via Feministing): 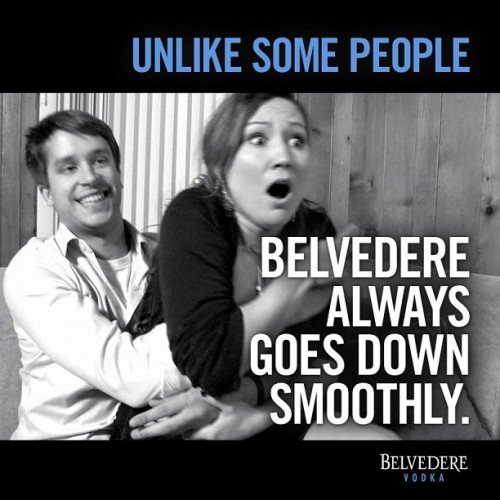 Because how is it not funny to present your product in a context that says sexual assault is funny?

Online criticism of an ad that seems to be making a joke about forcing women to engage in sexual acts led to the company pulling the ad and issuing an apology of the passive “sorry if you were offended” type:

The company’s president also apologized when speaking to CNN about the controversy (via The Consumerist):

It should never have happened. I am currently investigating the matter to determine how this happened and to be sure it never does so again. The content is contrary to our values and we deeply regret this lapse.

The company also made a donation to the Rape, Abuse, and Incest National Network (RAINN).

Phil Villarreal, who posted about the ad and the apology at The Consumerist, suggests that the ad may be even more cynical than it at first appears:

The cynical might wonder whether or not the campaign and apology made up a coordinated effort to draw attention to the brand.

Intentionally invoking outrage, then making an apology and symbolic corporate donation as marketing strategy. Any readers with marketing expertise have any insight here? We often see cases of companies desperately trying to control the negative effects of controversies. When does a controversy hurt a brand and when does it serve as a marketing opportunity?

UPDATE: Reader Tom points out that it turns out to be a still from a parody video that someone at the company then reposted (via Adland):

Somebody on their social media team obviously created (or found) and posted it thinking it was an amusing parody. And that person has probably been found and fired.

But it is unlikely anyone officially *in charge* of the brand actually saw and approved this.

As Tom says, this brings up a separate issue: the challenges to companies of managing brand image in a world where one person in the organization can quickly disseminate something via the company’s social networking sites to thousands or even millions of people with much less oversight than a traditional ad campaign would get, especially when viewers make little distinction between images included in tweets or Facebook updates and those in billboards, print ads, etc.

That's not an apology. "We apologize to any of our fans who were offended..."
That's weaseling. An apology would be for using that image in conjunction with those words.
And as cynical as I am, I cannot quite believe that this was a deliberate ploy. I tend to think that it was just entrenched carelessness about women. "It's just a joke, right?!"
Yeesh.

In before "But that doesn't look like rape to me - it just looks like she doesn't want to give him oral sex!!!!", which the most constant refrain I've heard in spaces other than social justice-oriented ones.

Terrifying, because it shows we live in a world where potential bystanders (and perpetrators) don't even know what sexual assault looks like, which makes them incapable of helping potential victims.

Said as someone who was grabbed and assaulted at a party in front of her friends, some of whom probably still today don't even realize how awful that experience was.

Maybe I'm dense today. Could someone clarify what's going on in the photo? It looks like she's being groped (unwillingly), but that doesn't seem to match the caption. Or does it just not make any sense beyond, "Women don't like to be randomly groped! Or give oral sex! LOL."

Hmm... when I read the ad, I assumed the "unlike some people" referred to the jackass guy.

Are people mad that groping is the theme of the ad or that "unlike some people" referred to the girl?

I work at an advertising agency.  The ulterior motives for this ad suggested in the article above are exactly what came to mind the moment I heard about this.  There is absolutely no way this was a mistake, and I'm sure the apology was already written before the ad was posted on Facebook.  You'll probably be seeing more things like this in the near future.

Well, I will NEVER touch this shit. And, WOW, is that guy an UGLY cuss. Reminds me of Joe Francis. Bluuuurgh...

As Åsk Dab Wäppling points out on Adland (http://adland.tv/content/belvedere-vodka-just-proved-everything-brand-says-social-media-ad-eyes-consumer) the image is a still from this video (http://www.stricklyviral.com/videos/originals/awkward-moments) which is not something a real creative team would use as a basis for an ad.
Somebody on their social media team obviously created (or found) and posted it thinking it was an amusing parody. And that person has probably been found and fired.

But it is unlikely anyone officially *in charge* of the brand actually saw and approved this.

From Adland:
"This is the most interesting part to me. Not that a photo in a tweet and FB page has managed to spread via the social media it has been announced in, but that the public sees it as advertising the same way they see a biIlboard or a TV-commercial is. The difference between the billboard and the twitter-feed is that the former has to go through a strict approval process, while the latter is the brands voice the minute the young intern set to run the account hits return."

In my opinion, this is the real "sociological images" story here: what is perceived as an ad.PS: I also work in advertising :)

as someone who enjoys consensual 'non-consent' I think it is fair enough to have *some* representations of power-play and struggle within sex in the media. what do we want? just photos of post-coital cigarettes and couples holding hands? I don't love the ad but I don't hate it either.

Another case of such @h:twitter
umourous" fake-ad (in the eyes of the creator, not the company and not the many who were offended) was an ad that an agecy called "
Scholz & Friends" has done for Maredo, one of Germany's largest casual dining steak restaurant chains (without being asked to, they don't have the account).

Wow all this over the top introspective analysis is hilarious

[...] women are victimized, the act is justified by stereotyping men as naturally oversexed and women as asexual, or by blaming the victim.  Alternatively, others may turn a blind eye, or even deny that it [...]