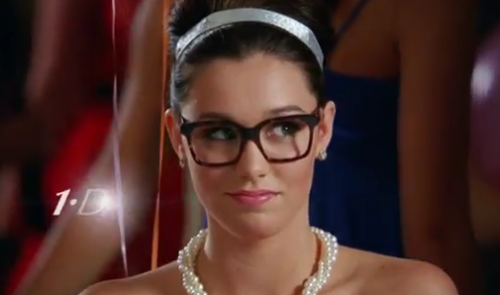 Abby F. and an anonymous reader let us know about an Acuvue contact lens commercial aimed at teens that reinforces both gender and racial stereotypes. The teens look forward to their futures. For the boys, these involve future career success — notice the African American teen dreams of being a famous athlete, while the White boy’s future involves moving up the corporate career ladder. And what does the girl’s life hold? A boy who currently ignores her will want to dance with her.

As the submitters said, the boys are future role models and leaders, while the height of the girl’s future is that she gets to be desired.

UPDATE: James McRitchie, who posts at Corporate Governance, linked to our post last week and has spoken to someone in the PR department at Johnson & Johnson, the makers of Acuvue. The company has since pulled this particular ad, and provided this explanation, which James posted:

The Acuvue Brand Contact Lenses 1-Day campaign was designed to portray defining moments in teens’ lives that often involve the desire to wear contact lenses rather than glasses, such as when playing sports, in social situations, and at life events (i.e., moving to a new school).  As the campaign evolved, we continued to ask teens and their parents to share their thoughts about how wearing contact lenses could play a role in helping teens achieve their dreams.  We received thousands of responses that helped us add new ideas to the campaign.

We recently received feedback about one ad in the campaign that regrettably appeared to reinforce stereotypes.  While this was clearly not our intent, we appreciate consumer feedback and have removed this ad.  We are currently reassessing elements of this campaign so that we can continue to share how contact lenses can play a role helping teens’ realize their hopes and aspirations.

I think James makes a very good point in his post as well:

I’m sure kids have all kinds of dreams that play into society’s stereotypes. Many little girls love Barbies and dream of being a princess. Many young black boys hope to be NBA stars. How does J&J reflect the dreams of its customers while ensuring they don’t reinforce stereotyping?

There’s nothing inherently wrong with these representations in and of themselves, if they existed among a diverse array images of other dreams boys and girls of all races should aspire to. Unfortunately, however, they don’t exist in a vacuum; they appeared in a cultural context in which young women are told, via a variety of messages that they encounter over and over again, that their primary concern should be their attractiveness to boys and where African American teens often find themselves valued for their athletic ability more than their academic successes. When you live in a society with gender and racial inequality, sometimes messages intersect with existing stereotypes in ways that reinforce negative messages just because of their pervasiveness; figuring out how to negotiate such potential problems is an ongoing challenge for all of us concerned about racial and gender representation.

Heh. I managed to convince my family to purchase contact lenses for me when I kept breaking my glasses during soccer practice.

But of course, gender stereotypes dictate that we never show women being active or aggressive, right?

I think they may have been trying to avoid the arguably worse stereotype that would show up had they put the black teen in the dead-end fast food job.  And, the black teen is playing soccer, which I think (in the US, anyway), tends to be stereotyped as a white sport.

But the female teen dreaming of relationship success, while both male teens dream of career success is...yeah, pretty unabashedly stereotypical.

I also noticed that the female is the only one still wearing glasses.  What's up with that?

I'm so glad someone sent this in! This commercial has been bugging me forever! Also...what's so wrong with glasses??! I feel like society's passed the point where we think glasses are bad things.

Haven't watched this yet (I'm @ work), but I do argue that while it is indeed the case that girls/women in our culture are portrayed as aspiring to be 'looked at'/pretty, whereas boys/men 'do things', implicit in that is the concept that men *become* desirable to women by 'doing things.' In other words, men increase their reproductive fitness by becoming successful at their careers, in order to be a better 'catch' to women. Men are desired too, but for different things.

Of course, the ad could have used the same script but swapped around the roles of the actors. It might have even been praised here for doing so.

But even then, it would still remain an ad, designed specifically to exploit stereotypes about people who wear glasses (i.e. they're physically weaker, less powerful, and less desirable than those who don't) and prey on the already-hypersensitive insecurities of adolescents.

That's not a criticism particular to this ad; it's absolutely the norm for marketing. But should passively accept the manipulative psychology of advertising as long as its surface details don't trip up any awkward gender or race stereotypes?

I also like how only the African American boy of the three wasn't wearing glasses, despite their need for glasses/contacts presumably being the whole point of the ad. It's almost as though he couldn't possibly wear glasses because if he did, he'd automatically be an African American nerd, not the African American, fine physical specimen and budding athlete that he's supposed to represent.

I know both men and women, teenagers among them, who choose glasses over contacts.  Some don't even need glasses!  It's part of the "nerd" trend.  People even opt for those unflattering thick dark frames like the teens in the commercial are wearing.  This is a rather arbitrary point to bring up in light of all the other commercial's problems, but it really amuses me how much it fails to capitalize on the zeitgeist.

I can't even watch this. It makes me cringe

Commercials are aimed at your lizard unconscious, where all these stereotypes are functionally true. If the ads didn't work, they wouldn't use them. Don't complain about the content of commercials. Complain that commercials even exist. You're all watching too much television, and reading too much internet. THE MEDIUM IS THE MESSAGE.

omg those were my exact thoughts when I first saw the commercial :P

Of course Black guys only want to be athletes.It's not like the President is Black or something!

[...] the readers who submitted this ad said, the boys are future role models and leaders, while the height of the girl’s future is that [...]

This 1-Day ad (http://www.youtube.com/watch?feature=player_embedded&v=CAfwA2MGKk4) does include a girl talking about a career goal "one day, i'll see my name up in lights" but the ad itself is prefaced by a girl hoping she'll have the guts to say hi to a bloke. One step forward, one step back...?!

I'm happy to report that within minutes of J&J discovering my post referencing yours, top executives were alarmed. They pulled down the video immediately. Maybe having a diverse board and a social media staff doesn't guarantee your ad agencies won't make mistakes, but it may help in getting them corrected. Sociological Images is making a difference. Thank you Gwen Sharp.   See my post at http://corpgov.proxyexchange.org/2012/04/jj-uses-and-learns-from-social-media/

[...] UPDATE: Apparently Acuvue got the message after receiving tons of criticism about this ad, because they’ve pulled it (good luck finding a link that still works) and issued an apology. [...]