As we often see in sports, the men’s version is taken as the default. The apparently neutral “NCAA BB Home” link goes to the men’s tournament, specifically. To get information on the women’s tournament, you have to choose the “Women’s BB link” lower on the page: 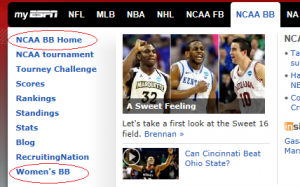 Lydia also found differences in the features available on the brackets you can fill out. The men’s bracket provides a range of features that encourage ongoing participation. While a game is occurring, the bracket is updated with the current score and how much time is left in the game, cluing potential viewers in to particularly close (and exciting) games. After a game, the final score is posted; you can also see the scheduled time of upcoming games: 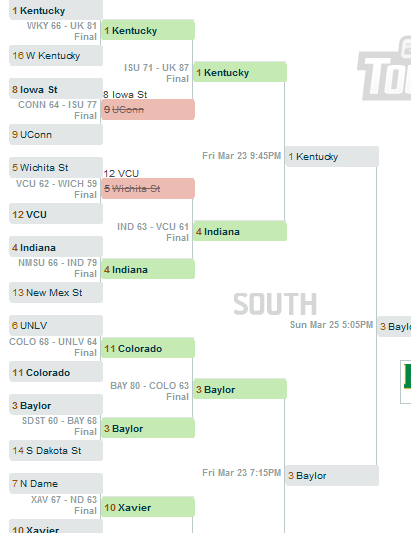 None of these features that add to the value of the bracket were integrated into the women’s brackets — no updates of the scores of games that are in progress (so no chance of drawing in viewers to a particularly exciting or intense game), no schedule to tell you when the next game is, not even the final scores of past games: 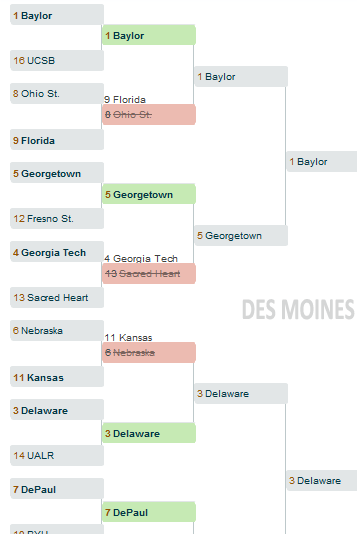 Lydia argues that by making the men’s tournament resources more engaging and informative, it reinforces the sense that the women’s tournament is a side event, not worth the same level of attention as the men’s. As she points out, ESPN probably devoted less time and energy to the women’s tournament website because they assume fewer people will sign up and use it. But by creating less engaging resources, they provide less incentive for fans to bother signing up, creating a self-fulfilling prophecy.

And it isn't much better for Women's college basketball either.  I'm a Lady Vols fan and even when I want to watch a game, I find that they're not well advertised and I've missed several games in the past because I never saw when they're on.  And this is for one of the best (the best in my biased opinion) college basketball teams. Pat Summit (the couch) is well respected, including by Men's basketball fans (at least all the ones I personally know), so you'd think they'd better advertise this.... but they don't.  And from the look up there, it isn't any better for NCAA.

While this may be true, I think it is important to note that many devoted college basketball fans are men. The level of competition in men's college basketball is significantly higher and more profitable, too. The nuances of the men's game is much more refined as a sport.

My husband, who follows college basketball, says that there may be lacking in scheduling for the women's games because they don't actually air on tv. So that would explain something, but still doesn't excuse the lack of current updating scores, in ongoing and past games. I would think if the games are not on tv, or are on hard to find channels on tv, then they would have even more reason to put the ongoing scores.

"Lydia argues that by making the men’s tournament resources more engaging
and informative, it reinforces the sense that the women’s tournament is
a side event, not worth the same level of attention as the men’s."

At my university we have men's and women's teams that both excel in a particular sport. A few weeks ago both teams had big games over the weekend with some exciting moments. The coverage in the sports section on Monday was very heartening, with the women getting top billing due to a particularly remarkable game and gender neutral titles for both articles. The sports are invariably referred to as Men's Sport and Women's Sport.

I have always been quite annoyed by ESPN's treatment of women viewers. I find the espnW site particularly grating because it obviously suggests that most of the site isn't meant for me. I've been a big sports fan since I was a little girl, and I grew up watching sportscenter, so it's funny that when it comes to the website ESPN thinks I need special content.

I think you have to be careful when applying these arguments to commercial activities.  You have a scenario where, given certain hypothesis about the world (the number of people interested in women's BB who would start using ESPN's site if it were better is above a certain threshold), ESPN is missing out on a money-making opportunity, while given another hypothesis (the number is below the money-making threshold), ESPN is doing the smart commercial thing.

Now, sometimes for-profit companies miss out on money-making opportunities.  However, given competing hypotheses like these, I think you should bet on the latter.  For-profit companies give high priority to making more money, especially when it draws on capital they already possess, and it's not like the idea to expand coverage is really "out of the box" or novel in any way; after all they already have a  portion of the site devoted to it.  If you really believe in what you say, you can pitch it to ESPN or Sports Illustrated or whoever.  I know that's somewhat of an empty suggestion since you have better things to do, but you should know that you won't tell anyone there anything they don't already know.  They devote the resources they do because they believe it maximizes their return, and you are not in possession of any knowledge that would change their minds.

As a side note, I'm not sure it's really something we should lament, that women's sports get much less coverage.  Men and women are allowed to be interested in, and pursue, different things.  Ideally, though, society would be structured in a way that gives equal value to the sum talents of women as to the sum talents of men, so that, whatever the various people are doing, it works out that on average men and women are paid the same (on average), and achieve the same social status (on average).  We are obviously very shy of that, but sports is just a drop in the barrel.

With Web content like a bracket, it's a fixed format that data is fed into, that means they created a whole new fixed format for the women rather than just using the men's format and feeding the different data in. One would think it would actually be cheaper/easier to make both the brackets the same and just have them fed by data files accordingly. Just thinking out loud here.

I find it hard to slight a business for covering the topics that people are interested in. Should affirmative action be applied to TV shows, movies, music, plays?

The men in this entire threat are just absolutely disgusting.

I have been trying to get into boxing, and I noticed a very striking example of minimizing women's sports yesterday. On the website talkboxing.co.uk, there doesn't seem to be any indication that women box. The list of current champions goes all the way down to strawweight division (105 lbs) for men, but there isn't even a "Women's Boxing" link to be found. There isn't any outright DENIAL that boxing is for women, and the whole site is for the most part gender neutral, but it's still quite off putting.

There IS a website devoted to women's boxing (womenboxing.com), and it's been designed with love and passion, but it's... well, let's just say that it lacks the polish of the "real" boxing sites.

the popularity of men's sports has always been higher. has nothing to do with sexist behavior. the masculinity in a sport brings out a more brutal and competitve game when it comes to any sport. thats why the men's basketball brackets come up first not because of a sexist male dominance, but because of a higher populary rating. the internet has to provide what the "people" want. people meaning men and women.

But wait. As a hockey fan who now and then visits ESPN's website (even though I should know better), I can tell you this - their NHL coverage also suffers from a lack of funding when compared to Men's basketball.

"ESPN probably devoted less time and energy to the women’s tournament
website because they assume fewer people will sign up and use it. But by
creating less engaging resources, they provide less incentive for fans
to bother signing up, creating a self-fulfilling prophecy."

Here's a question to those griping about the inequality of ESPN's NCAA coverage - how much time and money have you, personally, expended on the NCAA?

If you don't like their site use someone else's like NCAA or CBS sports.  Truth is, more of their customers, men and women, want to use the men's bracket.  The site designers decided to match their resource allocation to the demand.  They weren't trying to shape society.  They may end up doing just that, but all they are doing is mirroring the demand from online users.  The author of this article is, unfortunately, part of a small minority of ESPN.com users.

[...] Naturally, the women’s NCAA tournament has provided the sports world with abundant opportunities for #genderfail, one of which Lydia at Bloomer Girls has detailed in her post about ESPN’s unequal online coverage of the two tournaments.  I found this particularly interesting, as someone who works as a web content provider for a big media entity.  For instance, the fact that the “Women’s BB” navigation item is at the bottom of the menu means it was probably added on as an afterthought, and the fact that each tournament has a bracket with different functionality means that they actually went to the trouble of producing a bracket with less interactivity for the women’s tournament.  That’s a lot of extra work just to reinforce the second-class status of women’s basketball!  (h/t Gwen at Sociological Images) [...]

[...] spring break, I had came across this article about the gendered nature of how basketball is depicted in the media. The article criticizes ESPN [...]