The Stroop Effect: Measuring Our Unconscious

How does a scientist measure your unconscious mind?  It turns out, it can be done.  With a technique called the Implicit Association Test, psychologists can measure your unconscious beliefs about anything: whether, deep down, you associate Black men with weapons, Asians with foreigners, fat people with laziness, men with science, and more.  You can test yourself on all manner of implicit beliefs here.

In any case, it turns out the phenomenon has a name — the Stroop effect — and the best illustration of it I’ve ever seen was featured on BoingBoing.  It involves colors and color names. For a lifetime, we’ve been taught to associate certain colors with certain names. Accordingly, our brain fires faster and more confidently when we see the name in the color, compared to when we see the name in an opposing color.  See for yourself: can you read both lists of colors equally comfortably, un-self-consciously, and quickly? 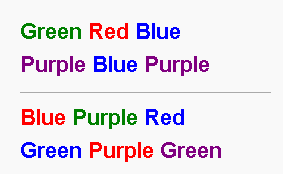 Probably not.  So, for better or worse, scientists see this same effect when they try to get our brains to process paired words like Asian/American and men/science.  The results of these experiments are depressing (both abstractly and often personally when we take the tests ourselves), but it’s pretty amazing that we’re able to delve that deeply into the mind with such a simple task.

I've taken this test before, and I found myself questioning my own internal beliefs. I don't know all of the science behind it, but it does seem to yield consistent valid results.

I can read both lists without any problem... I have to think a bit extra to name off the colors that dont match the words though.

As a long-time player of video games, I have some concerns about how the
IAT tests are conducted.  Every video game requires that I learn a series of hand movements that correspond to a series of actions. If I learn a particular pattern and then arbitrarily switch the pattern after a few minutes of playing the game, my brain is going to get confused and make mistakes.  If I've trained my brain to press E when I see a weapon, suddenly trying to retrain it to press E when I see a unicorn is going to cause some momentary confusion.

To me, hand-eye coordination training does not correlate to unconscious beliefs.

Ive been using the implicit assumptions tests in my Soc 101 class for years. They are great conversation starters, especially when you let the student choose the test. I've always found it interesting that students are much more likely to take the weight test than the race test. Maybe it is more ok to hold certain prejudices in our society.

Please keep in mind that these tests do not say anything about conscious beliefs. Rather they measure your subconscious ability to associate characteristics (such as race) with qualities (such as smart/violent etc). Yes, they may be shocking, but they should be surprising in the least. We spend our entire lives being bombarded with subconscious messages that X race/gender/etc are associated with specific qualities. We would have to have the brain functionality of a cucumber not to pick up those messages.

I took the test and received a result of little to no implicit association (or whatever they call it). I feel like if you are simply good at following instructions you could receive that result.

My friends took the same test and came up with bias until I slightly changed their environment as well and *poof* their bias disappeared as well.

Finally, I've only seen this Harvard test referenced in poorly done pop-sociology books (looking at you Gladwell) and newspapers/magazines. And just because something comes out of Harvard doesn't mean it is amazing or correct (anyone else remember The Bell Curve?).

The Stroop Effect is the name of a particular demonstration of factors that affect reaction time. It is not closely related to the IAT and the unconscious associations it tests, except that they both involve the measure of reaction time.

You are supposed to NAME the color, not READ the color in the Stroop Test.

this has nothing to do with engineering

[…] Implicit bias = racist behavior! Let’s force you to take a test that has absolutely no value at all in predicting your behavior! But hey, we be […]