A while back, we featured a post by Mary Nell Trautner and Erin Hatton about the gap in depictions of men and women on Rolling Stone covers. Their study found that women on the cover are not just sexualized, but are generally hypersexualized, whereas men are generally not sexualized at all, and this gendered trend has grown over time.

An anonymous reader sent in an example that highlights this pattern. The British version of GQ is putting out a comedy issue in April. The issue has two covers, one featuring actress Olivia Wilde (via): 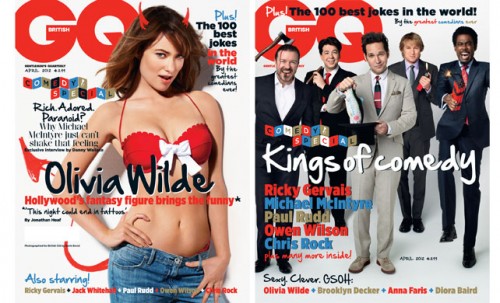 The fully-dressed men are “kings of comedy,” while Wilde is a “fantasy figure.” Notice also that the cover on the right that the four female comedians at the bottom are introduced as “sexy.” While these women may be funny, it’s clearly essential that they be hot while being funny; comedic skills alone just won’t do.

GQ created a trailer featuring some of the comedians in the issue. The video consists of 17 male comedians. One woman does make it into the video; at 0:14, Wilde jiggles her boobs:

Because apparently none of those female comedians are worth including as representatives of comedy in the same manner as the men, but only in an explicitly sexualized manner.

I had to share this - a promotional trailer for the new Mass Effect 3 video game.  It features...

a) A little girl playing with a space ship (gasp!)
b) Who grows up to be a space pilot (double gasp!)
c) Who travels with another woman (unheard of!)
d) Who both are fully covered by their armor (shocking!)
e) Who fight aliens together without any help from a man (no way!)

So, can we have a post about how the Star is shaming sluts? Or have we met our painfully obvious observation quota for the week?

Female comedians needing to be sexy is also seen in the intro to every SNL episode when the women are flitting around clubs and the men are doing various funny activities.

It's hard to agree with this one.  GQ ("Gentlemen's Quarterly") is still a men's magazine, right?  Yes, men like to look at sexy women.  That doesn't seem like a social issue to me.  I agree with the Rolling Stones analysis because RS is not a Men's magazine.  But how can we apply the same standards to GQ?  It would make no sense for GQ to have the male "Kings of Comedy" standing around in their underwear, making sexy poses.  The magazine is targeted at men and the majority of men are not going to be encouraged to by an issue with that on the cover.  Yes, there are some men who would want to see that, but not the majority of their readership.

Note that some of the good users of youtube have helped out by isolating the three seconds of Olivia Wilde in their own videos, saving viewers the trouble of context.

Anybody else notice she's not even credited at the end? I mean, maybe those seventeen names are just for the people in the "song", but still...

This makes me sad. As far as comediennes go, I think Lisa Lampanelli is INCREDIBLY sexy - in all her foul-mouthed, misanthropic glory. But there's no chance she would make it on the cover of GQ, because while she's gut-bustingly hilarious, she's also fat and 50 years old.

Hi! I make a feminism zine here in Middle Tennessee (US) and I have an upcoming issue highlighting Women and Media and I would LOVE to put this article in that zine. Please shot me an email @ feministzinester@gmail.com to discuss further if you are interested!

[...] the field of humor as defined, approved and regulated by males. A type of humor that look like this: 17 male humorists play with their voice, give inimitable faces, parody characters, and one [...]