Cross-National Comparison of Ratio of CEO to Worker Pay

UPDATE:  Since posting this, I’ve discovered that the numbers do not accurately reflect the ratio of CEO vs. worker pay.  Writes PolitiFact:

We don’t doubt the chart’s underlying point that the ratio of CEO pay to worker pay is high in the United States, and is likely higher in our free-wheeling economy than it is in the historically more egalitarian nations of Europe.

But in its claim that the U.S. ratio is 475 to 1, the chart conveys a sense of certitude and statistical precision that simply isn’t warranted — and which is contradicted by the facts. The latest number for the U.S. is 185 to 1 in one study and 325 to 1 in another [though in previous years, those ratios have reached as high as 525 to 1] — and those numbers were not generated by groups that might have an ideological interest in downplaying the gaps between rich and poor. We rate the claim on the U.S. ratio False.

I apologize for not vetting this more carefully. 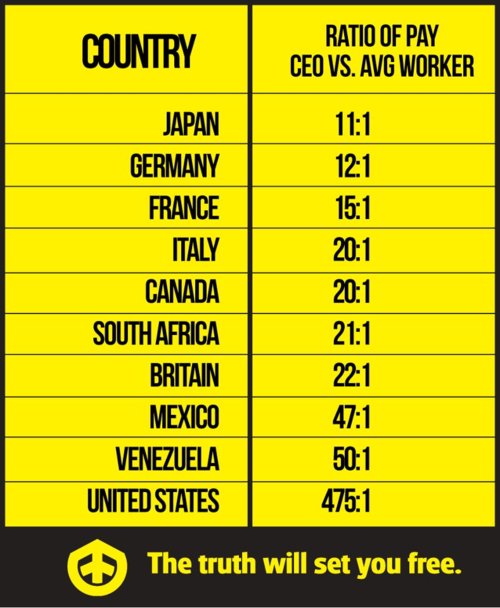 Hey Lisa, could you please start fact-checking stuff that's not from scientific papers? After the "Jay-Z stops saying bitch" and the Spirit-Level posts this is another topic that could have very easily been falsified.

And like those other posts I assume that this one will gather loads of commentators pointing out the problems without there ever being a correction.

Is there a source for these data? I couldn't find one, even back at the original link. I'd like to make sure it's valid before passing it on. Thanks!

We already had this before on this page. And it was already wrong the first time around.

Ok.  To be fair, it's not awesome to present a chart without citations.  It wasn't especially awesome that this chart was included in a presentation of a paper presented by a professor who then went on to say the paper was written by graduate students who didn't reference the numbers.

But, really?  The point is not invalidated.  Other sources suggest the ratio is more like "341:1".  Now, I wish someone would do a study among kinds of CEOs (nonprofits vs for-profit), but the old rule of thumb (10:1) in nonprofits has been largely ignored.

OKAY, we can all at least agree that the disparity within the U.S. ratio is at least WAY OVER THE TOP, no matter who fudges the numbers. Sheeesh people.

Income Inequality and Low-Paying Jobs | House The Homeless — May 1, 2012

[...] people have seen the chart shown here, which “went viral” not long ago. Now the site where it appears carries an afternote [...]