Being in the dominant majority allows you that comfort of not thinking.  People in that majority can assume that everyone shares their views, ideas, and even characteristics, and much of the time, they’ll be right.  “Flesh colored” in the U.S., sometimes even today, means the color of white people’s flesh.

White is the default race, the American race.  It’s easy to ignore that African Americans might not see those Band-Aids as flesh colored.  Similarly, Christianity is the default religion, and those who are in the majority can make those same flesh-colored assumptions.  Justice Scalia, for example, seemed unable to understand that the Jewish families of Jews killed in war might not feel “honored” by a cross placed on the grave of their son or daughter. (My post on this is here.) 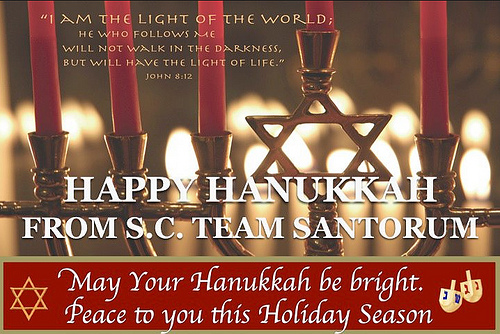 The Santorum team knew that Jews celebrate Hannukah.  But apparently they either did not know or did not remember that the New Testament is not part of Judaism and that Jews do not believe in the divinity of Jesus.  So those words from John — that those who follow Jesus “will have the light of life” — probably did not convey the intended effect of holiday warmth.

"[T]hey either did not know or did not remember"? I doubt this was an accident. Maybe my sarcrometer is off?

While it would be nice to think that Santorum's team "either did not know or did not remember that the New Testament is not part of Judaism", I tend to think that they knew exactly what they were doing. Part of an evangelical's mission is to bring Jews to Jesus. I wish it was as innocent as you make it seem, but I fear it is not.

This sort of blindness could also be seen in the recent furor over birth control and the Catholic church. If you cannot see it, then change the religion to Hinduism, Islam, or Judaism and make the religious requirement one that does not allow women to see male doctors and not allow men to see female doctors.

This is often stated as a religious requirement by conservative Hindus, Muslims, and Jews.

Did I really need more reasons not to like Santorum?

Well, it was in SOUTH Carolina.

I think this article is overly critical of the USA regarding its default religion of Christianity.  Besides Canada, I have never visited a country where so many different religions (and denominations within religions) are visible, both in the media and in everyday life.  I agree that Christianity is the hegemonic religion in American culture (and that from this arise many problematic issues), but I admire the country's visible diversity in religious affiliations.

Why would they have sent Hannukah greetings several weeks late? Why have't we heard of this for weeks? Why is the graphic design so bad? Is this really for real?

It almost seems like that meme where the quote is totes wrong and doesn't match: troll quotes

S.C. Team Santorum sounds like it should be the name of my least favorite soccer team possible

That's got to be from The Onion. Seriously.

I don't doubt it was a mistake. Most christians of my aquaintance are suprisingly obtuse about scripture.

<.< Wow, is Santorum trying to set a record for ignorant intolerance?

wow... probably santorum forgot to read the bible. maybe he thought st john was one of the 12 tribes of israel. for those w/o a context it might not be so completely wacked out & just plain self centred. i try hard not to judge ppl's intentions as malicious when ignorance will suffice as explanation. on the other hand, i try hard as well to avoid voting for ignorance AND malice. Namaste Shalom!

Another good reason for religion to be left out of politics.

This man hasn't got the brains that his God gave him.  Obviously wasn't my God.

I learned long ago that it's impossible to underestimate the knowledge level many Americans have about Judaism.  There are actually people who believe that since Jews read "the Bible" that we're just another sect of Christianity.

I think Santorum more than makes up for this gaffe with his hawkish support for Israel.

Wasn't Santorum the one who said that Christians invented equality?

"The Santorum team knew that Jews celebrate Hannukah.  But apparently
they either did not know or did not remember that the New Testament is
not part of Judaism and that Jews do not believe in the divinity of
Jesus."

This is weak. Santorum may be many
things, but he is not so stupid that he doesn´t know how cheeky it is to
put a verse from the New Testament on a Hannukah card. There are better ways to discuss Santorum´s notions of religious
privilege. Like, how everytime he talks about God he pretty much assumes
the entire audience shares the same beliefs.

If anything,
this card is more to impress his Evangelical followers than to try to win any votes from the Jewish population of South Carolina.

Perhaps he had Jews for Jesus in mind.