Naming Marriage Between People of the Same Sex

It can take a while to find the right word.  But a mot juste may be crucial for framing a political issue. If you like the idea of men being able to marry men, and women women, what should you call the new laws that would allow that?

The trouble with “gay marriage” and even “same-sex marriage” is that these terms suggest – especially to conservatives – some kind of special treatment for the minority.  It’s as though gays are getting a marriage law just for them.

At last, the gay marriage forces seem to have come up with a term that invokes not special treatment but a widely-held American value that’s for everyone – equality.  A bill in  New Jersey has been in the news this week, mostly because Gov. Christie says he will veto it.  The bill is a “marriage equality” law.

The governor is in a bit of a squeeze.  As a Republican with ambitions beyond New Jersey’s borders, he can’t very well be for gay marriage.  But if his opponents can frame the matter their way, he now has to come out against equality.  Which is why the governor continues to refer to the issue as “same-sex marriage.”*

It’s like “abortion rights” or even “women’s rights.” A phrase like that might rally women to your cause, but if you want broader support, you need a flag that every American can salute.  I’m not familiar with the history of abortion rights so I don’t know how it happened, but those who want to keep abortion legal have managed to frame the issue as one of freedom to choose.   They have been so successful that the media routinely refer to their side as “pro-choice.”   To oppose them is to oppose both freedom and individual choice, principles which occupy a high place in the pantheon of American values.

It’s not clear that the “marriage equality” movement has been similarly successful, at least not yet.  I did a quick Lexis-Nexis search sampling the last week of the months January and July going back to 2007.  I looked for three terms: “same-sex marriage,” “gay marriage,” and “marriage equality.” 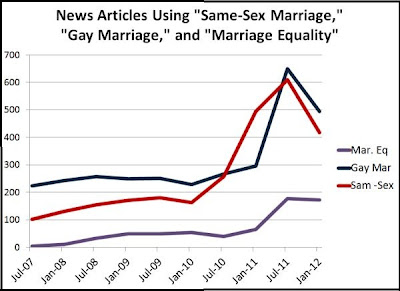 The general trend for all three is upwards as more legislatures consider bills, with big jumps when a vote becomes big news – that blip in July 2011 is the New York State vote.  But the graph can’t quite show how “marriage equality” has risen from obscurity.  That first data point, July 2007, is a 4.  Four mentions of “marriage equality” while the other terms had 25 and 50 times that many.  As of last week, “gay” and “same sex” still outnumber “equality,” but the score is not nearly so lopsided.

Here is a graph of the ratio of “equality” to each of the other two terms.  From nearly 1 : 20 (one “marriage equality” for every 20 “gay marriages”) the ratio has increased to 1 : 3 and even higher when the discussion gets active. 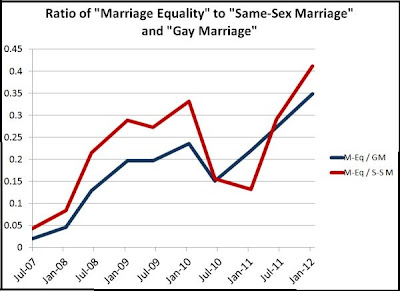 If the movement is successful, that upward trend should continue.  When you hear Fox News referring to “marriage equality laws,” you’ll know it’s game over.

* Christie is usually politically adept, but he’s stumbling on this one.  He referred to a gay legislator as “numb nuts” (literally, that might not necessarily be a liability for a politician caught in a squeeze).   Christie also said that he’s vetoing the bill so that the matter can be put on the ballot as a referendum – you know, like what should have happened with civil rights in the South.

I think people would have been happy to have a referendum on civil rights rather than fighting and dying in the streets in the South.

Several critics, including Numb Nuts, responded that, yes, Southern whites would have been happy to have civil rights left up to the majority.  African Americans not so much.  (If you’re looking for an illustration of Tocqueville’s “tyranny of the majority,” the post-Reconstruction South might be a good place to start.)  The analogy is obvious – race : 1962 :: sexual orientation : 2012 – even if it was not the message the governor intended.

Marriage equality, if it's actual universal equality, would be across all types of marriages, polygamist, interspecies, and otherwise.  I don't think that is something that most liberals in the US would support.

Calling it marriage equality might score some short term points against conservatives, but it isn't a good long term goal, in my opinion.

"Marriage equality" is my preferred frame, with "same-sex marriage recognition" coming in second.

What we want is equal access to the state-sponsored institution of civil marriage.  So, marriage equality fits just fine.  The "we" in this case is LGB people and our allies, not dogs or box turtles or people interested in marrying children or close family relatives.  The only people who would assume that are those who believe, deep in their heart of hearts, that comparing gay people to pedophiles and gay sex to bestiality and incest makes sense.

There are far too many of those people, this is true.  I'd be thrilled if they didn't turn up here at SocImages, though...

Anyway, this isn't a new frame precisely.  I think it's very useful:  it highlights that this is a civil rights issue.  When we talk about the history of, say, interracial marriage, we use that term, much as we do when we talk about the history of same-sex marriage; but when a couple of people from different races get married, we don't say they got "interacially married," just married.  I don't want to get "gay married" someday, just plain married.

"Gay marriage" as a term also tends to erase the bisexuals and some of the transgender people who would benefit from marriage equality.

As a bisexual woman, I do not identify with "gay". Despite what some have suggested to me, I am not some sort of second-class low-grade lesbianette. Nor does my sexual orientation split up into the gay part and the straight part. Bisexuality, at least as I perceive it in myself, is its own thing.

"Marriage equality" covers all of us much better.

I've heard some straight allies make arguments for "gay marriage" that, if carried to their logical conclusion, would put same-sex marriage off-limits to bisexuals. (And "gay marriage" is what these folks always call it.) I generally bite my tongue: let them imagine that they are LGBT allies, not just LG allies, as long as they're doing the work. But, man, am I glad to see the frame changing.

I never thought about the political savvy of the term, I just thought it was a matter of inclusiveness.  I figured the reason the queer community is favoring "marriage equality" over "gay marriage" is because the term "gay marriage" erases a large portion of the queer community.  "Same-sex marriage" is a little better (it doesn't ignore bi- or pansexual folks), but it still doesn't include genderqueer people, who may not identify as male OR female.

I understand that progressives hate the 'slippery slope' argument, but I have noticed many liberals and libertarians (left and right) conceding lately that prohibition of polygamous marriage is untenable, ie, inconsistent with human/civil rights.  So it seems we have slid at least some way already.

So, if the slippery slope of marriage equality means that group marriages are now open for discussion - what's the problem? Let's have that discussion and hash it out (prediction: it's gonna be dreadful!). It's weird how that's tossed out there like it's going to be armageddon, or change the minds of those arguing for personal liberty and equal legal status. (Group marriages that I've known about seem patriarchial and have horrendous power imbalances, but people are choosing it. I think it's a constrained choice, but nonetheless...)

(marriage involving any person or creature who cannot consent is, in reality, not part of that slippery slope and i won't address it here.)

The fact is that currently, civil and legal advantages exist for male-female unions. Unions of two people. To not extend those advantages to everyone is discrimination; to codify marriage equality is to say "two people may define their partnership legally and the state will recognize it and the benefits and status it confers." Period.

Group marriage is not currently legally-recognized, so it isn't as if some people can do it and some can't. Thus, there's currently no specific discrimination.(Yes, the legal benefits of marriage are not available to that third and fourth and fifth partner, but they aren't available to ANY third and fourth and fifth partners regardless of gender.). It isn't analogous to the marriage equality that we are fighting for currently. That's a whole 'nother fight (for those who want it).

I do prefer 'marriage equality', I guess, since like others have mentioned, 'gay marriage' and 'same-sex marriage' does not cover everyone who happens to not be straight. But it's still not perfect. Prrrretty sure polyamorous relationships are still not allowed the blessing of matrimony, so have we really reached ~equality~ just because two people of similar sex can be legally wed?

I really like how you compare our civil rights movement of today with the civil rights movement of the South. I don't think enough people realize how analogous they really are. As psychologist have proven, how we word things defines how we think and how we think defines how we speech. Maybe this fundamental phrase choice could sway our society in the way our constitution meant for it to be.

The other option is to start using the term "hetero marriage" when talking about opposite-sex couples. I think this could be a good option because talking about hetero and same-sex marriages might help illustrate that there isn't really a "universal" idea of marriage.

[...] author of that post sees “equal marriage” as a bit of a sneaky trick by the proponents of same-sex [...]