Yesterday a federal circuit appeals court upheld an earlier ruling by a lower court that Prop 8, the law banning same-sex marriage in California, was unconstitutional (the law was passed as a ballot measure in 2008). According to the court’s ruling, Prop 8 “serves no purpose, and has no effect, other than to lessen the status and human dignity of gays and lesbians in California, and to officially reclassify their relationships and families as inferior to those of opposite-sex couples.” You can read the full ruling here.

The ruling did not address whether any ban on same-sex marriage was inherently unconstitutional; instead, it focused on the fact that same-sex marriage had been (at least briefly) legal in California, and Prop 8 was designed to specifically take away a recognized status that was in existence at the time it passed.

After the ruling, Talking Points Memo posted a map showing the current legal status of same-sex marriage throughout the U.S.: 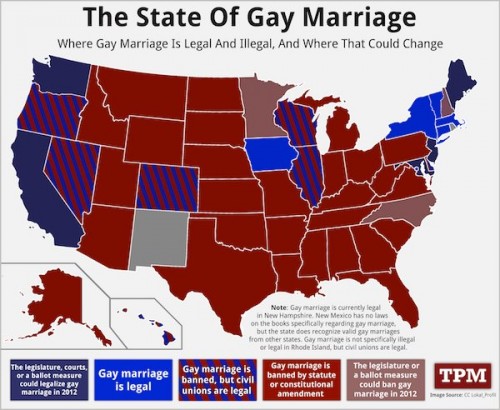 Does anyone know what’s going on with New Mexico?

Gay marriage is de facto illegal in New Mexico, since licenses won't be granted to gay couples. There hasn't been enough legislative support for either bans or civil unions, although polls on the issue are favorable.

Also, is there a clever reason that the TPM logo is the color for "Gay marriage is banned by statute or constitutional amendment"? (Or is it just my monitor?)

This is generally cool, but a little confusing because it tries to incorporate both information about current law and possible future law.  For example, New Hampshire looks like this bad red color because repeal is possible in 2012 - but that seems to override the fact that same-sex marriage IS, in fact, currently legal there.

Similarly, New Jersey's civil union laws aren't visible because it's possible same-sex marriage could pass there in 2012 (but given Christie is the governor, a veto seems likely).
I think this might have worked better as a chart of current same-sex marriage laws, along with a list of states that might change over the next year.

This is awful. How can a western country ban human rights in so many states?

Funny that it's titled "Gay Marriage." Who said anything about sexual orientation? The law is about the sex/gender of the people getting married.

In 2008, the Democratic presidential candidates (IIRC, Republicans weren't interested in attending) sat for interviews on Logo on issues important to the LGBT community.

(Former NM Governor) Richardson gave a really awkward interview and when asked what he's done for queer voters as Governor, he tried to explain that he kept the issue from going to voters.

As a resident, the common wisdom is that, with a large Catholic population (and a decent Mormon population) a vote on gay rights will end in discriminatory laws. There's a strong divide in the state. Santa Fe is solidly blue, Albuquerque is solidly purple and the southern part of the state has a Republican party establishment tea partier for its representative, so it would be close before the big money starts buying up media, a battle gay advocates usually lose.

So basically, New Mexico has avoided taking a stance on marriage equality largely because the people on the side equality have largely focused their energy on delaying that battle until they think they can win it.

One important component is missing from the map - the federal government. This is important because the states cannot give rights related to e.g. immigration or federal tax.

I know it's hard to see becuas eit's so small, but Rhode Island is also grey. Anyone know what's up with that?

I know it's hard to see becuas eit's so small, but Rhode Island is also grey. Anyone know what's up with that?

[...] 6. A helpful map from Talking Points Memo on the state of gay marriage across the United States. [...]

Gay marriage is legal is Washington as of today!

I dont think is right but if you are in love I surely 100% support you .I dont misjudge,dislike,ortalk about gays,lesbians,or bisexuals.