Cross-posted in Portuguese at Conhecimento Prudente.

Philippa brought our attention to a recent ad campaign by the Egg Farmers of Ontario, an organization that promotes Ontario’s egg industry. The campaign, titled Who Made Your Eggs Today?, draws the consumer’s attention to the families engaged in producing Canada’s eggs. The images and videos focus on an idealized image of family farms, emphasizing tradition, family togetherness, and a connection to the land: 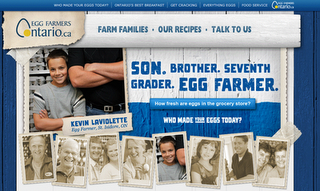 But as Philippa pointed out, there’s something noticeably absent here: the chickens themselves. There’s quite a bit of talk about chickens — how much the farmers enjoy working with them, how amazing it is that they produce an egg nearly every day, what they eat, and so on — but I didn’t see a single chicken in any of the videos listed on the Farm Families page. (Though videos on later years include brief shots of chickens.)

This ad campaign seems to provide transparency into how food is produced; we get to see into the lives of actual egg producers in Ontario, and hear them speak about their lives and the process that brings eggs to the consumer. And for those of us concerned about how the conditions under which our food is produced, this is an important step, as most consumers have little or no direct experience with farming or the lives of people who raise food. The appeal of farmers’ markets , community-based agriculture, and other alternative food distribution outlets is not just the idea of getting environmentally sustainable produce, but also making a connection to a specific producer, and often a desire to support small-scale family farmers.

But the insight into the egg supply chain offered here is selective.  What is carefully avoided in the videos is any discussion of how the hens are treated. We never quite see into the barns to see how the chickens are housed; we don’t hear whether artificial lighting and other techniques are used to boost egg production in ways that cause physical stress to the hens; we don’t know anything at all, in fact, about the chickens.

We enter the story when the eggs have been separated from layers’ housing; we see clean, pretty eggs moving along on mechanized belts or being carefully placed into cartons by hand; our attention as consumers is directed to the people running the farms and away from discussions of the animals or larger concerns about sustainability. As Philippa says, “in giving the egg farmers a public face, the campaign is actually distancing the public from the product they are promoting.”

My girlfriend vowed to never eat chicken again after seeing how terribly they are treated in the documentary Food Inc. If a company knows that it can't show how it treats its animals publicly, that should be enough to make them realize that they are doing something sickeningly wrong.

It's highlighting the human factor of the industry, not the animal one. Many people (really, pretty much everyone involved in agriculture on any scale) consider that to be the much more important part of it. It's kind of hard to be too concerned about the well-being of a creature whose entire reason for existence is to be chopped into pieces and sold at a super market. Care of the animals is usually treated in terms of its affect on the quality of product.

I don't think it's unreasonable for someone to disagree with this worldview, but you have to accept that the people promoting this video are coming from an entirely different set of assumptions. If the the meat and egg part of the farm industry accepted even the basic premise of the major animal rights organizations there would be no farm industry. The goal of the video is to connect normal people (and especially normal people working at family owned farms, not being employed in massive corporate agri-business enterprises) with the food choices you make. Most people would consider actual detailed looks at how food is processed to be unappetizing, even when it is done humanely.

Another aspect to this that most consumers probably don't think about on a conscious level, is that the farmers in the campaign all appear to be nice white middle-class families who love the lifestyle.  The reality we see on movies that highlight the darker side of food production (Food Inc was the first one that came to mind, but there are many more), is that the workers who do the dirty work of clearing out the cages and barns are very likely to be living in poverty, and they certainly aren't doing it because they love it.  I'm aware that rural Ontario is not as multicultural as the urban areas, but there is a fair amount of immigrant labour used in farming, and working conditions aren't always great.

I noticed the same thing in the outdoor advertising campaign in Toronto.
"Who made your eggs today?" This is one of the worst advertising campaigns I have ever seen. What is the objective? The people who take note of this advertising know that it is ridiculous to associate the 'making of eggs' with the 'farmers.' How in the world could you not show the chickens? I think we know the answer to that. They are kept in crowded, inhumane conditions, without access to the outdoors, and unable to exhibit their normal chicken behaviours, all in the name of delivering a huge profit to the 'farmers' who can afford to buy quota. At the end of the day the consumer is stuck with an inferior product produced in a cruel and inhumane manner.

"In giving the egg farmers a public face, the campaign is actually distancing the public from the product they are promoting” - blah blah blah, so what? I see Philippa wants to keep chickens in her yard, but not everyone wants to, and why should we?

The egg marketing boards are just evil. I've spent plenty of time inside typical Ontario and Quebec egg farms, and every one of those chickens is quickly driven stark raving mad by being crammed 7-8 apiece into cages the size of a small home aquarium. Just evil.

Why would a soc blog give a damn about the welfare of chickens?  I'm not saying that someone shouldn't advocate for chicken welfare, but what the heck does that have to do with sociological images?  I guess a person could argue about how the commercials are a reflection of people rejecting the dirty, behind-the-scenes work to show a crisp front operation, but that's not really what the OP is talking about is it?  Instead we have the OP whining about how a commercial promoting egg buying doesn't show the nasty side of the industry.  Well no sh*t.  If I own a gas company, I'm going to run ads about how my gas is great for your car, not how my gas pollutes the environment.  It's obvious that the OP is taking an egocentric approach and judging the livelihoods of farmers in a hurtful, negative manner.

In addition, if the OP and their supporters have a problem with these types of farms, they would be hypocrites unless they adopt a fully vegan diet, wholly comprised of food grown from their own gardens with no external fertilizer additives or pesticides, no processed foods, no genetic hybrid plants, using their own bees from their own bee hives for pollination, water collected from rain barrels, soil made from a composter, etc.

Are you doing that OP?

There was a milk commercial that featured the cows, and the tagline was something about happy cows producing better milk.

I think that the point is to make the consumer feel like they are supporting small/local-type businesses by giving them information about the farmers.   Perhaps the effect is to distance the egg from the chicken, but I think the intent is to show that your eggs come (or should come) from family farms you can feel good about supporting, like eating eggs is a way of supporting your community.