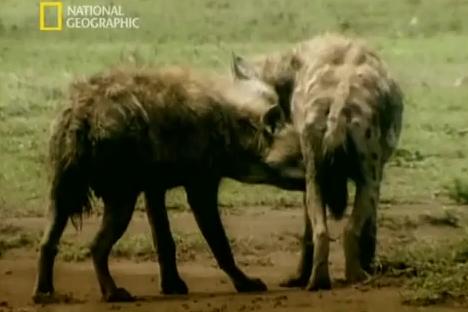 Dr. Bethany Pope sent in a segment from a National Geographic show about animals’ sexual behavior. The clip is an amazingly gendered discussion, describing animals’ motivations and behaviors through the lens of what is considered normative masculine and feminine sexual behavior, the correct place of males and females in the social hierarchy, and the assumption that males and females are locked in a zero-sum game. The anthropomorphizing of other species begins at the outset, when we learn female hyenas want “more than equal rights, they want to beat males at their own game.”  In fact, “Africa’s plains are among the most macho places on earth…they’re testosterone-fueled battlefields,” filled with “swaggering” males. Bethany sums up the tone regarding hyenas, saying, “The documentary presents them as an abomination, usurping male gender roles.” Indeed, at about a minute in we learn that hyenas “seem mixed up.” A hyena “swaggers,” “confident” and “cocksure,” its penis swinging “low and proud.” But what’s this? The swaggering, cocksure hunter “has a secret”! That’s not a penis, it’s an enlarged clitoris; our hero is a she! Not only that, there’s not a penis anywhere to be found, as this is an all-female pack; “these female are some of the most masculine in the world — and they like to sniff each other an awful lot, too. Compounding the “confusion,” they have a “bulging” sac, like a scrotum. And not only are female hyenas masculinized, but the poor males are emasculated, reduced to being “subservient, servile, and scared.” It is rather stunning example of anthropomorphizing the natural world and applying gendered norms of sexuality to other species, and worth sitting through the full six minutes to get the full effect (the video might not be safe for some workplaces; there are a lot of lingering shots of penises and clitorises. A lot.):

I dunno, seems somewhat subversive. First you have the male dominated world of African animals, and then...surprise! the he is actually a she. And male domination is called into question

(but male HORMONE domination is not)

Also the way hyenas have sex is by inserting the penis into the clitoris.

Now if you thought that might be painful, they also deliver their pups through the clitoris.

Most hyena mothers die during labor.

Some like to "blame" it on higher levels of androgens among female hyenas, but...research has shown that that is not true. For hyenas, this is what has worked for them evolutionarily; to call it a difference from the "norm" is really kind of close-minded. There is a massive variety in how animals reproduce, and how they behave wrt gender, and contrary to popular belief, those ways are not set in stone either; they can change substantially based on the environment. People sure like to anthropomorphize, though.

Countdown to MRA panic over our horrible hyena-lady future....

(As an aside, what the heck kind of phrase is "with no external vagina"?  The vagina is not usually an external organ, folks.  Perhaps he meant "vulva.")

Hyenas also fellate one another to show submission, like a pup would lick one's face.

Plus, if you want to be grossed out, look up "hyena butter."

I love hyenas, they are my favourite damn animal.

I got a chance to visit the hyena sanctuary in No. Cal and see some of the footage they have of hyenas interacting with enrichment features (non-regular items the keepers bring into the environment to provide change, good stress, interest, etc.) The video showed two different groups of hyenas (first the females, then the males) coming into an enclosure filled with hay bales. The female hyenas tore through the place, quickly destroying the hay bales and looking like they were having a grand time (i.e. they didn't look stressed, angry, nervous about territory, but relaxed and secure.) The room was reset and the males given the same chance. They moved more slowly, didn't seem scared or nervous particular, but were cautious. They played with the hay bales, and did some damage, but there was not the wholesale gleeful destruction evident in the females' play.

The difference was quite striking and it would be all too easy to create really gendered descriptions. I probably have above, although I've tried not to.

I expected more enthusiasm for the ambivalent, trans-normative world of hyena sexuality.

I'm reminded of Disney's Nature Series back in the 1950s. Even spiders were anthromorphized.

National Geographic presented the world from a androcentric perspective? NO WAY! They do that all the time in their magazine. I expect better of them and their pretty pictures.

reminds me of that book "sexual politics of meat" comparing animals to humans while forgetting the unique component of humanity: culture.

I'm reminded a little of March of the Penguins - in which a very anthropocentric narrative of romantic love is applied to wildlife footage that could have supported any number of alternative interpretations. I recall Morgan Freeman's smooth tones explaining how, at the end of the arduous process of journeying to and from the ocean and hatching a chick in the midst of Antarctic storms, the mating pair "...finally get to spend some time together", as if this was their abiding purpose all along. They could have, for instance, claimed the pair were saluting each other and acknowledging their perseverance at the conclusion of a difficult business venture (assuming they really wanted to have a human-esque narrative). Why must it be romance? I think it's a lovely movie, but it's interesting to look at the stories we are trying to tell about ourselves when we're trying to tell stories about other species.

However, in biology, "male" and "female" are actually defined by behavior, not by XX versus XY. We tend to think that we are anthropomorphizing animals by gender roles, instead of the other way around--our perception of sex is shaped by how we categorize behaviors to begin with.

I don't think that the claim that it's a clitoris is right. For one the birth canal goes through as does the urethra which as far as know isn't the case when we do choose to call it a clitoris. 2: the clitoris and the penis are homologous (science speak for "the same thing") anyway. The penis and clitoris are the same, derive from the same tissues, and so on.

Also the idea that the males are servile is dramatized obviously, even so far as not to be accurate. But you know what? Servile males are more common in nature anyway. In other primates its a mixed bag, gorillas are a matriarchy, and chimps and bonobos have a social structure so differen't I don't think it can even be compared.

I don't know what's more depressing: that National Geographic thinks that powerful females are "messed up," or that debunking the former causes another sociology-is-not-a-science troll-fest in the comments.

Perhaps this conversation should wait until we are able to communicate with our animal brothers and sisters.

I remember reading of a study that concluded hyenas were better at team problem-solving than dogs (or wolves? I don't quite recall) or chimps, despite their apparently-lower individual intelligence.

I had a couple of lectures about hyenas in my undergrad degree. It's basically just an enlarged clit, which is bigger than the penis. Hyenas also have no external vagina, so they invert the clit to have sex. They also give birth through it, where it can sometimes tear. It's usually twins, and they will fight to the death when they are born.

This video though is awful, the commentary is awful. I'd recommend to stick to David Attenborough documentaries.

umm this so fuckin nasty

Quality content is the main driver for users to go see a site and that’s what this website is providing. Thank you!savannah cat for sale

I have three kids and I learnt a lot from having a dog around my children. Since we got our dog we have seen an improvement in terms of their behaviour towards animals and also humans and they are definitely growing to be animal loving. Great article on dog.Cats