Andrew S. let us know that The Lancet has just released a study on global trends in abortion, focusing on overall rates, access to safe vs. unsafe abortions, and how the legal status of abortion impacts abortion rates. The results shed some interesting light on the effects of efforts to reduce abortion by outlawing or restricting access to it. Looking at data from 1995 to 2008, the authors found that abortion rates were actually lower in areas of the world with less restrictive abortion laws: 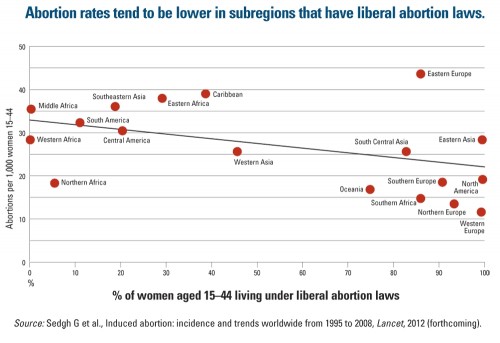 The Guttmacher Institute provides a full summary of the article. Not surprisingly, the more restrictive abortion laws are, the higher the proportion of unsafe abortions (with Eastern Europe being a significant outlier, with the highest global abortion rates). About half of all abortions are unsafe, leading to the deaths of roughly 47,000 women each year, or 13% of all global maternal deaths — almost entirely in developing nations, where restrictive abortion laws are more common and  access to contraception and medical care are generally lower.

UPDATE: A couple of commenters pointed out that I was sloppy with my wording, and it seems like I’m making a direct causal argument (i.e., fewer restrictions leads to fewer abortions). The situation is more complicated than that; the very fact that some nations have more restrictions than others likely reflects a variety of issues that themselves influence the abortion rate, so that while there might be *some* causation, it’s also probable that laws on abortion and abortion rates are both influenced by other variables. I don’t think that getting rid of all restrictive laws in, say, Southeastern Asia, without making any other change at all, would necessarily lead to a dramatic shift in abortion rates. That said, what I find more interesting is the opposite proposition: the idea that imposing restrictions on abortion will automatically reduce abortion rates, which doesn’t seem true, at least on a global level.

While I'm a supporter of liberal abortion laws, the trouble with this study and your blog entry is the suggestion that liberal abortion laws cause less abortions (or that restrictive abortion laws cause more abortions).  As social scientists we ought to be cautious about sloppy "correlation = causation" sorts of statements - especially in a case like this where it's pretty clear there are other factors that are probably important to account for along with the type of abortion laws - for example, as stated at the end of the entry, general access to (and education about and cultural norms regarding use of) contraception, which in turn is a reflection of overall medical care and public health institutions in these countries.

Contraception should be more readily available.

Every abortions is unsafe, and in fact fatal, for the baby.