Duane Reade (a drugstore chain) is welcoming weary New York City travelers on their subway ride with an advertisement playing into one of the most tired stereotypes – the emotional female eater. Take a look: 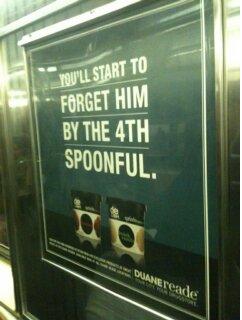 Don’t worry, the picture proclaims – by the fourth spoonful of our ice cream, you’ll begin to forget him! The gendered notions of this ad are clear, as it makes sure to emphasize that these issues of emotional eating are befalling women. ‘Him,’ we are supposed to assume, is the man who left/dumped/broke the heart of ‘you,’ the woman. And ‘you’ are coping with this tragedy, of course, by eating copious amounts of delicious ice cream – that’s how women deal with stress and disappointment, right?

Nothing here mentions taste or ingredients. This is an ad for a sugary stand-in to negate whatever distress a woman may be feeling, drawing on the idea that women use high-fat and/or sugary foods to fill an emotional void.

Emotional eating is a learned behavior. Like all learned behaviors, it is reinforced with supportive messages that can be both direct and subliminal. This ad isn’t trying anything new – media critics, most notably Jean Kilbourne, have for years been pointing out the tactic of equating a food item to an object of affection or even love, one that can stand in for a partner that a woman sees as falling short or who has deserted her. Movies and TV shows so often portray  women nursing broken hearts being offered a pint of ice cream or other food by their friends (see: the entire Bridget Jones franchise) that The Big Bang Theory mocked the trope.

The association in the Duane Reade ad implies that a woman’s desire for intimacy isn’t something dynamic and fulfilling, based on a real connection with a human being, but rather a desire that can be filled with anything that won’t desert her, or that can be easily replenished, drawing on larger cultural message and stereotype of men being unable to emotionally connect and of women being too needy.

Larkin Callaghan is a doctoral student at Columbia University studying health behavior and education, with a focus on female adolescent health. She is currently working on her dissertation which explores the relationship between sub-clinical disordered eating behaviors and high-risk sex behavior, substance use, violence, and suicide. You can follow her on Twitter, Tumblr, and at her blog.

What does it say about me/the ad that, having just glanced at the text, I was confused that the word "spoonful" was there in place of "glass"? I mistook the ad for a very cynical pro-alcoholism liquor ad at first. It took a second to make sense of the ice cream being there.

Frankly, the ad could be stereotypically gender-swapped as easily as "you'll start to forget her by the 4th glass of whiskey"  :/

That must not be very good ice cream. Personally, it takes only one spoonful of my homemade variety before I not only forget him, I forget who I am and where I live. Of course, I put LSD in my homemade ice cream.

Funny, I thought that if you were sharing this ice with a man, you would forget about him because the ice is so good. Then again, that's probably not what they meant.

"The association in the Duane Reade ad implies that a woman’s desire for
intimacy isn’t something dynamic and fulfilling, based on a real
connection with a human being, but rather a desire that can be filled
with anything that won’t desert her, or that can be easily replenished,
drawing on larger cultural message and stereotype of men being unable to
emotionally connect and of women being too needy." Woah. I was with you up to that point, I think that's really over analyzing it to a severe extreme. Honestly, I don't think those connotations are in that add at all.

Hah! I actually took a picture of this on the subway to post on my blog but I started to doubt myself thinking "maybe I'm over-reacting to this." Just shows you how years of brainwashing can make you question your initial judgement. Thanks for making me feel less crazy.

I dislike the ad, but not for the reasons the author does.

Personally, I am sick and gorram tired of the "sad heartbroken woman who just got dumped yet again" trope being invoked for the 400,000th time. As if we spend our lives doing nothing but fall in love and recover from heartbreak and it's the men who are always breaking our hearts.

This is a sexist ad toward both women AND men - implying that women are just bags of emotional sludge who sit on the couch and eat when they're not needily connecting to some emotionally immature male, and implying that men always do all of the dumping.

What about the fact that when relationships end, it's because the RELATIONSHIP isn't working?

This is a very hetero-centric reading, too. But it's a heteronormative culture, which makes it work.

do you think it just didn't occur to them that they could degender this?  not that encouraging emotional eating is good in itself, but it could have said, "you'll forget all about it by the 4th spoonful".  or any number of other things.  but the advertisers thought that gendering the ad would be more effective.