The declining birth rate in Latin America, depicted in this graph, is a nice example of the way that both cultural and social change affects individual choices.  Brazil is highlighted as an extreme case. It’s birthrate has fallen from over six children/woman in 1960 to under 1.9 today. 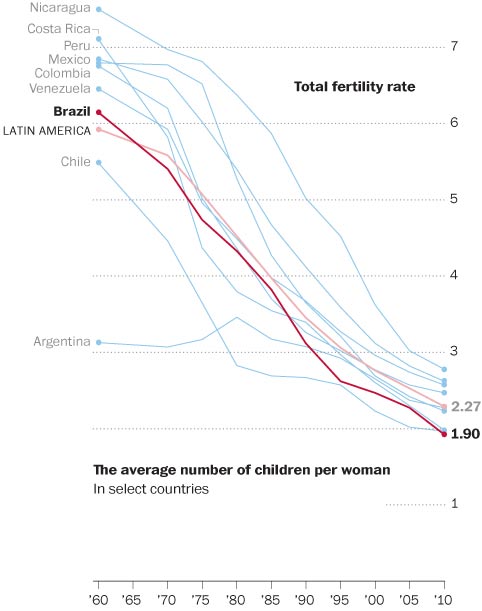 The accompanying Washington Post article, sent in by Mae C., explains that the decrease in the birthrate since the 1960s is related to migration to cities.  In rural areas children are useful. They can help with crops and animals.  In crowded and expensive cities, however, they cost money and take up space.  Economic change, then, changed the context of individual choices.

This transition — from a largely rural country with high birthrates to an industrialized one with lower birthrates — has been observed across countries again and again.  It’s no surprise to demographers (social scientists who study changes in human population).  But Brazil did surprise demographers in one way:

The decline in birthrate, in other words, has occurred across the urban/rural divide. Demographers attribute this to cultural factors.  The idea of “an appealing, affluent, highflying world, whose distinguishing features include the small family” has been widely portrayed on popular soap operas, while Brazilian women in the real world have made strong strides into high-status, well-paid, but time-intensive occupations.  They mention, in particular, Brazil’s widely-admired first female president, Dilma Rousseff, who has one child.

Ultimately, then, the dramatic drop in the birthrate is due to a combination of both economic and cultural change.

She is not that popular, in fact, what elected her was the popularity of the former president Lula, he "transfered" his immense popularity to her, during the election times they basically repeated over and over "let's keep doing what we did" "we can't change now" (of course, not in these words)

...might this have anything to do with the availability of birth control and women's ability to actually have a little control over their reproduction?

So, Lisa, what's your opinion on the sociologic influence of Falcon Crest and Dallas on the economic bubble of the 80s? :/

Cities are deathtraps.  I read somewhere (sorry can't remember where, maybe newgeography) that there has never been a city in the entirety of human history that had a positive replacement rate.  Cities only grow by attracting new residents from rural areas.

There is only one meaningful accomplishment in life, and that is to pass your genes on to future generations.  Cities seem to almost be designed for the purpose of causing extinction to genetic lines.

Don't get me wrong here, I am not saying that this is a bad thing.  Since most people in cities are just a bunch of Hipsters hipstering hipily, the city is doing us all a great favor by driving them to extinction.

The universe is truly a beautiful design my friends.

Let me underline one important aspect directly related to this topic: mortality rates have drastically dropped down in the last 50 years in Latin America. For instance, in my country (Bolivia), mortality for children under 5 reached a "maximum value of 292.50 in 1960 and a minimum value of 54.20 in 2010" (Index Mundi: http://www.indexmundi.com/facts/bolivia/mortality-rate).

Any idea why argentina´s graph forms that little "hill" in the 80´s? It´s the only upward section for all countries in all periods

I saw a report about the fertility decline in Brazil (of course, I can't remember the source) and there was a lot of emphasis on state-run social programs that made contraception widely available and promoted gender equality. If that is true, there is more going on here than just demographic and cultural shifts. Anyone have a good reference on this?

Interesting article about the Catholic vote in the US election - Page 8 - Christian Forums — August 20, 2012

[...] high in places like Latin America and Africa. The world population is growing every day. Says who? I'm hearing the opposite. Originally Posted by Fish and Bread I don't judge. If I had a [...]

Our Hispanic Future? - US Message Board - Political Discussion Forum — December 13, 2012

Good news! One reason why there has been so much crime and poverty in Latin America is because of the high birth rates. Stabilizing the population will increase prosperity and also lower the crime rates, since there will be fewer unwanted children.