Recently the Pew Research Center released the results of a survey of 2,048 individuals about their perceptions of class conflict in the U.S., which are quite interesting in light of the Occupy Wall Street protests and the current attacks on Mitt Romney’s work with Bain Capital, which wouldn’t be that surprising except that they’re coming from other GOP presidential hopefuls (including Rick Perry referring to “vulture capitalism”). In the Pew survey, 2/3 of participants reported that there are “strong” or “very strong” conflicts between the rich and poor, with only 7% saying there are no conflicts:

This indicates an increase in perceived class conflict since 2009, where under half said there were “strong” or “very strong” conflicts between rich and poor. We also some difference by race, with African Americans perceiving more conflict than Whites or Hispanics, and Democrats and Independents seeing more than Republicans: 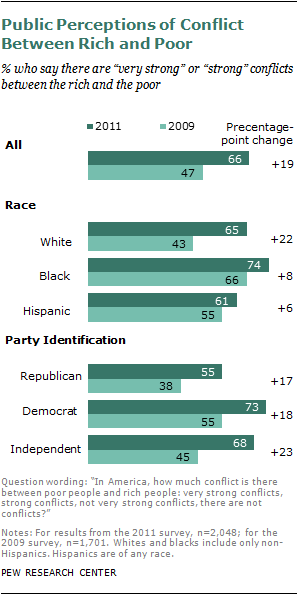 While I think these findings are interesting, I’m also struck by the language. Since Americans tend to define themselves as middle class, regardless of income, the wording here (“rich” vs. “poor”) would seem to ask Americans about their perceptions of conflict between groups that they likely do not identify with personally (though many may interpret “rich vs. poor” as shorthand for general economic inequality, of course). I just wonder what the results would be if we had a survey that asked about conflicts between the rich and the middle class, or “the rich and people like you” (and the same questions about the poor).

Regardless, increasing perceptions of class-based conflict doesn’t mean respondents necessarily think the wealthy are unfairly well-off. They were almost evenly split on whether the rich got their wealthy because of connections (family or otherwise) or because of their own hard work and effort: 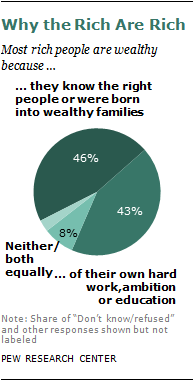 The NYT has an article about the survey as well, with additional graphics. Thanks to Shamus Khan for the tip!

Particularly interesting to me that (as you can see in the original linked study) there isn't a correlation between income level and perception of conflict between 'rich' and 'poor'. People who make under 20k think there is about the same level of conflict as people who make over 75k, and on across the board.

Charles Murray addresses this directly in his latest book. He predicted this widening inequality in The Bell Curve twenty years ago.

Always wonder how much of this is top down versus grassroots. Politicians and media organizations have been hitting these issues *hard* the last couple elections.

Of course, they wouldn't be hitting them if they didn't resonate... you're less likely to be ok with private jets when you just lost your job, and less sympathetic to proposed tax increases when you saw your stock portfolio lose half of its value last year.

Lots of people are in bad economic straits, and the general budget is a shambles... someone's got to be blamed!

"Since Americans tend to define themselves as middle class, regardless of income"

Thanks for bringing that up. As nonamerican, I`m always puzzled about the use of the term "middle class" in US media. Even those who consider themselves to be left of centre talk about how poltics should serve the "middle class". Ìf that meant what it said literally, those who really need  help by the government (poor people) would be totally ignored. Oh crap, I just dicovered what poltics of both Republicans and Democrats is all about! Just kidding, everybody knows that.

Another bewildering thing is the use of "middle class"in left leaning TV shows. I watched some coverings of occupiers helping people against foreclosures, e.g. on Rachel Maddows. The shows portrayed people who face foreclosure because they lost their job and are in debt with hundreds and thousands of dollars. And call them "typicaly middleclass people". So, if being unployed with a lot of debt, no assets and facing homelessness is "typically middle class", who`s underclass then? Only those already starved to death?

[…] now most readers are expected informed with a thought that a American center category is shrinking. Most income and […]