Ethnographers worry that their mere presence on the scene may be influencing what people do and thus compromising the truth of their studies.  They try to minimize that impact, and most of their reports give detailed descriptions of their methods so that readers can assess whether the data might be corrupted.

Photojournalists also claim to be showing us the truth — “pictures don’t lie” — but they compunctions about influencing the people in their photos.  Here for example is a photo taken in Israel by Italian photographer Ruben Salvadori.  (This is a screen grab of a video, hence the subtitles.) 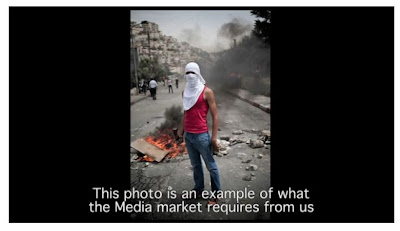 The defiant Palestinian youth, the flames of the roadblock — it’s all very dramatic.  But it is far from spontaneous.  Here’s the photo from another point of view: 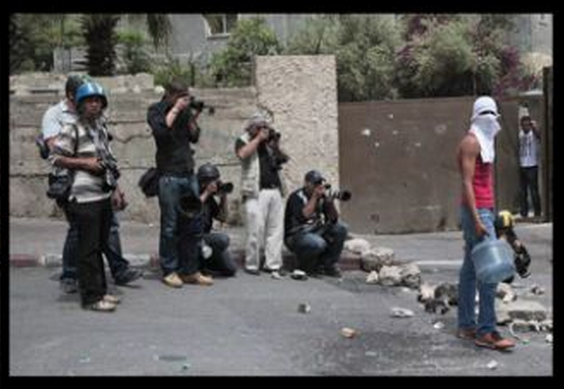 Salvadori studied anthropology, and he is well aware that observers influence what they observe.  But editors want “good” photos, not good ethnography.  So observer influence is an asset, not a problem.

If you point a tiny camera at somebody, what is he going to do?  Most likely, he’s going to smile or do something.  Now imagine this enlarged with a group of photographers. That show up with helmets, gas masks, and at least two large cameras each, and they come there to take photos of what you do.  So you’re not going to sit there twiddling your thumbs.

No, the youths don’t twiddle their thumbs, not with the photogs on the scene.  Instead, they burn a flag. 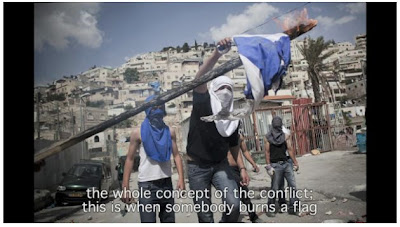 Their relationship is symbiotic.  The photogs want dramatic images, the insurgent youths want publicity.  Of course, even with the Palestinians youths and the Israeli soldiers, when the action gets real, nobody is thinking about how they’ll look in a photo.

(The full 8-minute video of Salvadori talking about photography in the combat zone was posted at PetaPixel back in October, though I didn’t hear about it until recently.)

I don't think there is so much of a problem THAT people react, it's WHO is going to choose to react, and which reactions will be front page material that introduces the bias.

The youths in the image were offered an opportunity to communicate something, and when given that opportunity, they decided that what they wanted to communicate most was burning a flag. That not a lie. The other people who wanted to smile and make rabbit ears on their friends, or just look quizzically at the camera are not lying either, it's just their communications aren't deemed as interesting, even if they may (or may not) be more common.

I'm not sure what the required ethics or goals of an ethnographer are, but as long as a photojournalist isn't coaching the subject ('here's a flag, don't you feel angry?') I don't think that capturing a reaction to a camera rather than a 'natural' state is dishonest. The devil is in the editing.

Interesting, but who edited this. Or rather, who didn't?

[...] pro quo: publicity for those on camera, and kudos for the intrepid war photographer. Check it out here. This entry was posted in rape and tagged Nadav Neuhaus. Bookmark the permalink. ← The [...]

Interesting read, but please, can I can a "like" from everyone else who can't stand the term "photog" ;A;

I'm not sure that the insurgent youths are simply looking for "publicity."  Maybe this isn't what you mean, but this is pretty loaded language.  Perhaps they're reacting to the camera, but that needn't be placed in the same category as "what goes through Lady Gaga's head when she gets dressed in the morning."  They are trying to convey a message, yes, but to boil that down to publicity seems a bit dismissive.  "Doing something for attention" and "doing something when they know it will gain attention" are different concepts.