For the last week of December, we’re re-posting some of our favorite posts from 2011.

It seems obvious that basic cognitive perceptions shouldn’t vary by society.  That is, that our eyes should see, and our brains should process, essentially the same no matter what we call ourselves, what language we speak, or what holidays we observe.  It turns out, however, that even basic cognitions vary across the world.

Most Americans, for example, perceive the two lines in this optical illusion to be of different lengths, with line a shorter than line b.  In fact, they are the same length.

But, as argued by Joseph Henrich and colleagues in the Journal of Behavioral and Brain Sciences, our susceptibility to this illusion varies by culture.  On average, line a needs to be another fifth longer than line b before the average American undergraduate evaluates the lines to be equal in length.  Most other societies that have been tested on this illusion, however, require substantially less manipulation.  The figure below compares how individuals in different societies perform on this test.  The measures are tricky, and you can read more about them here; what you need to know for now is that the societies on the right are more susceptible to the illusion and the societies on the left less. 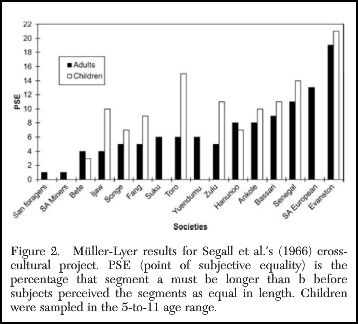 Observing that individuals in more developed societies (e.g., Evanston, Illinois) tend to be more vulnerable to the illusion — indeed, that in some societies, such as the San foragers of the Kalahari, it doesn’t qualify as an illusion at all — Henrich and his co-authors argue that exposure to “modern environments” may be the culprit:

…visual exposure during ontogeny to factors such as the “carpentered corners” of modern environments may favor certain optical calibrations and visual habits that create and perpetuate this illusion.  That is, the visual system ontogenetically adapts to the presence of recurrent features in the local visual environment.

Even basic cognition, that is, varies across cultures.

As Henrich et al. argue, this calls into question all of the truisms of psychology based, primarily, on experimental research with Western subjects.

I wonder how long it will take "scientific" racialists and racists to take the "cultural differences in cognitive perception," and turn it into "racial differences in mental ability." Oh wait, they probably already have.

Aaaargh. "More developed cultures." There is a reason why I get distracted from solid data by sloppy hypotheses. Yes, making universal claims about human bahavior or perception should not be based on testing WEIRDs alone. Good find this. But not doing some basic research into cultural science and adopting a cultural paradigm that has been abandoned in those sciences for almost a century, yet still remains as folk wisdom, is not much better. Creating a hypothesis for correlation between "developedness" and X is bogus, because "developedness" is an ill conceived and misleading term without functional motivation.

So the San foragers have been abducted by aliens and kept in cryostasis as to not develop their culture, while the civilized western societies used their time wisely? Yes, there is compelling evidence that perception varies across cultures. Please don't perpetuate silly notions of cultural progress instead of looking for the key variables that do differenciate those cultures. The authors of the papers tried as much in making exposure to an environment of "carpented corners" that variable. This is important, because, god forbid, some other "less developed" culture like - say, the Aztec with their not so round pyramids would be as good as WEIRDs in falling for optical illusions.

Sorry for the vent.

There's no particular reason you should know this, but just FYI, this is just an instance of regular old perception - the phrase 'cognitive perception' isn't really meaningful. I know the authors of the paper you refer to mention an old Fodor paper which talks about vision as a 'basic cognitive process', but that view is out of touch with modern perception research.

I wonder if it has to do with increased exposure to lots of 2-dimensional depictions of 3-d subjects (ex. watching television and movies, seeing pictures in magazines, etc.)

I wonder if it had to do with the ability of a society who relied on hunting for their survival sees the world as it is not the way they hoped it will be.

The only thing I can think of is that people in "developed countries" already KNOW the trick to the illusion and KNOW that the lines are equal, despite what the eyes are saying, while people in other cultures might not have been exposed to the optical illusion. I say the research is flawed.

I would love to see a study on these kind of illusions that compares people who play video games with people who don't.

What about the results of the children?

Toro for example? My reading is that the adults were not much fooled by the lines and yet the children were by an extremely greater measure. And what about that the results of the children show no correlation in the left to right, so-called susceptibility, that the adults are graphed as having?

Who knows, perhaps it raises doubts about our own susceptibility to graphs and statistics? weird even...

This is fascinating. It explains something that I've wondered about for a long time. I enjoy historical embroidery, especially graphed patterns made up of line units (double running stitch). I have no problems seeing a historical artifact and then rendering the graph to stitch its design.

But I note that this isn't a common skill. I've tried to teach it to others - all standard issue North Americans - but I have found that they have huge difficulties eyeballing comparative line lengths and rendering designs accurately, unless they are using a measuring device of some type. Very few people can start at a point, navigate through a long sequence of linked line segments, then arrive at the indicated finish point with accuracy.

Fascinating to think that it might be conditioning and not wiring at fault.

Hello my name is Richard Weare and I live in Calgary, Alberta in Canada and I am a total idiot and moron as I only have an IQ of 75. I am such an idiot and moron that if someone asks me the directions to go somewhere, I have to tell them that I don't know as I am to stupid to remember anything and that is due to my low IQ of 75.

The results are interesting but not as dramatic as they claim. There are a whole host of perceptual processes that are similar across cultures.

Pointing out a few that vary by environment, ecology, or culture doesn't undermine the claim that there is a general human perceptual system, that, for example, generally allows people to see in color, in 3D, with limited peripheral vision, etc. The fact that you can push some of these perceptual systems around doesn't mean that they cease to exist across cultures. Hence the reason it is still reasonable to draw some conclusions about human perception from WEIRD samples (but always with the requirement of further testing across cultures).

[...] versions, political cartoons dehumanizing historically marginalized groups, and optical illusions that seem to be perceived differently by people from different cultures. The bloggers’ [...]

How Language and Culture Influence How and What We See « Friendly Signal — August 7, 2012

[...] of cool articles about how language and culture influence our visual perception, including color. This one points out that some cultures (such as the San peoples of southern Africa) are essentially immune [...]

[…] cultural influence on how people interpret images in the field of marketing, sociology, and even cognitive and behavioral science; but other than some work in related fields like education, I haven’t seen this issue […]