Time for another round-up of gendered kids’ items!

Will L. noticed something interesting recently at Old Navy. The boys’ section offered two styles of jeans, Skinny and Regular:

But when he looked at the corresponding section in the girls’ clothing, he found not Skinny and Regular, but Skinny and…Super Skinny:

Caro Reusch sent us an example of kids;’ t-shirts with messages about what we value for men and women. She saw the following at a mall in Berlin: 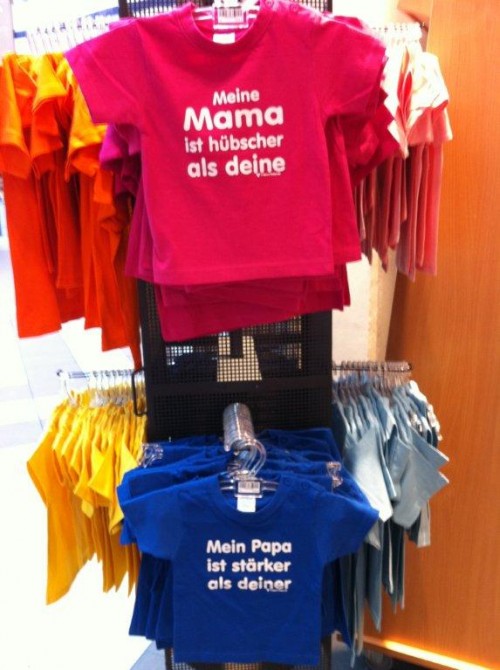 The blue one says “My daddy is stronger than yours,” while the pink announces, “My mommy is prettier than yours.”

Similarly, Lindsey B. saw two themed bibs for sale at Target. The blue bib is a doctor and the pink one is a ballerina: 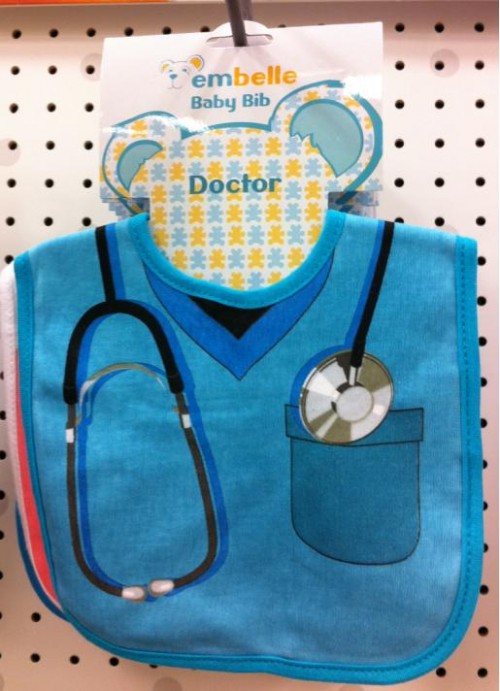 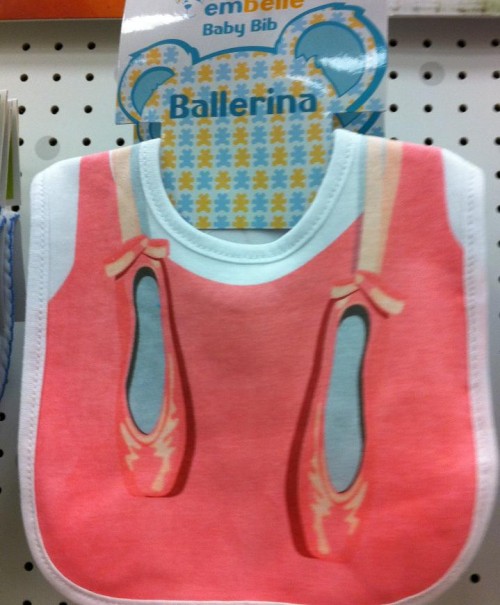 Shantal Marshall, a postdoc student at UCLA with a Ph.D. in social psych and blogger at Smartie Pops, noticed that Crayola has a new product out, the Crayola Story Studio.  It lets you upload a photo of yourself, have it turned into a cartoon, and then it’s inserted into one of 3 themed templates: Disney Princess, Spiderman, or Cars. You can then print off various versions of coloring books based on those templates. The commercial for the Spiderman version shows a boy excitedly becoming a superhero:

For the Disney Princess version, we see a girl excited to become a princess, then dancing in the background with her very own Prince Charming:

As Shantal said, it’s a bit dispiriting that Crayola’s slogan for these items is “give everything imaginable,” but the pre-existing templates, and their marketing, don’t seem to include an imaginable alternative to the “boys = superheroes” and “girls = princesses” division we see so often in kids’ toys.

Madelyn C. saw a store in Warsaw, Poland, that just goes ahead and makes the gendered division of the toy industry explicit: 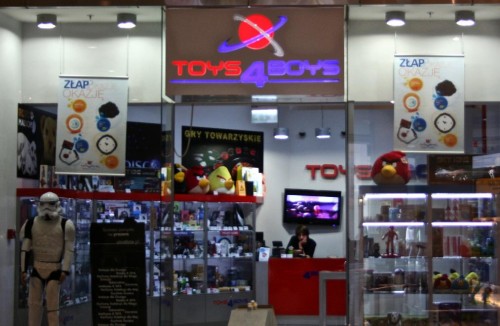 Finally, Jessica M. sent in a link to a GOOD post by Christopher Mims about the Toy Industry Association’s 2011 Toy of the Year Awards. There are general categories of toys, such as educational, innovative, and action, but of course also girl and boy categories (also, I personally can’t think of “boy toy of the year” without thinking of Madonna’s outfit in her “Like a Virgin” performance at the first MTV Video Music Awards, but maybe the ’80s are sufficiently behind us that the phrase resonates differently for most people). Anyway, Mims discusses the gendered messages in the commercials for the nominees in the two categories. Among other things, the categorization is rather confusing. Hexbugs are nominated in the boy category, even though commercials for them show girls as well:

Also, Mims points out that the boys’ category “includes a strong undercurrent of Beyond Thunderdome via WWE.” Exhibit A: The commercial for Beyblade Metal Masters, “performance tops” to be used in “strategic battles”:

Playing with tops has gotten super hardcore, I guess. Probably they should look into a sponsorship from an energy drink.

My 6 year old at the time niece loved her Hexbugs last year. Good thing she didn't know they're for boys.

This year, she's getting Legos. And not the "girly" sets.

Toys4boys is not exactly toy shop. It is gadget shop, similar to ThinkGeek shop.

Almost as disturbing as the jeans 'categories' are the poses of the kids -- both the boys are in 'masculine action' poses, while one girl poses coyly and the other theatrically.

Surely you also saw the article this week about Legos for girls? As the mother of two girls, I'm insulted. Blah!

As the parent of both a little boy and girl, I can tell you 1st hand how hard it is to resist the pull of gendered toys and clothing. But it's equally difficult to separate what's 'conditioned' into kids from their natural tendencies. We don't have cable or buy the kid's 'popular' toys toys. Yet from the beginning my daughter would play for hours with animal/doll figures while my son would spend hours rolling a marble around. She's drawn toward imaginative play and my son's more interested in kinetic toys. So I buy those types of toys for them around Christmas and have to do back flips to avoid the gender stereotypes that the packaging, colors, and themes all suggest. And regardless if it's the work of nature or the media, my daughter will never think robots are as cool as my son does.....though she still wants to be scientist when she grows up.

The top one can be chalked up to crappy fashion standards.  A few years ago, women's pants came in a number of styles: skinny, boot cut, cigarette, relaxed fit, flare.  Now they're ALL skinny.  I finally found a pair of pants (not jeans, like dress pants) that fit me, which is a feat, and they're....skinny.  It's a weird gender issue in fashion, I feel, because very few body types, if any, are legitimately flattered by the style, but it seems to be the only option....

Okay, the jeans bit is just ridiculous to bitch about. There are "regular" jeans for guys and skinny jeans (ones that are tight all over). The girls jeans are hardly the same (don't tell me you can't see a difference in the pictures). The girl's jeans some in skinny (tight all over) and super skinny (super tight all over). Girls where difference clothes because little girls have different tastes generally than boys. Not all. But overall they do. Sometimes there's a double standard when there's two different things.

I actually had a difficult time "definitively" IDing the genders of the kids in the hexbug commercial, but maybe that's because I am always looking for gender ambiguity...

On a similar note, I saw a display at Target today of "Men's Gifts." Basically none of them had anything inherently gendered to them- they were just nifty gadgets (like a silicone watch, a kit with a water bottle, multi-tool, and flashlight, and a heated ice scraper). The only two that were arguable in being gendered were the men's slippers and the motorized tie rack- but I still don't see either of those as explicity masculine. It's not like any of the gifts were, I dunno, a beard trimmer. The ice scraper even said "Men's Heated Ice Scraper" on it. It seems like a very strange strategy to me, because most of these would be useful to women as well, so why even bother?

The Beyblade Battle also looks like a rap battle from Eminem's 8 Mile.

When my brother first told me about BeyBlade, I thought he was saying "Babe Laid".  Can't decide if that was intentional by its makers or not - or if it even matters what their intention was.

While we're thinking outside the gender norm box here, shouldn't we remember that the blue doctor bib is not necessarily a boys' bib? Girls can wear blue too, and scrubs are generally blue.

Old Navy is one of the worst when it comes to gendering. I used to work there. Case in point: super hero shirts. There were mulitple boys super hero shirts but not as many girls. The girls were also all covered in glitter and pink and/or purple.

The cropping of the Old Navy pictures, and the idea that they'd only sell skinny jeans for kids, got me wondering so I swung by their website.

So, okay, "Boyfriend" has been raised here before, but it's not true that there are two each and girls' are skinny styles and boys' aren't.

This seems like something that might've been worth verifying before posting.

If you look closely, you can see that the pictures in this article are cropped so as to only show two categories each and are therefore misleading. There are enough real clothing and gender related problems (imagine a boy jean called "girlfriend" for example.. it would never happen) without including something inaccurate.

Again, I can't expect you to necessarily keep up on trends (especially kids trends that would be strange and unwelcome for adults to pay attention to), but Beyblade and its ilk have been around since I was a kid. That is to say ten years ago.

Funny thing: When my boyfriend and I started opening our presents to each other we found that we both gave each other HexBug Larva (mine is red and his is black). They are so much fun and I'm glad that the makers of HexBugs don't market it a totally as for boys because they are a lot of fun even for grown ups.

I've made an effort to buy my nephew toys that aren't too gendered, blocks, playdo, stuffed animals, etc. The only one that I've bought him that is explicitly marketed for boys I would also have bought for a niece, it's a shape and color learning toy that looks like a car that you "fix" with a little wrench and screwdriver (my dad is a mechanic so it's a "fix cars with Poppa" toy not a "you are a boy and should like cars" toy). Should me brother and his wife have a girl at some point I plan on giving her art supplies, legos, and science kits just like I will for my nephew.

Maybe We Should Call It Blatantsexism-mas | No, Seriously, What About Teh Menz? — December 27, 2011

[...] But despite the powerful influence of these self-imposed boundaries, these are largely invented and relatively new phenomena. Paoletti points out that the blue/pink color line wasn’t drawn until the 1940s – and even then, it was due to manufacturers wanting American consumers to buy, buy, buy. Since then, she adds, we’ve seen a near extinction of gender-neutral clothing for children…as well as a ratcheting up of highly gendered toys (complete with a host of gendered and sexist messages). [...]

The embelle bibs do not specifiy boys or girls anything. Those are the colors of Scrubs, which girls wear. Also girls are allowed to be doctors too, and vice versa, boys can be pink wearing ballerinas.

As far as I know, Toys4Boys is not a toy shop, but a gift shop, they sell various gadgets and collectibles for guys, the name refers to 'manboy' idea. Of course that's also some kind of gender targeting, but it's not aimed at children.

Maybe We Should Call It Blatantsexism-mas — The Good Men Project — October 20, 2012

I swear when my daughter is old enough, we are going on a day out to that "toys 4 boys" store. Also, didn't realize that angry birds was a boy toy.