Reasserting the Priesthood as Masculine

Katrin sent in an interesting example of an effort to (re)masculinize an occupation. Often when we see these efforts, they’re aimed at attracting men to traditionally-female jobs such as nursing by asserting that only “real men” would be able to handle the demands of the job, or emphasizing compatibility with masculinity.

In this case, the occupation that is being framed as highly masculine isn’t one dominated by women; it is, in fact, open only to men: the Catholic priesthood. The image, originally posted at NYPriest, is taken from Fishers of Men, a video released as part of the Archdiocese of New York’s Office of Vocations “The World Needs Heroes” campaign, meant to attract men to the priesthood: 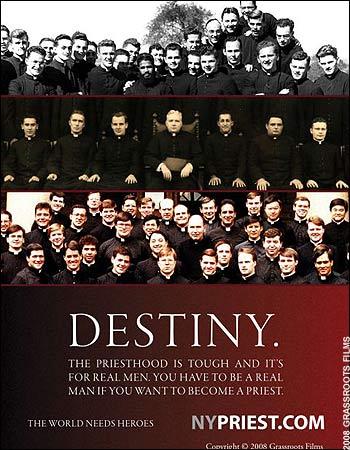 Usually, a male-dominated occupation wouldn’t be in need of having its masculinized character stressed so openly. However, the child sex abuse scandals that have rocked the Catholic Church in the U.S. and elsewhere have damaged the image of the priesthood. Not only did many priests sexually abuse children, but many of the abused children where boys. Had the abuse involved primarily girls girls in late childhood or their teens, the public may very well have expressed revulsion and disgust, but we also have cultural narratives available, such as the idea of the sexually precocious Lolita who entices men against their better judgement, that are often used to at least partially justify or explain adult men’s sexual attraction to or abuse of even young girls (such as the judge who, in 1982, called a 5-year-old rape victim “unusually sexually promiscuous” and gave the adult man who assaulted her only 90 days in a work-release program).

But the fact that so many victims were boys meant those cultural narratives, which implicitly reinforce assumptions about adult masculine sexuality (men can’t quite control themselves; they’re easily led astray by female temptresses, even inappropriately young ones) didn’t apply. Abusing boys undermines the assumption of heterosexuality that is essential to hegemonic masculinity.

Given this social context, it’s not surprising that the NY Archdiocese felt the need to reassert the priesthood as masculine as one element of their image rehabilitation campaign.

Although the masculine nature of the image is important, I think also the whiteness is also quite questionable.

The history of child sex abuse in the Catholic church is hardly the only deterrent to men entering the priesthood. It also requires giving up marriage, children, and sexual relations, and devoting one's life to an organization that is woefully out of touch with the modern world. Sounds fun, huh?

Makes sense.  Where I live religion, especially Christianity, is for women and children.  I would imagine that many churches are having trouble recruiting men.

Y'know, I could understand selling priesthood by talking about one's duty to serve, support and (religiously) protect others as being masculine traits. They're all good traits that are relevant to the priesthood, and they're stereotypically masculine as well. Being a leader is also masculine, and a priest serves as a leader to the people.

And the parenthetical in the first paragraph is so egregious I can't even say. If Jesus stopped the stoning of a woman who was merely accused of committing adultery, I can only imagine what His reaction would be to people who claim to follow Him saying that the violation of a child was her fault.

Being a priest has gone thru' the classic cycle of jobs that used to be male dominated by has gradually become female dominated - notably with loss of power, influence, and status.  In this respect "priest" is like "school  teacher".  But of course, for the catholic church, the actual transition can't happen, so they are left with figuring out how to attract men to a job that us mostly nurturing and has low power, status, etc.

Where I live, the vast majority of new (lutheran) priests are women.

You're right about the pedophilia, but I think you're also overlooking the required celibacy angle. As we all know, real manly men have sex. Lots of sex. All the time. With women. Traditionally, being a Catholic priest was a safe cover for a gay man. It explained very neatly why he wasn't having lots of marital sex and producing children, and instead hanging out with a bunch of other dudes who also weren't having sex with women. But even for straight dudes, our current society really defines "real men" as "manly men" who "have sex with women." And pedophiles or not, Catholic priests aren't supposed to have sex with anyone ever, therefore they are not real men or manly men.

Applications to the priesthood have been falling for years, and the Church is unwilling to allow women to take leadership roles, leading to a pretty big leadership crises. How else to address it but by appealing to real manly men? Maybe eventually the Church will treat women as human beings and allow them to become priests/bishops/etc but until then they're pretty desperate for clergy.

Wow. I know someone earlier pointed it out, but...this poster is really fucking white. Like, not even a token brown person in the corner or something.

Way to be direct about it, Catholic Church! Man=white, Catholic. Everyone else=not "real" men.

I'm not actively involved in current religion, but just from my exposure through media (classic and contemporary), priests and church leaders have been stereotyped as meek and relatively effeminate in pop culture for long before these scandals came up.

Add to that the general feminization of christianity (which I'm sure you posted about in the past) and I can definetly see motivations for this other than pedophilia and sexuality.

"The Priesthood is tough and it's for real men"? Why does everything have to look like an army recruitment ad? Even if it isn't a blatant lie compared to the other "manly men" proffessions, I doubt you'll see the same adjective for nurses anytime soon

The photos in the poster -- where are they from?  Anyone know?

Pretty disturbing, so it's easier to blame sexual abuse on the victim when it's a girl. She "wanted it". When it's a boy, it's tougher to hide, how awkward for that poor priest. Has it occurred to anyone this a great system for child molesters to hide in? Jesus forgives you and gives you fresh children to molest. I am starting to understand why the church is so avidly prolife.

Whenever I see pictures like those I always expect one of the priests to be circled in red with a caption about the latest scandal.  When no one is circled I expect the camera to zoom or cut to the culprit...those are my only two expectations now.

Ridiculously stupid, but it makes perfect sense from the standpoint of a "former" Catholic.  Catholicism has, for as long as I've been alive, been associated with either families who go on Easter and Christmas, and old ladies.  Even as someone who spent 12 years in Catholic education, it was rare for young people, PARTICULARLY boys, to want to do much in the church.  Those who did were mostly doing it for applications to Georgetown or Notre Dame, and were not embodying any sort of Catholic values when they weren't leading psalms (then again, pick out any mainstream Christian religion, and it's all about the same).  Plus, there has been a lot of work lately to bring people "back" to the church.  Many churches are closing because there flat out aren't enough priests and deacons to have one mass per church per week, not that many people attend unless it's a day of obligation or a baptism.  I don't think a lot of it really has to do with the sex scandals specifically, because you can find those in pretty much every denomination of Christianity with similar rates.  But in a culture which seems to be predominantly "all or nothing" when it comes to religion, the relatively moderate world of Cafeteria Catholicism isn't particularly appealing when there are Megachurches to fall out shrieking in, or beds to stay in on Sunday morning.  So, the church has to result to the trendy tactics used in other advertising.

This will hardly change the fact that the mysogynisitc society known as the catholic church is failing...

I find this analysis simplistic at best, offensive at worst. It seems to suggest men who abuse girls get let off more lightly than those who abuse boys, when the whole point about this sex abuse scandal has been how the men involved got away with it for years and years.

Also here is an alternative analysis of the 'real men' trope by Mark Simpson, who knows more about masculinity than anyone here:

"Abusing boys undermines the assumption of heterosexuality that is essential to hegemonic masculinity."

Not necessarily. The ancient Greeks managed both male bisexuality and the boys/youths/young-men-as-objects-of-desire thing pretty well, just by adding the intersection of age. Boys were sexually available to men, but unlike women and girls, were considered worthy of an intellectual relationship and also allowed to attain a status of privilege simply by growing up.

Of course, neither of these things are aspects of the CURRENT hegemonic masculinity, so the molestation scandals do interfere with that.