The Centers for Disease Control and Prevention’s National Center for Injury Prevention and Control recently released a report on domestic violence and sexual assault in the U.S. The National Intimate Partner and Sexual Violence Survey 2010 Summary Report presents the results of phone surveys (targeting both landlines and cells) of 18,049 randomly-selected adults conducted in 2010. The results are predictably depressing: 18.3% adult women have experienced rape (defined as attempted or completed forced penetration) in their lifetimes (for men, it’s 1.4%): 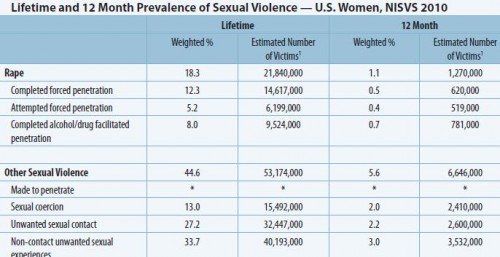 Undermining the stranger rapist myth, the report found that the vast majority of perpetrators were acquaintances or partners of their victims.

As has been found in other studies, Native American women are more at risk than other racial group for sexual assault; in this study, those identifying multiracial had the highest rates of all:

Almost a third of women who are raped are victimized before they’re 18, while over a third are young adults aged 18-24: 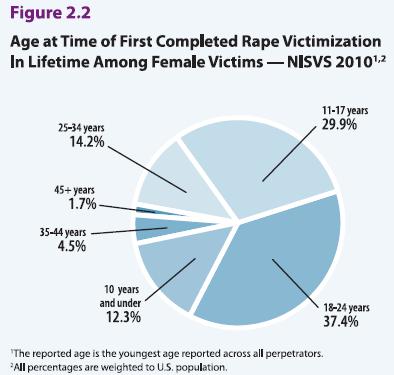 Risk of rape varies significantly by state, though in no state did fewer than 10% of women report being raped. Virginia had the lowest levels of victimization of women, at 11.4%; other states on the low end include Tennessee, Delaware, and Rhode Island. Worst was Alaska, at 29.2%, with Oregon not far behind at 27.2% and Nevada at 26.1%.

The report also include information on stalking and domestic violence; 16.2% of women and 5.2% of men report at least one incident, overwhelmingly from an intimate partner, while over 30% of women and 25% of men have been slapped, shoved, or pushed by a partner.

It is a singularly depressing read about the state of men’s and women’s intimate lives.

I think, actually, it is 42% that are victimized before they are 18 (combining the under 10 age group with the 11-17 age group) which is appalling.

Seems rather disingenuous to count "attempted forced penetration" as rape, but not "made to penetrate"...

A phone interview is not an appropriate way to measure IPV.  You're missing all the women who wouldn't feel comfortable answering the questions in their home.  Furthermore, I think that your discussion for this page should also include male responses.

I'm amazed at how low the figures seem for non-rape varieties of sexual assault. What woman hasn't experienced unwanted sexual touching or unwanted non-contact sexual experiences? These are virtually 'routine events' in public spaces and on public transportation in a major city.

This is really picky, but how is the pie chart organized? The order of the sections seems random. I think it would be a lot easier to parse the data it shows if the sections were in order by age group or size.

(Depressing) Chart of the Day: One in Four American Women is Sexually Assaulted « Kay Steiger — December 15, 2011

[...] depressing chart comes via the Centers for Disease Control report (highlighted by the folks over at Sociological Images) that looked at intimate partner violence in America. For lots of women, the statistics won’t [...]

That they had to specify "first completed rape victimization" makes me extra sad.

I wonder why multiracial womyn are the highest. Maybe it has something to do with more Latinas identifying themselves as multiracial to acknowledge their indigenous roots? And that group of womyn are under conditions that make them more prone?

Infographic: How prevalent is intimate partner violence in the U.S.? | Journeys towards Justice — January 10, 2012

[...] infographic was created specifically for my blog; the statistics and data come from this Sociological Images blog post on the CDCP report and the National Intimate Partner and Sexual Violence Survey 2010 Summary Report. Related [...]