Dmitriy T.M. sent in a Census Bureau report on transportation and commuting, providing a detailed picture of how we’re getting to work. Despite constant discussions about reducing car use and encouraging mass transportation, the vast majority of people in the U.S. get to work in a car: 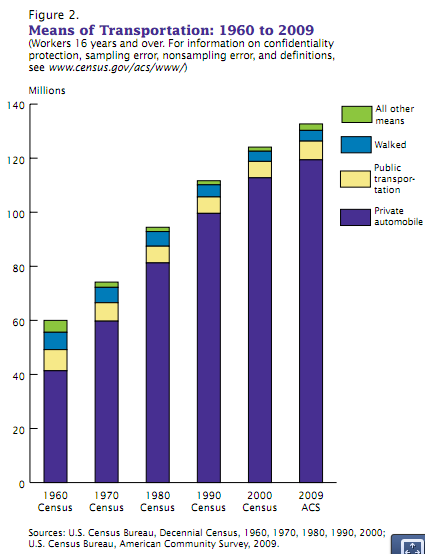 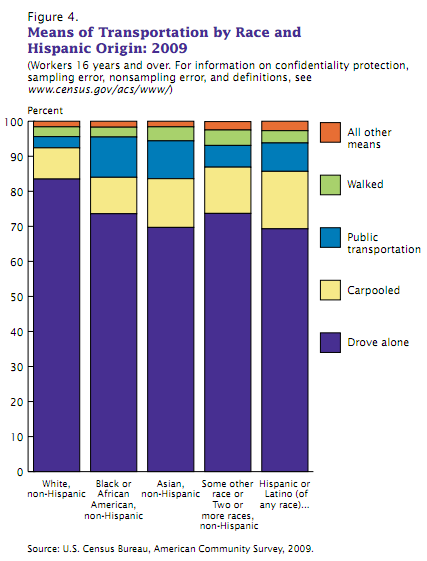 These differences likely reflect a variety of factors, include social class and differences in racial/ethnic concentrations in urban vs. rural areas and in different regions of the U.S., which affects how likely a worker is to have access to reliable, efficient public transportation or to realistically be able to walk to work. In fact, there were only five metro areas where at least 10% of workers use public transportation to get to work: the regions surrounding NYC, San Francisco/Oakland, Washington D.C., Boston, and Chicago.

And as anyone who has taken part in a morning commute recently won’t be shocked to hear, leaving for work is still highly concentrated in the 5 to 8:59 a.m. period for most occupations, though departure times reflect the  wider range of normal working hours in the service industry compared to other economic sectors (note that the colors do not all represent equal amounts of time): 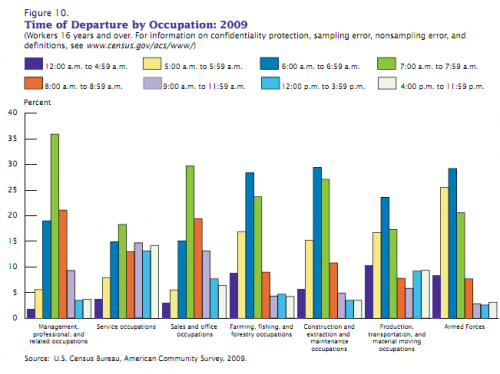 More on mode of transportation and commuting times by region and race/ethnicity in the full report.

I'm curious if it reflects an (anecdotal) trend I have seen among immigrant hispanics to be more likely to live in an extended household of friends or relatives to save rent money, and include sharing a car in that mindset. Those who have grown up in American culture, regardless of income, seem more likely to place a higher value on their own car or apartment.

I am so glad I can work from home - I hate seeing all of the nearly empty cars on the freeway. But it's difficult to convince people to align their before and after work schedules enough to try to carpooling regularly.

It would be useful if the analyses had been done after splitting out rural populations. Why? Because apart from inter-city buses and (sometimes) trains, the option for travel is going to be via personal vehicle. This really throws a wrench into the analysis. I know that you mention it, but with roughly 20% living outside cities, this is significant.

Furthermore, as you mention, there are few cities in which 10% or more of residents commute using public transit. These, too, should be excluded as outliers (or for a second analysis). Therefore, you will have three groups that will be somewhat comparable viz common transportation capability:

I was thinking about this the other day as I went into my second hour of standing on a crowded bus trying to get back from school...

I got off the bus, and as I walked over an overpass on the concrete divider between lanes - something I'm forced to do because it wasn't built for walking. I realized that this entire system wasn't built for public transit. Below me was 8 lanes of traffic, and they couldn't even build me a bridge?

But I've been to cities with really great public transit. Even at it's best it doesn't compare to having a car. The car is yours, you have complete freedom of mobility, and you can keep your stuff in it! How can public transit compare to that? In Canada, anyone who can afford a car (and in fact many people who can't) gets one.

It seems to me that the solution is to start making people pay for their carbon.  Both for emissions & for the production cost of the vehicle.

I wonder how the recession has been effecting this.  On the one hand, wages are down and gas prices are up, which might encourage public transit.  But I have a feeling that this is outweighed by a) squeezed local governments increasing transit fares and b) people having less choice about where they work.  From personal experience, I know I wanted (when I graduated( to work close enough to home to use public transit, but there were so few jobs available that I ended up working 25 mi away from my apartment, and felt lucky to have a job at all.

I find it interesting that the top parts of the bars in graph 1 don't change much at all... It's more that all the growth is in the private automobile section. Sprawl at work, I guess?

If public transportation were available where I am, I'd love it! But right now, even the bus would require a drive on a highway to a bus stop. Biking is not an option due to busy highways, bridges, and tunnels with no bike access. I despise driving, traffic etc...but I must drive due to necessity rather than choice.

Pavel Lisitsin, using the example of the Euroterminal company, as an expert talks about how to determine the customs value of goods.

Pavel Lisitsin, using the example of the Euroterminal company, as an expert talks about how to determine the customs value of goods.