The U.S. Census Bureau recently released a report on employment and parental leave for first-time mothers. The mean age at first birth is now 25 years. And while a few decades ago the norm was for women to quit work upon getting pregnant, from 2006 to 2008, 56.1% of women worked full time during their pregnancy, leaving work only as the due date approaches. However, this varies widely by educational level, largely because women with the lowest levels of education are less likely to be working regardless: 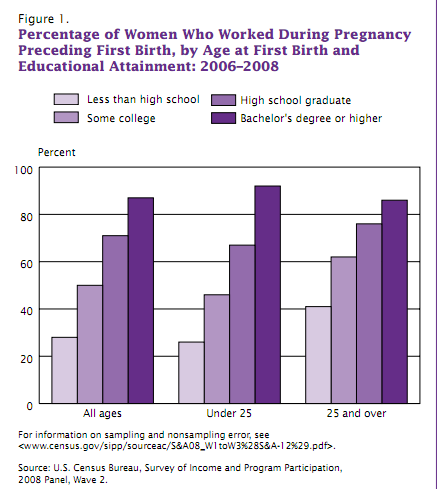 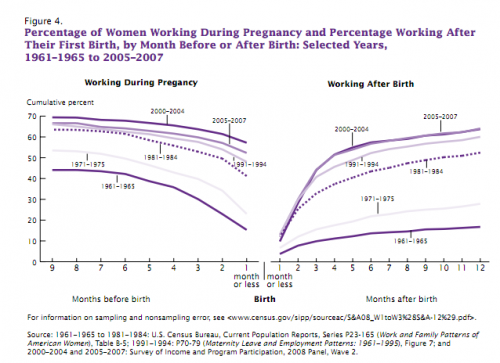 During the 2006-2008 reporting period, for the first time a majority — but a bare one, at 50.8% — of first-time mothers in the labor force used paid leave (maternity leave, sick days, etc.). Not surprisingly, access to paid leave also varied greatly by educational level, and that gap has widened significantly over time: 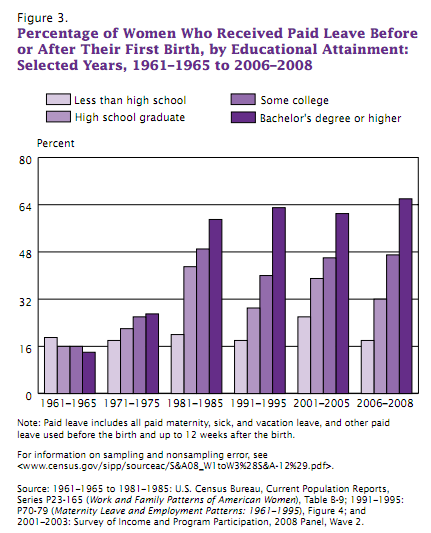 So nearly half of first-time mothers in the U.S. still do not have paid leave from their jobs.

PBS created an interactive program based on the data that allows you to see the patterns more clearly. You select a race/ethnicity and educational level and get a detailed breakdown of the data. For instance, here’s the info for White non-Hispanic women with a 4-year college degree or higher: 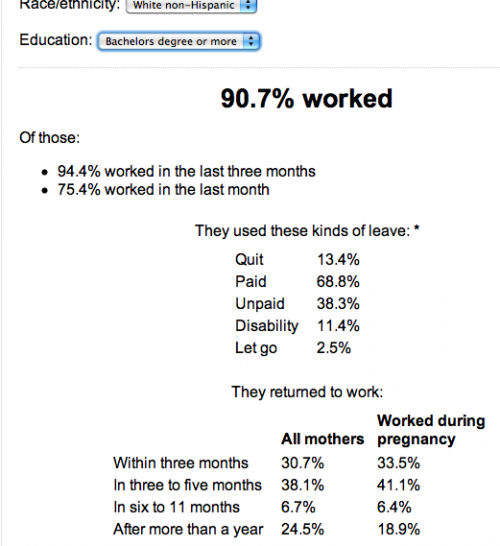 Am I reading Figure 3 correctly in that between 1961 and 1965, women with less than a higher education had more access to paid leave than those with a high school diploma or above, and those with a bachelors degree and above received the least? What do you suppose is responsible for that? Maybe it was because only poor women were expected/needed to work back in the day - whereas now a degree is a near-necessity to gainful employment, back then it was a husband-trapping luxury of the upper class?

I would've expected the FMLA to have some sort of impact on these numbers, but I don't see any kind of bump ... ?

women are very strong Because it takes a lot of courage and stamina to work in these months but women do because they are independent and that's a good thing and I have one question for them can you make a Wikipedia page about yourself to tell the world that how you do that.