Auctions and the Social Construction of Value

I don’t know the sociological research on auctions — surely it must exist — but auctions seem like a wonderful illustration of how value is socially constructed. I didn’t really need to be convinced that people don’t always live up to economists’ ideals of rationality, but I was reminded of it on Saturday when I watched the auction of items from my mother’s “estate” (i.e., stuff in her apartment). I wasn’t in the actual auctiion room; nowadays you can watch — and bid — online.

As someone who is relatively ignorant about art, I of course was puzzled as to why one piece was worth several hundred dollars while another might fetch only a $50 or no bids at all. But I thought that potential buyers would have an idea of how much something is worth — the objects and information about them are all available beforehand — and they would bid and stop bidding according to these prior valuations. But look at this lithograph, which graced my parents’ wall for as long as I can remember. 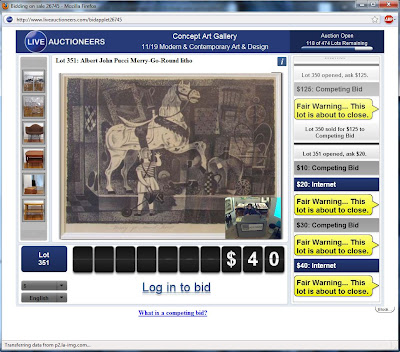 The opening asking price was $20.* None of the people at the auction house or online would offer that much. For the potential bidders, the picture was not worth $20.

The auctioneer then lowered the opening bid to $10. Someone offered the ten bucks. A bargain. But then someone else bid $20. The picture which had not been worth $20 suddenly was. And then it was worth $30. You can see the bidding history to the right of the lithograph. The bidders were reluctant — twice someone came in just as the gavel was about to come down — but in the end, the picture that nobody thought was worth $20 eventually sold for twice that much. In the interval of a few minutes, this minimal interaction between bidders had quadrupled the value of the picture.

There’s also a cognitive-dissonance explanation. If I bid $10 for the item, I’m not just telling myself, “I think this picture is worth $10.” Instead, the message is more general: “I want this picture.” Once we decide to buy something, our subjective valuation of it goes up – we’re more comfortable thinking that we got a good deal than thinking that we wasted our money. Most transactions end there; we buy something at a price, and we are happy with it. But an auction encourages us to turn that subjective valuation into hiigher and higher cash bids.

* It can be a bit daunting, depressing even, to think that a picture so familiar that it feels like a part of your life turns out to be worth so little to other people.

I think this might have more to do with value anchoring than social forces per se.  Or at least - you don't need the "social" to get this behavior.

Mint.com has a pretty nice introductory blog entry on anchoring here: http://www.mint.com/blog/how-to/price-anchoring/
Also - re: the cognitive dissonance explanation of this effect - you don't actually need a dissonant cognition to get to that outcome (and I'm not entirely sure what cognition you think is the dissonant one here).  Check out foot-in-the-door stuff, where making any kind of commitment actually just makes you likely to make future commitments.

I think the auctions you're describing are very much like a classic foot-in-the-door negotiation, where you're given opportunities to make additional commitments after the initial ones.

So - in my mind - it's the combined effect of re-anchoring along with the price adjustments and the momentum caused by previous commitments that gets you to bid more than you might predict or prefer.

[...] This post caught my eye however, because I think it’s doing something interesting that many of us socially-focused researchers do, sometimes uncritically: assuming processes are social simply because other people are around. [...]

There are all sorts of interesting social reactions going on at auctions, but as an auction newbie you mind find it very difficult to spot them.

Bear in mind that at any given auction there are likely to be a significant number of dealers attending.  They likely all know each other and each other's buying patterns, being in the trade.  They are unlikely to get swept away in the moment, because they do this for a living every day.

They are also very aware of the typical behaviours of private bidders and can usually read them quite well.  They may even "bid up" items if they see someone in the throes of auction fever or (in rare cases) out of malice against a fellow bidder who is known to them.

There may even be an illegal ring in operation - almost impossible for an inexperienced outsider to spot.

This is a very simplistic analysis of a much, much more complex game.

There is a really interesting book called "Seven Days in the Art World" by Sarah Thornton. She talks about similar issues through an active participant lens. I find it fascinating how modern art by living artists gets its value.

Auctions aren't the best place to gauge the value of an item and a whole series of weird things come in to play during bidding. I've been to many auctions where the auctioneer will start at $50, then slowly drop the price till someone bids at $10 and the piece will go for hundreds in the end. It's all about the bidders trying to send a message to the other bidders, with their primary goal being to pay the lowest possible price. And even then strange things can happen, I was at an auction the other day where anything even vaguely antique sold for hundreds (to dealers) frequently fetching higher prices than I would expect the dealers to sell for. Then I snapped up a chest of drawers for $5 (I realised it was better than the others realised) and ended up selling it to another dealer who had been at the same auction (before the end of auction) for $100.

Auctions are about money and psychology, not value or worth - and who is there on the day. I think your lithograph was probably worth a lot more than it sold for, and at another auction on another day it might have got a lot more - or a lot less.