“Just another example of how children are placed into gender roles,” writes Belinda, who sent in this page from an Australian Kmart catalog:

The girls are, of course, dressed in “pretty” costumes, such as a fairy, a ballerina, or a ladybug. Or they placed in a “domestic” role, such as the cook. The boys however get to be a pirate, a police officer, a doctor or a firefighter. Unsurprisingly, the boys are mainly dressed in costumes that are actually plausible career options, the girls however are placed in the domestic sphere or the realm of fantasy. 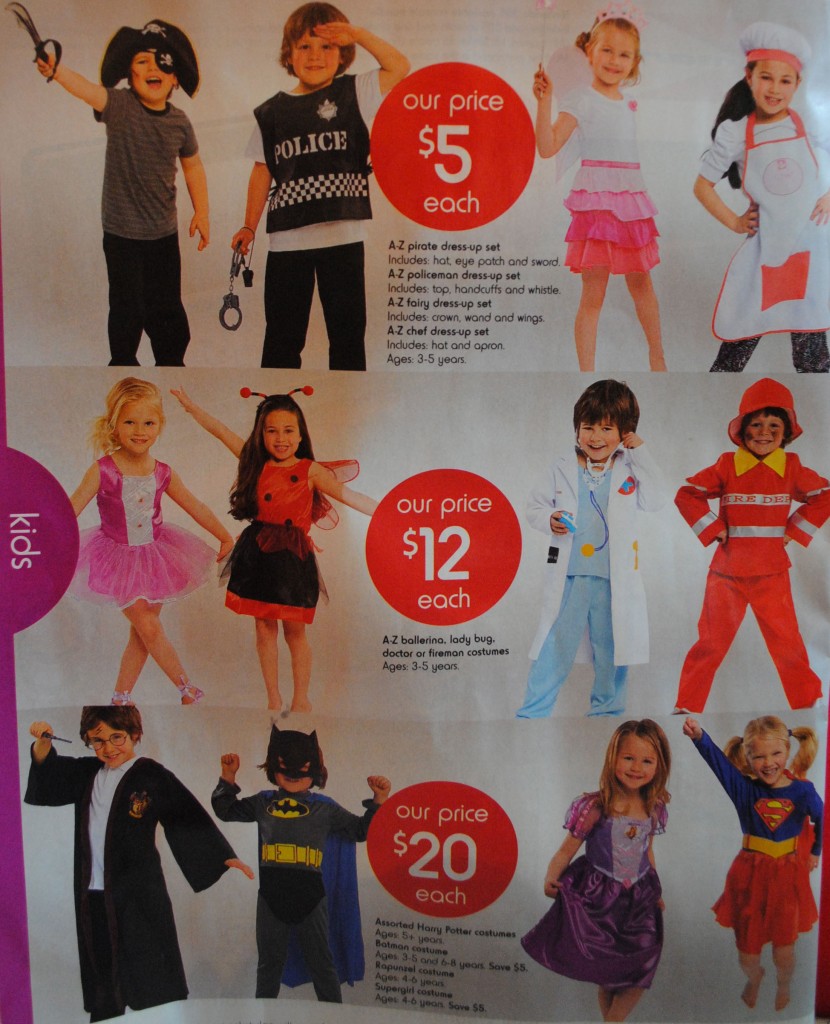 Pirates, wizards, and Batman are career options?  Tell me where!

There's a supergirl down there

This pattern says disturbing things about the cultural messages we give our children. We encourage boys to fantasize about taking on roles that require the cultivation and exercise of skills and that prepare them for public life as adults. We encourage girls to fantasize about being looked at and admired passively. I feel so very sad for girls growing up today -- things have gotten so much worse for girls and women over the last couple of decades, to the extent that, as female persons, we are now denied the chance to learn to relate to ourselves as non-objectified, agental subjects in almost every sphere of life -- even in our own imaginaries, even on Hallowe'en.

True enough,that the marketing of Halloween costumes tend to be gender specific but is also true that if a girl wants to be a fireman or police officer for Halloween they can be with no or little backlash.The same is not true for boys who would want,let say be a fairy.So the market would say"Market and sale according to what the general public would expect and let those who would want to be different create there own or buy what they think suitable for themselves and their children."

How can you tell who are boys and who are girls?

Note: I appreciate what you're doing here, but--well, maybe I'm being too picky--I'm bothered by the "girls are placed in ____" vs. "boys get to be ____". Definitely privileging traditional male roles over female ones (some women like being pretty pretty princesses, don't hate) and potentially taking away little girls' agency. The point being, both boys and girls are unfairly forced into these roles, firefighter vs. fairy or whatever. It's not like little boys are told, "hey, you can be whatever you want" and they chose firefighter and the little girls were left with the dregs. They're both being pushed into these gendered roles, and it's probably much harder for a boy to chose to be a princess than for a girl to chose to be a firefighter. The phrasing "boys get to be" implies the opposite, though, and, I think, obscures larger issues.

Man am I a nitpick or what/diatribe

They missed the little girl dressed as Superman. I still agree with the overall point, but kind of conspicuous in it's absence from the commentary.

Pirate is a career option?

The weirdest gendered costume I've seen is peacock costumes for both little girls and grown women. Wait... you're going as a male bird?!? Guess a peahen would be too hard to explain.

The one thing I do like about this, despite some of the gender stereotyping, is that the girls are placed in active poses. They are facing the camera or "doing stuff". I'm especially glad that they advertise a SuperGirl costume!