Dress Up Your Little Girl Like a (Sexy) Adult Woman

Would you like to buy your little girl a costume that suggests that she has gone through puberty and is attempting to attract the sexual attention of adult men?  Who wouldn’t!?  Not an ounce of subtlety here: 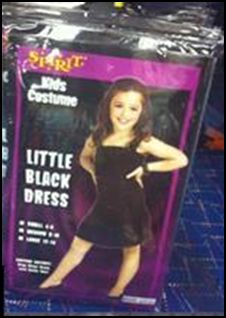 At Fail Blog, sent in by Laura.

This kind of thing always reminds me of Lauren Greenfield's work.  She's a photographer who focuses (pun intended) on what she termed, the "Fast Foward Generation."  http://www.laurengreenfield.com/index.php?p=VBD4U4RE

Scary stuff, to be sure.

There's an overlap here with the controversy about "toddlers in tiaras"...beauty pageants for very young contestants that often feature girls in faux boobs, etc.

While it's disturbing to see this, it's also disturbing in how you write about this:

Yes, it's shocking. Yes, the little black dress does have a lot of social connotation with womanly sexiness and sexuality. However, at least in the circle of friends I have, there is a very clear distinction between being sexy and seeking "the sexual attention of adult men". Indeed, if I recall correctly, the distinction has been written about (and championed) on this blog and blogs like it.

But yes, again, it's shocking to see the juxtaposition. Especially so because we don't expect that a girl so young understands much about sexuality in the sense as conveyed by the little black dress, while the parents (who presumably purchased the costume) do. Still, you shouldn't let this be a reason for sloppy writing that -- if it were relating to the normal context of the little black dress -- would be problematic in its own right. In other words, would we be saying that women who wear a little black dress are doing it solelybecause they are "attempting to attract the sexual attention of adult men"?

It's a costume that replicates a piece of the adult world. True, it skirts close to the distinctions between sex and sexuality, but the clothing -- in itself -- does not mean that the girl is seeking adult male sexual attention (nor that the mother is trying to do it either).

How is this even a costume? Is it meant to be a costume on it's own? I could see why a halloween store would sell it- a black dress might be a good base for lots of other costumes (such as a witch). And given how much little girls clothing comes exclusively in pink and pastel shades, it might be hard to find a plain black dress at a regular store. But on it's own it's hardly a costume at all. I mostly just find this confusing.

Not sure what to think about the costume (sort of inappropriate, sort of cute, sort of stupid), but I definitely find the commentary tiresome.  I'm sick of this idea that every time a woman wear clothes other than XXL sweatpants she's primarily doing it for the attention of men.  Do some women?  Sure.  But that ignores huge swatches of the female population (lesbians, women in committed relationships), and also just how society works around our gender lines.  In reality, I find very little thought is directed at men when it comes to women wearing trendy or fashionable clothes.  Frankly, if we JUST wanted attention from men, we'd all run around naked with natural makeup on.  There is more to a "LBD" (or any fashionable item of clothing for women) than "does a man think I look sexy hawt bananas in this?"  Honestly, a more accurate stereotype I've heard is that women usually dress up for other WOMEN than for men.  And of course, that's without even taking into account that women might be dressing for the situation, the current trends, and herself.  The little black dress has rarely been presented as a sex icon; it's seen much more as a fashion icon.

And yes, little girls do dress as adult women sometimes.  Dress up is a pretty basic part of being a child, and most children want to be grown ups or teens, because those stages of life are equated with power, beauty, fun, and freedom.  However accurate that is for an adult's POV, most kids want to be like mommy or daddy, or some other adult role model or media figure they look up to.  Most of what children dress up as are adult, or maybe teenage, tropes.

I find her feet rather intresting. It's not that clear, but it seems like her stance is even imitating the one you get when in heels.

I see a few commenters claiming the ubiquitous little black dress is not inherently sexual. I agree that a black dress can be a versatile staple in a woman's wardrobe. But if that's all it is, then why do we call it a LITTLE black dress? If the point/defining factor of the dress is that it's adaptable for various occasions, why don't we call it a go-to black dress, or a basic black dress? Because those words do not sexualize the wearer. Plain and simple.

I'm a bit disturbed by this post, but it has nothing to do with the costume.

Like many of the alarmist threads about the "sexualization of children" - some of which pose genuine cause for concern - the overwhelming subtext idealizes childhood as a period of sacred innocence which adults must strive to shield from even the most indirect and superficial trace of sexuality and adult behavior. However, even without the influence of media saturation, this is arguably unrealistic, and tells us more about the prevailing attitudes toward sex than it does about child psychology.

Taking the example above, should we be bothered by the possibility that a child might enjoy play-acting the aesthetics of the adult world just because those aesthetics are naturally shaped by sex? After all, children don't live in a parallel sphere detached from our reality - they coexist with us in the adult world, they notice our behaviors and our social roles, and their imaginations are a constant inquiry into their evolving place in it. The allure that a "little black dress" would have to a child playing dress-up would simply not exist if the image were not already entrenched among the adults that she (or he, as it were) is exposed to.

And this is, in my opinion, OK. The glaring double-standard around gender is very problematic (there's no equivalent way for boys to act-out "sexiness") but it's only a reflection of the same inequities existing among adults. These norms are archaic and often absurd, and the sooner kids work that out in play, the likelier they might be to grow up subverting them.