In his book Political Process and the Development of Black Insurgency, 1930-1970, Doug McAdam discussed the combination of social and political factors that facilitated the emergence, and significant successes of, the Civil Rights Movement. One of his arguments is that discussions of the movement often overlook the way that non-violent civil rights protesters were able to strategically use violent responses by white supremacists as a resource. While in some cases violent responses were unexpected, most of the time activists understood that they were likely to be met by violence. In fact, McAdam argues, many activists counted on that public brutality. Images such as Sheriff Bull Connor’s officers turning fire hoses and police dogs on non-violent protesters galvanized public opinion in support of the civil rights movement and produced the political pressure necessary to push an often-reluctant federal government to intervene. Thus, McAdam argues that public use of violence by state authorities against protesters can provide essential tools for social movements: a visible, concrete sign of repression, evidence of the vulnerability of citizens in the face of a brutal, intransigent state, and dramatic images that draw media and public attention.

I thought of McAdam’s book when Dmitriy T.M. sent in a link from Five Thirty Eight about how police actions affected media coverage of the Occupy Wall Street protests. The article was written on October 7th, so it doesn’t include the impacts of the most recent clashes with police, particularly the Oakland PD’s tear gassing of OWS protesters a couple of nights ago. But already, a noteworthy pattern was emerging. Nate Silver looked at OWS coverage in a database of about 4,000 U.S. news sources. He found that media coverage was basically nonexistent until NYPD pepper sprayed some protesters. Coverage shot up again after NYPD arrested a few hundred protesters on the Brooklyn Bridge on Oct. 1st and after more incidents on Oct. 5th: 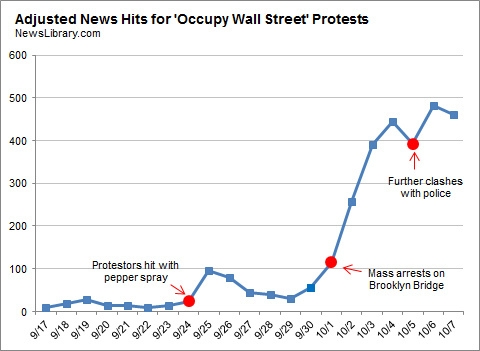 As Silver points out, we can’t discern any clear causality here; perhaps media coverage would have gone up over time anyway. But coverage of OWS doesn’t show a smooth, slowly-increasing trend; coverage jumped after each of these instances of violence, and after the Brooklyn Bridge arrests, remained much higher than it had been before. At the very least, it appears that violence by the police drew media attention, providing an opening for the concerns of OWS protesters — and the persistence and growth of OWS protests around the country — to be defined as legitimate news stories in their own right.

UPDATE: For more on the persistence of the OWS movement and protesters’ tactical and organizational skill, check out Steven Vallas’s post at Organizations, Occupations and Work.

I think an important mechanism that might be missing here is that the police repressions are being simultaneously broadcast via the internet, spurring on solidarity actions around the country.  For example, the occupy movement in Lexington, KY had their first action right after the pepper spray incident.  This caused the local media here in KY to talk about OWS, not directly in relation to the violence, but in relation to our local solidarity action against the violence.

The WTO, G8 and G20 protests always have violent clashes with police. But it seems to me they mostly get bad press. I think there is something to say about the work that is going into telling the Occupiers side of the story in these clashes.

I know personally that having video footage and live tweets gives me a very good understanding of the protesters side of the story.

I have to say that the point in this post also happened during last winter's revolution in Egypt: public opinion of the protests was mixed and often quite negative for the first few days, but that changed radically the first Friday of the protests, when the police water cannoned protesters while praying. That was a watershed PR moment for the protests and seemed to play a pretty crucial role in turning it into a true revolution.

The Labor of Protest: A Comment on Walker and the Occupy Movement « Organizations, Occupations and Work — October 31, 2011

[...] into the movement dynamics in very interesting ways. Readers will want to visit our sister blog, Sociological Images, for a very interesting story by Gwen Sharp, who presents a provocative graph charting what seems [...]

I just used the same graphic in an essay I wrote for Footnotes (to come out in the Dec Issue), and while I don't dispute that police clashes get coverage, I think there are multiple variables at play during this particular time period. Particularly, the dramatic increase in the number of cities with encampments and the number of participants. I think Silver has oversimplified somewhat, and we get a peek at this looking between 10/1 and 10/6.