Fetishizing People of Color: The Downside of Positive Stereotypes

A confession to PostSecret this week inspired me to add to and revise this post from 2009.

I have posted before on the way that black people are fetishized in the U.S.  It is as if they are, literally, more colorful, more interesting, cooler, hipper, even spicier than white people.  Whites, in contrast, can seem bland, boring, vanilla, even whitebread.  From this perspective, being a “boring white” person can seem, well, boring.  Both of these confessions can be read as suggesting as much (though there are surely other readings as well): 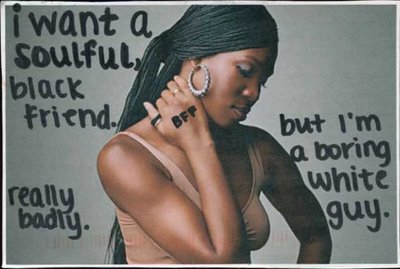 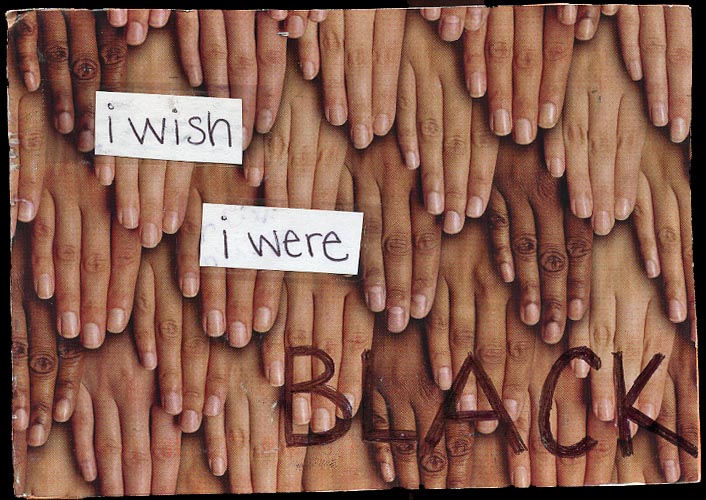 It’s important to remember that this projection of soulfulness and other positive characteristics onto black people specifically is problematic, even if it’s not derogatory (for posts on the “magic negro,” see here, here, and here).   People of color often report that they feel like white folks are friends with or date them specifically because they aren’t white.  This is no compliment.  Most of us desire to be friends with people who see us as individuals and not stereotypes.

I think this post fails to address the obvious meta-critique: by being on a site in which people post their secrets (Postsecret!) the author of this clearly understands that what he wants is problematic.

I've been trying to come up with the phrase "magic negro" all weekend, thank you for bringing it up today. I've had tip of the tongue syndrome over it after watching "Fireproof" with Kirk Cameron (gag - I was told there would be FIRES, not a beat-me-upside-the-head-with-a-club religious message).

Anyway, there were so many "magic negroes" in that movie, it was like an NAACP sponsored Harry Potter convention. Every black character in the whole thing was magical, and there were several. I couldn't quite explain to my husband why it was an annoying stereotype. He thought the movie portrayed black people positively, but after reading to him from your blog today, he understands what I meant.

Also, we have no idea if the image above was even done by a "white guy".

It does say "I'm a boring white guy" right on the postcard.

I have never seen a guy's handwriting look like that.

mordicai, I don't think that's neccesarily true (although it could be). I've seen positive and negative secrets on postsecret, and secrets aren't universally problematic.

I have never seen a guy’s handwriting look like that.

...I don't get your point. It's secretly written by a boring white girl?

It could be written by anyone--Post Secret submissions don't have to be actual confessions. Someone maybe just saw that image and wanted to use it with a provocative caption.

@mordicai, even assuming that the author of the postcard considers it problematic, we don't know that that is because he recognizes how his desire is othering. It could be that his actual friends are a little less naively racist, for example.

I wonder where the character of Frank in Samantha Who falls in terms of the "magical negro" line of thought. The most recent episode might be worth some thought ... the protagonist's cavalier/naive attitude towards racism (it was almost treated as a fashion faux-pas) made it interesting, but probably not in the way it was intended to be. Not that Samantha Who typically tackles any deep moral issues with any sort of nuance, but they did invite this kind of critique by having an entire show about racism.

Why would anyone want to be friends with a 'boring white guy' anyway?

The "i wish i were BLACK" postcard could have been written by someone who is Asian, Native American, multi-racial... or some other racial category other than white.

The overall point is not necessarily lost, and it seems like a safe assumption that it came from someone who is white, but...

Conversations about race often follow a racial binary of white and black, and that is its own problem.

"People of color often report that they feel like white folks are friends with or date them specifically because they aren’t white."

I'm interested in this -- are there any published studies that support this idea?

"People of color often report that they feel like white folks are friends
with or date them specifically because they aren’t white."

Is saying "folks" okay now? Could I say "black folks" in the same context and not have my comment derided?  I wonder.

How do we know the second one is about fetishisation?

From http://en.wikipedia.org/wiki/Magical_Negro
The Magical Negro or magical African-American friend, is a supporting stock character in American cinema, who, by use of special insight or powers, helps the white protagonist.[1]
African-American filmmaker Spike Lee popularized the term, deriding the archetype of the "super-duper magical Negro" in 2001 while discussing films with students at Washington State University and at Yale University.[2][3] The word "Negro", now considered by many as archaic and sometimes offensive, is used intentionally to suggest that the archetype is a racial throwback, an update of the "Sambo" and "Noble savage" stereotypes."
-snip-

From two of the links that Lisa included in this post:

the [Black' character's’]" main role is to facilitate the moral
development of the White character through their wise advice and unending
patience."

In contrast, the hip Black friend is a friend who is-to use that same word- "hip".
From http://en.wikipedia.org/wiki/Hip_(slang) :

"Hip is a slang term meaning fashionably current and in the know. Hip is the opposite of square or prude.

Hip, like cool, does not refer to one specific quality. What is considered hip is continuously changing. The term hip is said to have originated in African American Vernacular English (AAVE) in the early 1900s, derived from the earlier form hep.

Despite research and speculation by both amateur and professional etymologists, the origins of the term hip and hep are disputed."

As proof that White folks as a population not only think that Black people are hipper than they are, but act on that opinion, I offer the way that mainstream (meaning White) American culture continually incorporates Black slang, Black music, Black dance, and Black fashion into the mainstream of the US and from there to other societies around the world. Why is this? Maybe it's because that slang, music, dance, and fashion is considered to be "fashionable current" and hip.American culture would be quite bland were it not for the continual influsion of Black innovation-take American music including but not limited to old time banjo & fiddle music, Blues, Ragtime, Jazz, Rock & Roll, R&B, Zydeco, and Hip-Hop. White folks can change the referent of Jazz to Swing but that music and dance largely came from hip Black folks.

Yes, people should want to be friends with other people because of those people's personalities and not their race/ethnicity. But it strikes me as fake colorblindness to disregard the fact that the reason White people generally consider Black people hipper than White folks and the reason why Black people agree with this assessment is because we Black folks have been in the past and continue in the present to be more culturally innovative than White folks.

This is dumb, what about white people being fetishized, or Asians, or Jews, or....
Please find something intelligent to research.

Fetishizing is used both by Marx to describe the power given to commodities in Capitalism, whereby they seem to have inherent value. Freud uses it to describe the perverts distorted sexuality. I have no idea how you are using it, smacks of lazy fuzzy thinking. A black person is a fetish? For whom? The white person? So is this like the pervert? Follow through your logic, don't just throw around jargon.

What we have here, on it's face, is someone so insecure, so pathetic (in the literal sense) that he abases himself as 'just a boring white guy' who wishes, per impossible, that he was black. My God, how tragic... And then what we get, perversely, in a pile on to this victim.

why does it say "friend" and bff on the first card when there is a woman pictured?Either they added a wrong image to an anonymous post or this person is a hypocrite who hides his fetishism behind the innocent word "friend". To be honest I find it rather unlikely that his interest is platonic. I just find it very unlikely that a man feels the desire of having a female friend with the specific attribute of being "soulful" without any sexual interest.
Also I'd like to ask what the definition of the exact difference is between fetishizing an ethnicity and having a certain type? Can you blame someone who e.g. says "oh I love brazilian women!they are so asdfghj"?? How can someone express her or his preferences correctly?

Most of us desire to be friends with people who see us as individuals and not stereotypes.

I think two very different things are being conflated here:  the way we feel about our actual friends, and the way we imagine hypothetical friends that we'd like to have.

We can't see someone as an individual when they are only a figment of our imagination. Pretty much everything we think we know about a complete stranger's life experience is at least subconsciously gleaned from stereotypes. But that's not to say that admiring a stereotype automatically precludes us from valuing the individuality of a real friend whom we might associate with it.

Also, we have no way to know if the first PS'er longs for a friend who is both soulful and black, or if he truly believes that black=soulful. His comma steers me toward the former. However, it's easy to presume the latter because it reflects a common stereotype. Had he said, "I want a shy, black friend" or "I want a soulful, Korean friend," we probably would have read it more as an odd list of specifications rather than a mere fetishization of a pop-culture archetype.

I scrolled through the first few ads and understood the point, but when I got to the clothing ads I just couldn't see what the problem is. Just what would be a "good" clothing ad with respect to skin color? Is there something wrong with a clothing company showing its clothes on people with different skin colors in the same ad? Is that somehow NOT a victory against racism? What positive standard are these clothing ads being judged against?

I keep coming back to that line in "From Dusk till Dawn": Are you such a loser, that you can't tell when you've won?

What's wrong with me? I have never found anything proud to be a "white".

I have a few black friends. They are all different. I don't think a positive stereotype is necessarily a bad thing - it is a way to bridge a difference, but once you become friends with someone, you open yourself up to knowing the real person. As an example, my parents came to the US from India. So when I meet people they often go with the "Indians are smart" stereotype, which is not a bad one and I am actually fairly smart (when it comes to "book learning") but not so smart when it comes to common sense. But the thing is, once someone hangs out with me a few times, the stereotype ceases to matter because they actually get to know me, and vice versa.