It’s the kind of finding to warm the hearts of us liberal, Larry-Summers-hating,  gender-egalitarians.  Summers — you saw him in “The Social Network” as the Harvard president who had no patience for the Winklevoss twins (he didn’t have much patience for Cornell West either and probably many other things) — suggested that the dearth of women in top science and engineering positions was caused not so much by social forces as by innate sex differences in math ability (more here and many other places).

As others were quick to point out, those differences are greater in societies with greater gender inequality.  That’s why the math gender gap in the U.S. has become much narrower over time.  In societies with greater equality, like Sweden, Norway, and Israeli kibbutzim, the male-female gap in math disappears.  But even in those societies, males still score higher on one type of mathematical skill: spatial reasoning. 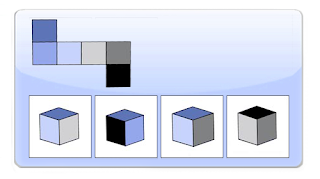 I’m sure that evol-psych has some explanation for why male brains evolved to be more adept at spatial reasoning.  I’m equally sure that those who favor social explanations can find residual sexism even in Sweden to explain spatial differences.  That’s why a field experiment reported last summer is so interesting.

The research team (Moshe Hoffman and colleagues, pdf) tested people from two tribes in northern India — the Karbi and the Khasi.  These had once been a single tribe but had split recently — a few hundred years ago.  (Recent is a relative term, and we’re talking evolution here.)  So they were similar economically (subsistence farming of rice) and genetically.

Researchers went to four villages of each tribe, recruited subjects to solve this puzzle: 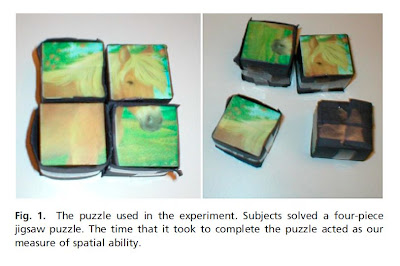 They offered an additional 20 rupees if the subject could solve the puzzle in 30 seconds or less.

In the patrilineal society, women were much slower to solve the puzzle than were men.  But among the matrilineal Khasi, the difference was negligible. 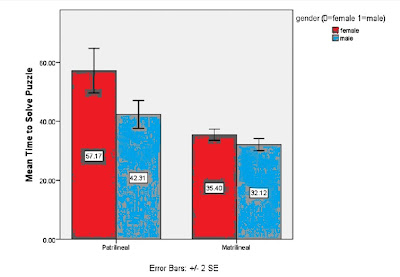 I’m not sure how much weight to give this one study, mostly because of sample size.  Is the sample the 1300 villagers who worked the puzzle?  Or is it 1 – one inter-tribal comparison? But the results are encouraging, at least for those who argue for greater gender equality.

The sample size is indeed 1300, but caution needs to be exercised in applying the result to people who are not measures of the sampled populations (anyone not of these two tribes). I doubt that their social structure is the only difference between them.

This is too small a sample to imply anything about anyone else- especially when the desired comparison is "all women versus all men."

What I find interesting is that both men and women of the the Khasi (matrilineal) did better than the Karbi's (patrilineal) best gender (in this case male).  Does collaboration between genders to better overall gain?  I would think "duh" but it would be nice to see more similar studies.  Also, I can only guess that these two groups are many faceted and that gender differences are not the only difference.

It's incredible that these two groups exist - genetically similar populations living in the same region and using the same subsistence techniques, but one is patrilineal and one is matrilineal? It's like an anthropology dream set-up for comparative studies.

What Summers was talking about was biological differences between men and women at the extreme end of the math/physics bell curve, not average ability of the population at whole.  In other words the question is why are there as yet no female Fields medalists rather than average SAT scores or whatever.  This Northern India study neither confirms nor refutes anything about the Summers incident

It's interesting that the error bars on the patrilineal bars are so much bigger than those on the matrilineal. Perhaps it's just a smaller sample size? In reality, the gap may be either negligible or significant on either set of bars; the proportions are actually about the same taking into account error.

The generalization about spatial reasoning has always bothered me; I love spatial reasoning puzzles and my husband can't stand them. But then again, he gives me fashion advice since I'm clueless about style... All that to say, even in a society where men and women generally perform in general ways, it's always dangerous to apply the generality to specific people.

The topic of this post is very interesting. However, sincerely, I do not think that the study on karbi and khasi is really so world-changing, also for methodological problems other commenters have already pointed out.
What I find interesting is the focus on spatial reasoning and gender: As far as I know there are some studies where spatial reasoning was associated to moving around freely as a kid: In many societies, small girls are not encouraged to walk and run around in the neighbourhood - a terrific setting to train your spatial reasoning abilities. Boys are usually much less controlled in their moving around and encouraged to orient themselves alone as soon as possible. This certainly has a big impact on the perception of space (and hence spatial reasoning). I find it puzzling that this idea almost never comes into the mind of researchers of gender differences in spatial reasoning or math.

I'm rather bitter that my 15 year old self concocted a terrible Statistics coursework that apparently could have passed as sociologically noteworthy had I flown to India first.

This reminds me of a BCC Sex ID quiz.  The idea is that, in general, men and women's brains work differently.  Men tend to prefer feminine faces, have longer ring fingers than index fingers, and do better on spatial tests.  There's 6 parts if I'm remembering correctly.  It was 100% sure I was "male" according to how I scored and the tendencies of previously female and male testers. (I'm a female engineer.)  You can still find the quiz here:
http://www.bbc.co.uk/science/humanbody/sex/add_user.shtml

What I find most interesting is that in the matrilineal society, *both* sexes are faster at solving the puzzle than their counterpart. Are there any more studies like this to see if it's not an anomalous result?

In Iran, a highly patriarchal society, more women are in math/science and higher education, than men. The margin is enormous as well, something like 60-40 last I checked.

The problem so worried the (male) authorities, that gender quotas are being implemented in many schools to give the men a fighting chance.

It's been a while since I read this, but a study referred to in the book Delusions of Gender found that when spatial skills tests are prefaced with a statement like "this test is important for home decorating" or some other skill set traditionally viewed as part of the female sphere, women do as well or better than men. It's just another interesting study that lends more weight to the idea that women only do poorly in spatial awareness tests because they are consistently told they are less talented in that area than men.