The Pew Project for Excellence in Journalism reports that coverage of the economy went up in October:

Overall economic coverage accounted for 22% of the newshole from October 3-9, up from 14% the week before (when it was No. 2).

(The word “newshole” refers to the limited space/time devoted to news in a day.)

Coverage of the protests is rising too, suggesting that Occupy Wall Street can take at least part of the credit:

The protests [themselves]… constituted the largest single thread in that coverage, making up about one-third of the economic storyline. That amounted to roughly 7% of the overall newshole, or nearly four times the amount of protest coverage from the week before. 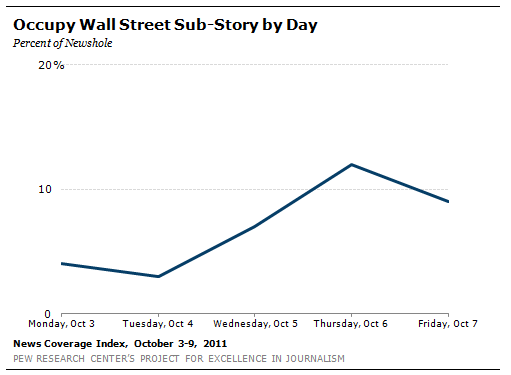 So, is Occupy Wall Street also changing the discourse?

Jeremiah sent a link to data collected by Think Progress that suggests it is.  They counted the number of times MSNBC, CNN, and Fox used the terms “unemployed,”  “unemployment,” and “debt” during the last week in July, before the protests began.  They found that news coverage emphasized the debt (and the need to cut spending to reduce it) much, much more than the fact that there were large numbers of unemployed people (who would be helped by spending). 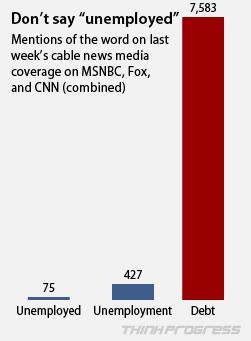 During the week of October 10-16, though, the language was different.  News coverage talked about the protests themselves, and the problem of jobs for the unemployed. The specter of the debt is now taking a back seat to the suffering of individuals. 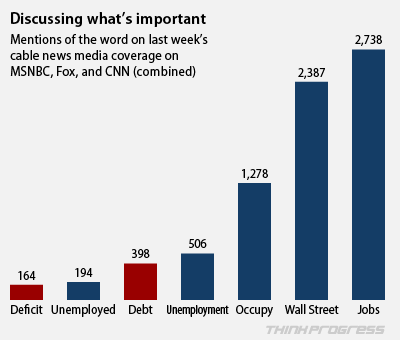 It’ll be interesting to see what happens.

Believe it or not, most of the people concerned about the debt and spending think that their solution will help the unemployed more. At least, in the long run.

Is Occupy Wall Street Changing the Discourse?; Views on the Return of Jesus « Welcome to the Doctor's Office — October 21, 2011

Using the week prior to the Debt Ceiling Bill seems like a way to make skewed argument.  I have no doubt that Occupy Wall Street is changing public discourse (I am a bartender in NYC) but, really?  Does one need to engage in slight of hand to show the truth.

[...] I know that people hate this argument but hear me out. My favourite blog, Sociological Images, addressed this point and I’d like to add one additional thought. Discussions of the debt situation were, based on my [...]