If your survey doesn’t find what you want it to find . . .

Doug Schoen is a pollster who wants the Democrats to distance themselves from the Occupy Wall Street protesters.   (Schoen is Mayor Bloomberg’s pollster.  He has also worked for Bill Clinton.)  In the Wall Street Journal,  he reported on a survey done by a researcher at his firm.  She interviewed 200 of the protesters in Zucotti Park.

What binds a large majority of the protesters together—regardless of age, socioeconomic status or education—is a deep commitment to left-wing policies: opposition to free-market capitalism and support for radical redistribution of wealth, intense regulation of the private sector, and protectionist policies to keep American jobs from going overseas.

I suppose it’s nitpicking to point out that the survey did not ask about SES or education.  Even if it had, breaking the 200 respondents down into these categories would give numbers too small for comparison.

More to the point, that “large majority” opposed to free-market capitalism is 4% — eight of the people interviewed.  Another eight said they wanted “radical redistribution of wealth.”  So at most, 16 people, 8%, mentioned these goals.  (The full results of the survey are available here.)

What would you like to see the Occupy Wall Street movement achieve? {Open Ended}

Schoen’s distortion reminded me of this photo that I took on Saturday (it was our semi-annual Sociology New York Walk, and Zucotti Park was our first stop). 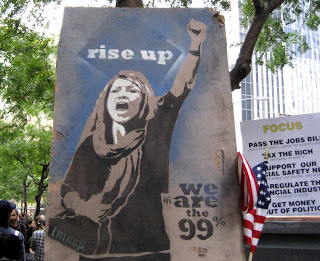 The big poster in the foreground, the one that captures your attention, is radical militance — the waif from the “Les Mis” poster turned revolutionary.  But the specific points on the sign at the right are conventional liberal policies — the policies of the current Administration.

There are other ways to misinterpret survey results.  Here is Schoen in the WSJ:

Sixty-five percent say that government has a moral responsibility to guarantee all citizens access to affordable health care, a college education, and a secure retirement—no matter the cost.

Here is the actual question:

Do you agree or disagree with the following statement: Government has a moral responsibility to guarantee healthcare, college education, and a secure retirement for all.

As evidence for the extreme radicalism of the protestors, Schoen says,

By a large margin (77%-22%), they support raising taxes on the wealthiest Americans,

Schoen doesn’t bother to mention that this isn’t much different from what you’d find outside Zucotti Park.  Recent polls by Pew and Gallup find support for increased taxes on the wealthy ($250,000 or more) at 67%.  (Given the small sample size of the Zucotti poll, 67% may be within the margin of error.)  Gallup also finds the majorities of two-thirds or more think that banks, large corporations, and lobbyists have too much power.

Thus Occupy Wall Street is a group of engaged progressives who are disillusioned with the capitalist system and have a distinct activist orientation. . . . .Half (52%) have participated in a political movement before.

That means that half the protesters were never politically active until Occupy Wall Street inspired them.

Reading Schoen, you get the impression that these are hard-core activists, old hands at political demonstrations, with Phil Ochs on their iPods and a well-thumbed copy of “The Manifesto” in their pockets.  In fact, the protesters were mostly young people with not much political experience who wanted to work within the system (i.e., with the Democratic party) to achieve fairly conventional goals, like keeping the financial industry from driving the economy into a ditch again.

And according to a recent Time survey, more than half of America views them favorably.

Good luck getting the WSJ to print a retraction (let alone a correction or a condemnation). After all, it's in the Opinion section of the paper, and therefore what people actually say isn't as important as what the opinion writer thinks that people really meant by what they actually said. (Or something.)

Would be interesting to compare media portrayals to how the tea party was initially interpreted.

In fact, the Obama victory is proof-positive of the conspiracy that this right wing fringe has warned us about since the 1930s. In this apocalyptic scenario, Obama’s election is part of the Wall Street plot to bring America to its knees, and now it appears that George W. Bush was a critical agent in that plot.

Personally, I'm completely stoked to see more people joining the populist bandwagon. No matter what your solution is, the bailouts showed just how badly our government is entwined with the banking industry. Which is awful for the health of both.

What I find interesting about the media coverage... is that in both cases, those who are on the same side as the protestors try to sell them as having unified, intelligible, and mainstream goals, whereas their opponents focus on how disorganized, radical, and motley the group is.

I hope that OWS can successfully challenge the system.  Not that I agree with their goofy left wing ideology, I don't, but if they could upset the apple cart a little then new opportunities could become available for my own personal agenda.

I think you're incorrect about the "no matter the cost" question.  I just saw the survey results, which Schoen has posted online, and that phrase IS in the question.

What baffles me the most is that he actually represents demands for welfare as "radical" and bad.

When asked the survey question "What would you like to see the Occupy Wall Street movement achieve?"
35% of the respondents stated "Influence the Democratic Party the way the Tea Party has influenced the GOP".
I think that's a plausible survey result, and also an attainable goal. But I would hope that the "Occupy Wall Street" movement raises the consciousness of the electorate as a whole, and not just motivate those voters who are hard core liberals. If the "Occupy" movement's message is simply listened to by the left wing folks, then the MOvement's effort has simply been one of "preaching to the converted".

Schoen goes far past misrepresenting the results of his poll. His methodology is completely whack. He argues that it "represents the first systematic random sample of Occupy Wall Street opinion" when in fact his supposed 'senior researcher' only interviewed a tiny sub-sample, in one geographic location, of the entire Occupy Wall Street movement.

What I want to know is why representative democracy is assumed to equal capitalism.