Re-posted in honor of Love Your Body Day.

In “Yearning for Lightness: Transnational Circuits in the Marketing and Consumption of Skin Lighteners,” Evelyn Nakano Glenn* argues that in many areas of the world, light skin tone is a form of symbolic capital; research indicates that individuals with lighter skin are interpreted as being smarter and more attractive than those with darker skin. Glenn suggests that this symbolic capital is especially important for women:

The relation between skin color and judgments about attractiveness affect women most acutely, since women’s worth is judged heavily on the basis of appearance…men and women may attempt to acquire light-skinned privilege. Sometimes this search takes the form of seeking light-skinned marital partners to raise one’s status and to achieve intergenerational mobility by increasing the likelihood of having light-skinned children. (p. 282)

I thought of Glenn’s article when we received an email from Fatima B. about personals ads in Islamic Horizons, a magazine distributed by the Islamic Society of North America. Fatima says the ads for women often contain references to skin tone, where the women are described as “fair.” 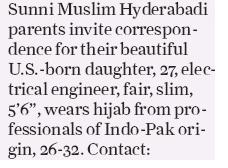 Looking through the past year’s matrimonial ads, I found several others, such as these:

Of course, to the degree the ads emphasized looks, they aren’t particularly different than personals ads anywhere else except that they emphasize skin tone openly. I am sort of fascinated by how often the word “lively” is used in the ads describing women, though. It appeared in a number of different ads in the “seeking husband” section, but I’m not sure exactly what “lively” might be code for (in the language of personals ads, that is, where you try to convey lots of info with very few words).

Anyway, back to our original topic, these ads clearly illustrate the use of skin tone as a form of symbolic capital, which those who have it (particularly women) may highlight to make themselves more attractive on the romantic marketplace, and which others appear to actively value. Further, by allowing ads to include “fair” as both a characteristic the ad placer has, and as a sought-after quality, the editors of the magazine legitimate the open valuing of light-colored skin over other skin tones.

Fatima was pleased to see this practice called out in an ad placed in the most recent issue: 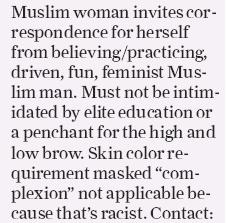 And on that note, have you seen this article yet?

Why does 'lively' have to be code for anything? It has a definition, and it is a positive one, and not terribly strange to see in a personal ad.

As for the main point, I find that it's interesting that this is presented as an issue 'in some part of the world' or only evident in immigrant populations when it appears in North American society. Particularly for women of color in the US (and presumably Canada), but as a society as a whole, not only is lighter skin an ideal, darker skin tends to be TOTALLY ERASED. Nonwhite celebrities are almost always fair skinned, to the point that you would think that black women in particular are the same color as a white woman on a tropical cruise (not only are dark skinned women erased, but even 'bright-skinned' and lighter skinned women are unusual to see) and Hispanic women all look like white women with dark hair and wider hips. Mainstream makeup companies (with the exception of CoverGirl, to an extent) don't make makeup for even tanner-skinned white women, let alone women of color, let alone darker-skinned women of color; in fact, M.A.C. recently came out with a 'limited edition' line of makeup for olive skinned women (targeting in particular Hispanic and Asian women) as if having olive skin is a trend like wearing frosted lipstick or black nail polish. I have no idea if similar studies have been done for women or people of other ethnicities, but black men with lighter skin are shown much more preference in the job market than equally qualified dark-skinned men.

With regards to the comment in the ad that sharing information about complexion is racism, I agree that that is a form of racism that has been termed "colorism". Here's an excerpt from an online article that specifically refers to African Americans but can be extrapolated to refer to other people (including darker complexioned White people)

"LESLIE: ...how would you describe or what is your definition of racism?

LESLIE: What is the relationship if any, between racism and colorism in your view, given this?

MR. HARRISON: I guess the relationship would be that colorism, if you are looking at it as a between-group phenomenon, is a more detailed or specified version of racism. So racism exists, but I think to look at something as being solely racist and therefore assuming that if someone is racist that they hold the exact same views about an entire group of people, particularly about an ethnic minority group that has members whose skin tone vary, I think is incorrect. And so I think colorism gets at how even if someone is racist, they may very well treat members of that one racial group differently based on how their skin tone varies."

I agree with Gwen Sharp that what is interesting about those ads is that the posters explicitly mention a preference for light complexioned mates.

I think that largely as a result of the "Black power"/"Black is beautiful" movements beginning (actually re-invigorated) in the USA in the late 1960s, it has become increasingly socially incorrect for African Americans to be explicit about any colorism that we* might have (inracial colorism among African Americans usually is a preference for light skinned Black people, but for some African Americans it is a preference for brown skinned and darker brown skinned people). And as a result of those movements, it has largely become socially incorrect for other people living in the USA to explicitly refer to a person's skin color. Indeed, some people believe that any mention of skin color is racist. I definitely don't agree with this "color-blind" approach since it's not the skin color itself that is the issue but whether and how that color is assigned a positive or negative value.

It will be interesting to see how long it takes before Muslims in Canada cease being explicit about any color preference that they have, and then how long it will be before that population-and other populations-truly rid themselves of colorism. I suspect we're talking a very long time.

* I wrote "we" because I'm African American. However, I believe that I have worked through the colorism that I was "socialized" to have as a person born in the late 1940s.

[...] She also points out that few women place ads for themselves, except for a few outliers…and this excellent example: From Sociological [...]

Since the ads in this post are from people of Indian origin, I'd like to point out that the obsession with fair skin in the subcontinent is similar to but not quite, racism as understood in the west. The origins go back to the Hindu caste system and it's association of fair skin with a higher caste. (Fair skin might just have been a standard of beauty, like body weight is today.) A clean racial and ethnic divide does not exist based on skin color. Everyone is 'brown' and skin color ranges from very dark to very light.

Muslims who came to India during the medieval times seem to have picked up on the prevailing cultural norms. As many of them were converted from existing Hindu populations, they already subscribed to these norms.

It might interest you to know that fairness creams are very popular in India. http://www.fairandlovely.in/

They aren't necessarily viewed as 'racist' in the subcontinent. Culturally they are more akin to dieting programs and cosmetic surgery.

I've previously read that in Europe fair skin used to be associated with the nobility, because Europeans who laboured in the fields all day used to become tanned by the sun. This sort of distinction between fair and dark might emerge in all societies that used a caste or class system to control labour, or alternatively it might have been carried with European culture on one of its heavily armed 'expeditions' to the rest of the world.

That last ad is awesome.

Very timely article ... you'll find recent coverage of Aishwarya Rai being upset for having had her skin tone substantially lightened for a recent cover of Elle (india). It is true that these lightening creams are big in South Asia where you'll find massive billboards advertising them, they're also available at South Asian grocery stored throughout the world. This conversation about skin color preference in South Asia is interesting...colonialism can be a potential cause, but perhaps it goes further back than British colonialism...would be interesting to learn about!

This is not directly related, because the cultural connection is fairly weak (since, as has been noted, these ads are mostly related to Indian Muslims), but I was reminded, when reading (okay, skimming; it's late!) this, of pre-Islamic poetry - specifically, of a line in the Muallaqa of Imru-alQays (one of the most well-known pre-Islamic poems), where he speaks of his lover as 'the white one of the tents', meaning that her skin is fair since she stays inside all day. So here, again, we have light skin as a symbol of a higher status, someone who can afford to stay at home and not work (another of his descriptions is that she stays in bed until late in the morning). This is of course similar to the European dynamic through a pretty long period (aristocrats highlighting their pale skin since it signified the fact they could afford not to work outside etc.), so maybe not really a very valuable observation, but I wanted to mention it nonetheless.

I know that in places like China, women sometimes will get plastic surgery in order to look more "mixed"--basically, they will make their eyes look a bit larger. It's very popular in order to secure modeling deals, better jobs, better marital prospects, etc. So, in this regard, it has a definite economic dimension.

Hey Natasha:
personal anecdotes are what make up sociological studies.

That having been said -- there's zero new insight here. Calling it something frou-frou like "symbolic capital" doesn't actually de-construct or begin to solve the problem, especially when those of us who live the issue have experienced it as not-so-symbolic capital.

I just viewed this site on Monday April 25, 2011. To end all ends. God created all!. In Genesis God created dark and he then created light. The light is spawned from dark. It does not matter if you are dark or light. All humans cry, bleed, have bowel movements,hurt, get depressed, sick,have to pay bills, must work, and will ( all ) eventually die! The division does not come from God' it comes from man. In the sixties the movies portrayed dark skinned men and women. Today, it is the portrayal of the light skin man and woman. Who cares! If you feel you are better than another because youare light skinned you need to check yourself. Your light skin or even your dark skin is not going to keep you from dying. If God says; you can only get into to heaven if you are light or even dark skin we would all be in trouble. It is man who divides and conquers. Love who you are and the skin that God gave you. Don't worry or allow man to make you feel you are less than. LOVE SELF