Occupy Wall Street: Who are the 1%?

Khimm also shares some charts from Dave Gilson that looks deeper into who these “1 percenters” really are. In this chart, he notes that those in the top one percent have a broad range of professions. You’ll note from the chart than only 14 percent come from the financial sector, and a scant 2 percent are classified as “entrepreneurs.” As a side note, how did any professors make this list (1.8 percent)! 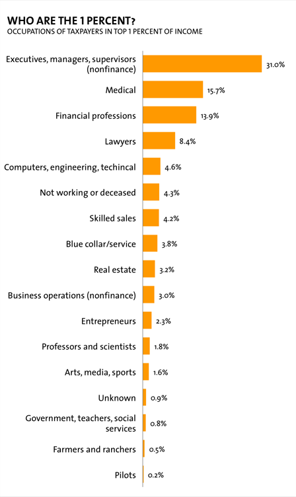 This data doesn’t play into the story the “99 percenters” want to tell about the “top 1 percent.” The preferred narrative is that the top one percent come from the financial sector (e.g. their wealth is not earned in the same way an entrepreneur’s wealth is earned).

But another of Gilson’s charts does help the 99 percenter’s story. According to this chart, the top one percent owns a majority share of the nation’s stock/mutual funds, securities, and business equity) when compared to the “bottom 90 percent.” 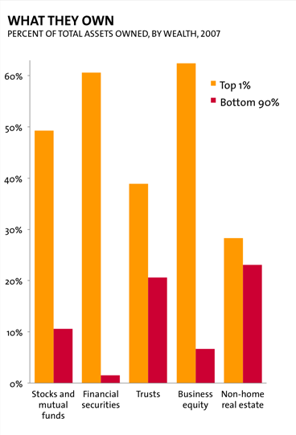 What does this say about the validity of the Occupy Wall street movement? Should they be focusing their efforts on challenging concentrated wealth regardless of whether it is in the financial sector or not? Or is Wall Street the perfect villain?  Does it matter if the story of who constitutes the “top 1 percent” is more muddled if the objective is met? Do the means justify the ends?

Jose Marichal, PhD, is an assistant professor of political science at California Lutheran University. He teaches and writes about: public policy, race and politics, civic engagement, the Internet and politics, and community development.  He is founder of the blog ThickCulture.

My involvement with the Occupy Boston movement so far has lead me to believe the protests are all about "challenging concentrated wealth regardless of whether it is in the financial sector or not".

The narrative (as I understand it) is not that all 1%ers are in finance, but rather that they enjoy privileged access to power, are able to drive the legislative agenda to lower their tax rates and shelter their  assets, while enacting policies that unfairly burden the rest of us (such as our backwards health care system). In addition, this chart doesn't tell us if their income is exclusively from their stated profession: a few professors with high-level administrative positions, or in law and business,  at my institution receive salaries and other kinds of compensation that put them very close to this category, if not in it.

Love Sociological Images, but this post seems like a classic case of an academic misrepresenting a popular position in order to be contrarian about it.  (It's about record wealth disparity, not about the particular occupations of the wealthy, except insofar as the preferential treatment accorded the financial industry in the past few years serves as a powerful example of the preferential treatment accorded all members of the 1 percent.)  Sometimes the herd is right!

I imagine the finance professions are, however, pulling in disproportionately more income in than the rest of the one-percenters.

How much of the top 1%'s income is from inherited or accumulated wealth?
If a couple is in the top 1% of income or wealth, are both of their jobs represented in the chart?
How many of the very rich professors have revolving-door professorships from finance to government to universities?

Some surgical subspecialists and medical administrators (deans, etc) with academic appointments can easily earn salaries of $500,000.00 to $900,000.00 a year. The surgeons could be making twice that amount in private practice. My school's most highly paid professor per the annual Chronicle of Higher Ed IRS form 990 information collection is usually an orthopedic surgeon or thoracic surgeon, though due to the lower cost of living in this area, the salary doesn't quite reach the top 1% level (~450K vs 1% 518K).

(Form 990 requires a list of the top 3 salaried officers of non-profit organizations - not necessarily the president or CEO.)

Wealth is not income.

Just because someone makes a quarter million dollars a year doesn't mean they have accumulated a quarter million dollars in wealth: if they spend all but a few hundred dollars of their income on car leases and rent on penthouses in New York and fancy dinners and salaries on maids and nice vacations--then their net wealth only increments a few hundred dollars a year.

And just because someone who only makes $50k/year (about the average in this country), doesn't mean they can't save more than a few hundred dollars a year, and thus accumulate wealth faster than the fellow in the example above.

I mention this because in all the discussions of the 1%, "wealth" and "income" get used interchangeably. And it's driving me batty.

By taking money from bigger non-local banks, whose money is floating around all over the world, and investing in local smaller banks, you can at least keep your local communities a little safer in that they can police those banks by their own pluralistic and consensus standards. I won't scroll down and look at the wingnut comments that I'm sure there are (ie, rugged individualism is a "right" granted by... whom?, ie, competition is natural and cooperation is un-natural (lol), etc). I'll just assume that reasonable people with big hearts and sharp minds will start taking to the streets -- THINK GLOBALLY, ACT LOCALLY

Re: Professors:  Several professors I had engaged in the following lucrative activities quite frequently:
Publishing Consulting for private and government firms ($$$$$$)Starting businesses based on university projects or researchPatentsI actually got my first job at a company that was started by a couple of professors and then blossomed into a 1000+ firm.

Also note that that line says Profs or Scientists.  I'm sure Big Pharma researchers who get results make a bundle.

The 1% aren't all based on Wall Street, to be sure, but most of their corporations are represented there at the NYSE.

I am afraid many of the Executives in the 31% are in companies with a huge financial arm but not considered as Financial per se.
Nevertheless, Executives, Medical, Lawyers and Financial executives (69% of them all) are in the mind of those in the streets since they all are partly responsible of easy layoffs, expensive health care, expensive lawsuits and the financial collapse. It could have been Wall Street or a hospital or a Lawyer office but since the massive bailouts went to NY, it is normal the protest concentrated there (also logistically is easier)

Business professors sometimes do consulting on the side...(maybe that explains it?)  But anyway -

I've been referring to the "Facts on the Distribution of Earnings, Income and Wealth in the United States: 2007 Update" put out in the Federal Reserve Bank of Minneapolis Quarterly review (because it has nice tables).

The 1% may be different groups, although I'm sure there is some overlap.  So the 1% might actually be more than 1%, but not much more.  It's worth pointing out that higher-income and high-net-worth individuals have a lot of control over when and how they get their money.

For me, the value of "We are the 99%" is that it restates an unpleasant but unavoidable fact.  We don't agree on everything; how could we?  We're the opposite of monolithic because we include almost everyone in this country whether they like to admit it or not.

I think the focus on the financial sector (more than 18% of the top 0.1%, according to the source of the chart above) is easy to trace:  the industry is not only non-contributory, but it's actively destructive.  Combined with the self-righteous moral superiority they exhibit, it's just infuriating and intolerable.  Doctors and lawyers and TV executives at least DO something.  The financial industry would apparently bleed us all to death if they have their way.

I swear, at least the French aristocracy was smart enough to claim their wealth and privilege came from divine right.  They didn't claim to have "earned" it.

What's the age distribution of the top 1%?

This data is problematic to begin with. When you get to a certain level of wealth it's often not your stated occupation that brings in most of your income.

"Executives, managers, supervisors" is a term so broad and vague as to mean nothing at all. It would include someone who's worked hard in the same industry all their life and has a lot of technical expertise. It would also include an ex politician rewarded for voting for legislation helping --say -- Enron during his/her term in office with a position that involves a nice salary and no actual work. It would also include person who is a member of a dozen boards, each of which pays them a stipend equal to a working person's yearly wage just to show up twice a year and vote as they know they are expected to.

Then there are people who live entirely off inherited wealth and, when asked what they do for a living, say they have "a photography business" or something similarly vague. I saw a lovely example the other day on a Spanish tv program that gets people to let the show inside their very large or unusual homes. The owners, when asked what they did for a living, said "We're sailors". That turned out to mean they owned a full-sized replica of an eighteenth-century sailing ship, which they took out to sea in summer.

Dr Marichal's suggestion that this data somehow impugns the statements of the Occupy Wall Street movement is either dishonest or hopelessly ignorant.

Lets take their money and spend it.

I would say that Wall Street is the epitomy of the fact that it takes money to make money. We've all heard stories of people who have made it big trading stocks (I used to know a guy who retired quite young that way), and there are people who make good livings that way, but you need to have money before you can get into the market. There no scholarships or waivers or anything else to help those who are less well off. The more disposable income you have, the more opportunities Wall Street offers you, point blank.

I marched at Occupy Wall St. last week. I don't believe that the demonstrators blame those who work on Wall St. solely, but rather the corporate culture that emanates from Wall St. Multinational corporations strive to push their stock prices up, regardless of the harm that comes to our people and our planet. The corporate money that has purchased our elected officials was made on Wall St. I can't think of a better place to protest.

I guess I would be considered a "right-winger"... But I think there is a lot in common between the Tea Party and the OWS people. The people in power want both sides to be fighting, so they can keep their power. If we could all get together and fight the beauracracy we could do wonders.
As for the professors, if you go to the 99% website, it appears most people there are complaining about the high cost of schooling, or student loans. Maybe they should be occupying the universities...

Note the conflation between "Professors and scientists" and the use of income rather than wealth. Income will never give you a picture of inequality because of the way it is defined. You can be a billionaire and have no income because "income" does not count value of bank accounts, stock/bond/portfolio/interest/capital gains. Thank the Census for that neat sidestep. You might want to re-think skepticism about Occupy's claims and pay careful attention to the data used.

[...] is a table, taken from this website, http://thesocietypages.org/socimages/2011/10/12/occupy-wall-street-who-are-the-1/ , which shows that those in the top one percent have a broad range of professions. You’ll note [...]