Gender Non-Conformity in a Tide Ad 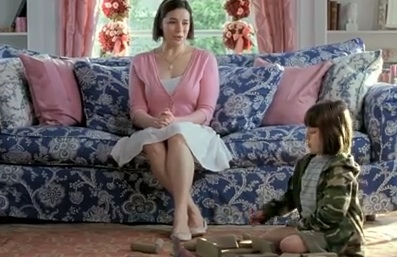 A recent Tide commercial featuring gender non-conformity by a girl has really struck a chord, judging by the ten submissions we got of it. In the ad, a mother wearing a pink sweater, sitting in a room accented in pink, nervously bemoans the fact that her daughter, who is wearing a camouflage hoodie and playing with wooden blocks, doesn’t like the trappings of femininity — specifically, she doesn’t like pink and she does like cargo shorts:

The commercial clearly illustrates the emphasis on gender conformity and the way parents may feel discomfort if their child won’t conform. The mother is clearly distressed that the “pink thing” didn’t work with her daughter, and we’re to assume that she worked hard to try to convince her to act more traditionally feminine but has slowly given up in the face of her daughter’s disinterest. The little girl eschews femininity at the cost of disappointing her mom. As someone who absolutely hated dresses as a kid myself, I remember that feeling that hopeful look on my mom’s face when she’d hold up a dress, hoping that somehow this one would win me over, and the knowledge I was somehow hurting her by rejecting it.

Yet as several of the submitters point out, the commercial also undermines this emphasis on gender conformity, even while presenting having an unfeminine girl as an exasperating situation for a mom. Unlike some ads we’ve seen that present the product as helping you raise a child who meets gender norms, here, the product does just the opposite: it saves the little girl’s clothes, which the mother kind of wishes had been ruined. In the end, the mother, though clearly less than thrilled, praises her daughter’s parking garage. As Melissa M. says,

On one hand, we see a child neither conforming nor being forced to conform to styles attributed to their gender role, though on the other hand we see a mother obsessively sticking to her role and being painted in the light of a harrowed mother, desperately trying to help her child fit in.

Transcript after the jump, thanks to Ulysses.

Well, we tried the whole ‘pink thing’. Nope. All she wants to wear is hoodies, hoodies and cargo shorts, gettin’ dirty. Then she left some crayons in her pockets and they went through the wash: I thought all her clothes were ruined. Enter Tide, Tide Booster. The stains are gone, so… it’s kinda too bad. Another car garage, honey? It’s beautiful.

I do like that the commercial shows that sometimes people just are who they are, even when you try to change them. I don't like the underlying assumption that this mother is being judged on the outcome--because I wonder if the mother's anxiety is more about other people thinking she is a bad mom than helping her daughter fit in. Or at least, it is both--she may want her daughter to fit in, but that is at least partly to avoid judgment on her parenting skills, I think. Of course, I was also a dress hater with a mom who loved them, and some of the problems were just that she wanted to enjoy those feminine things with me, and I just didn't, and she was disappointed that we couldn't do it together, so there is probably a bit of that in there, too. My mother was often perplexed by the things I liked (and still is, even though I am 41 now...).

I have issues with the people jumping all over the ad as being "anti-trans". They've labelled that child as a trans character - which is absurd as she is a CHILD and not yet of a sexual mind. Also it's a 30 second commercial, not her life story. I think the mother comes off looking the worst in this scenario (overbearing, strict gender conformist, etc)

When I saw the headline I was hoping it would be for the Tide ad in which the man and woman are folding their triplets’ clothes together while discussing detergent. I was so excited when I first saw it – A couple SHARING a household chore?  Usually in commercials Dad is too stupid and helpless to wash his own hands, but Mom is just happy-as-can-be cleaning up everyone else's mess.  "Finally," I thought, "A tiny first step."

Then, just the conversation about laundry detergent ends and commercial fades out, Mom informs Dad, “You really suck at folding.”

I think it's funny you say you hated wearing dresses as a kid....
I LIKED wearing dresses, but felt pressure to never ever wear them to school, since anyone wearing a dress was roundly teased....even on picture day.

This made school clothes shopping very difficult, as I would buy a few dresses and never wear them.

When I started homeschooling at 13, I spent a year of my life wearing nothing but dresses. Everywhere.

Also, I thought this ad would be about a guy doing the laundry for once. But no.

I have to admit that even though my husband does his own laundry, I buy the laundry detergent...and I always buy the cheapest freaking thing at the store...I don't care a bit about which detergent it is. :)

This is a refreshingly non-judgemental look at parenting.  Part of the challenge of raising children is navigating personality differences.  My child is not a mini-me, but has his own interests that need support.  I am not a parent-bot, and will still have my own personal preferences for where I want to guide him in life.  In this ad, the mother is neither denying her own feelings nor pressing the child into becoming someone she isn't.

I wish that little girl was my child. As my own daughter gets older and decides she likes non "girly" things im perfectly okay with it. I cant stand parents who make little girls wear pink because its a "girl color" or little boys wear blue because its a "boy color" I do not recall being teached in school that colors have genders . Its truly sad that kids are still picked on for the colors they like to wear, ex a boy wearing pink, he gets called a girl or gay . What the hell are you teaching your children?!

Gender non-conformity among children is an interesting topic for me.  Last year, one of my students tried raising this (along with transgender identities) when we were talking about gender socialization.  Any tips on or readings on how our discipline is thinking through these things with an eye to our view of childhood socialization?

In the 70s I was a tomboy, perfectly acceptable- if tease-able at school. I had great parents in this regard (liberal, feminist, open, intelligent), they never made an issue of it, with the rare dress wearing for special events was explained in a way my brain would understand. In many photos I could easily pass for the younger brother to my feminine, older sister. It was never an issue.
I shudder to think, going by some comments, that I would have been labeled trans were I a child today. I was a tomboy. More importantly I was a child - free to be me.

@holizz Classy on the butch comment. I started getting that at age 8. Do strong, intelligent, opinionated, unafraid women who would have trounced you in the playground always illicit such an immature response from you?

You know what? It's actually ok to show a parent worried about that. Because parents do worry if their kids fit in, even if this is an extreme way of showing it. And it shows that you can worry and things still can be ok. We don't have to eat ourselves up with guilt about being the perfect mom, because things won't always go our way, and it's ok, and it's kind of amusing too about how no matter how we push our agendas, our kids will still be individual personalities. And everyone swears up and down that they KNOW that, they are a PERFECT parent in every way and totally in tune with the way to raise their kid. This mask is causing parents to really suffer, and it isn't fair.  I did the same with my kid, by the way. I tried to make her gender neutral, push neutral or boy like stuff on her, and she went the other way. She turned into the mom. Go figure.

Who the f cares!! It's a friggin soap commercial .. Get a life!!

I don't know the technicalities of it but that advertisement makes me feel really sad.

[...] the opposite: it saves the little girl’s clothes, which the mother kind of wishes had been ruined.Full write-up here. Video to commercial here. Posted by: Phire on October 7, 2011 | Tags: advertising, gender, [...]

I find it interesting that nobody yet has pointed out Tide's current slogan: "Style is an option. Clean is not." The previous generation of ads, if I remember correctly, have been used to emphasize the weirdness of particular sartorial choices at the same time that it tries to... I don't know, manoeuvre Tide into the position of tolerance? 'I don't care what kind of shirt it is, I'll get it clean"? Either way, the previous uses of the slogan give me the impression that the mother is supposed to consider her daughter's fashion sense to be weird or abnormal.

I recently saw another Tide ad in which the opening line was "I'm a stay-at-home-dad."  Tide is obviously doing this with intent, and I think it's fantastic.  I hope it continues.

I am interested in this new emerging trend in advertising.  I feel  there is a satirical approach to gender roles in current advertising campaigns.  If anyone has insight, link to scholarly research on the subject or knows where I can find more information concerning this topic please let me know.

[…] Gender Non-Conformity in a Tide Ad This ad depicts a mom who is exasperated at her daughter’s non-conformity with gender roles. While the mom tries to be supportive of her daughter’s non-traditional efforts, her obvious discomfort illustrate that gendered expectations for behavior still run strong. […]