A blogger named Aluation posted this graphic showing how the New York Times changed the first line of a story about the Occupy Wall Street demonstrations.  The change subtly shifted the blame for the mass arrest on the Brooklyn Bridge from the police to the protesters.  In the first version of the story, police allowed them onto the bridge and then “cut off and arrested” them.  In the second, there was a “showdown” in which demonstrators “marched onto the bridge.”

Adding interest, the author of the piece was changed from “Colin Moynihan” to “Al Baker and Colin Moynihan.”  Who is Al Baker?  He is the guy in charge of the police bureau at the Times. 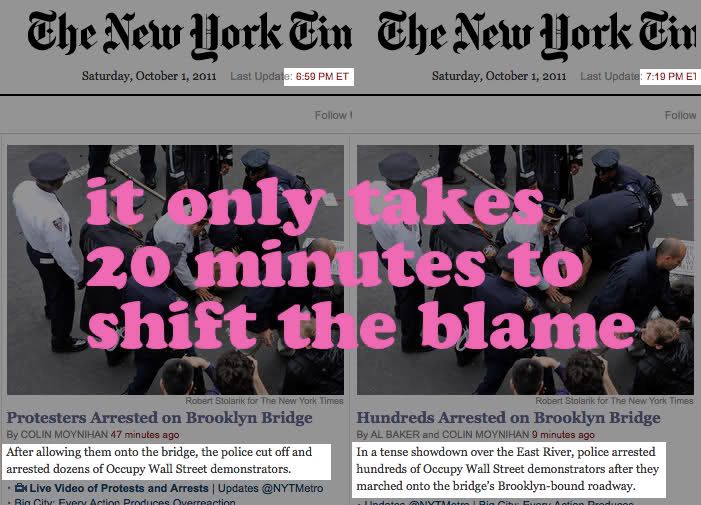 This is a great example of how important language is in framing events.  The difference isn’t dramatic, but a close look at the wording reveals a clear difference.

It’s also a great example of the power of certain individuals and institutions to shape how the rest of us understand reality.  We should be especially suspicious of the change in the authorship of the story.  When reporters have “beats,” they have to maintain good relationships with important sources on those beats. They rely on the same sources, over and over, to provide inside scoops.  If they alienate important sources, they have a much more difficult time doing their job.

What I’m trying to say is… there is good sociological theory, based on strong evidence, to suggest that an important person in the New York police department saw this story, called Baker, and told him to change the wording.  In which case, Baker might have done so to avoid alienating a source on which his job depends.  I’m not saying that’s what happened, I’m just saying that these kinds of things do happen.

Thanks to Jay Livingston for the tip.

For another example of framing, see the captions on a slideshow covering survivors of Hurricane Katrina.

Yes.  It should be noted that non-mainstream press and interviews with those who were there all seem to point to the first version as being accurate.

Anyone who has been following the news coverage of the Tea Party protests is not surprised.

The interesting question, to me, is to what degree it is an organized effort, versus the natural containment caused by societal structure and the views of the people working at the papers. Is there someone in a boardroom actively shaping this, or is it more organic, based on what the authors feel are the reasonable bounds of the public debate?

I agree that those two versions of the same story demonstrate "the power of certain individuals and institutions to shape how the rest of us understand reality."

But while we are talking about language in regards to the Occupy Wall Street movement, it should be noted that the very use of the word "occupy" is very off-putting to some People of Color.  The racialicious blog has published a number of ground reports & opinion posts from People Of Color about "Occupy Wall Street". For example, http://www.racialicious.com/2011/10/04/more-notes-and-voices-from-occupywallstreet/#disqus_thread includes this quote from Meagan La Mala on the colonization of Puerto Rico and framing movements:

"What I didn’t see or hear was a self-challenge among the participants regarding the language they chose to use. “Occupation” does not sit well with me. As a woman whose country has been occupied by the United States for hundreds of years hearing white men hand out fliers, inviting people to “celebrate the occupation” made me cringe. In a conversation I has with a friend and her friend, I asked if they had heard any discussion of the language used in any of the general assemblies or anywhere really. It was clear that to some (many?) there is no sense of why using the language of occupation is a problem, how it could alienate the very people who are most impacted by the corporate/government policies.

“I saw a sign that said “occupy Wall Street not Palestine,” I was told, as if that was enough. It didn’t feel that way."

And this racialicious article http://www.racialicious.com/2011/09/30/occupy-wall-street-the-game-of-colonialism-and-further-nationalism-to-be-decolonized-from-the-left/ by Jessica Yee; September 30, 2011 has had 110 Comments to date.  Here's the beginning quote from that post:

"The “OCCUPY WALL STREET” slogan has gone viral and international now.  From the protests on the streets of WALL STREET in the name of “ending capitalism” – organizers, protestors, and activists have been encouraged to “occupy” different places that symbolize greed and power.  There’s just one problem: THE UNITED STATES IS ALREADY BEING OCCUPIED. THIS IS INDIGENOUS LAND. And it’s been occupied for quite some time now."

While I agree with those who beiieve that the word "occupy" carries quite negative colonialistic connotations, I fear that the Occupy Wall Street movement has now gained such momentum that it may be too late to change its name. Besides, I believe that there are other issues with the Occupy Wall Street movement (as articulated in those racialicious posts) that are much more problematic than the movement's name.

Also, from a historical perspective, African Americans have also “occupied”
Wall Street since the 17th century. The African Burial Ground National Monument in Lower Manhattan (New York City), dedicated in 2007, preserves a site containing the
remains of more than 400 Africans buried during the 17th and 18th centuries.
Historians estimate there may have been 15,000-20,000 burials there. The site
has been designated a National Historic Landmark and National Monument.

My post on the African Burial Ground Monument including videos can be found at http://pancocojams.blogspot.com/2011/10/african-burial-ground-national-monument.html

Who is Al Baker?

Very important points raised by all.  But in the interest of full disclosure, it must be said that sociologists are most certainly not immune to tough moral decision surrounding gatekeepers, access, and authorship.  I doubt, however, that a rudimentary knowledge of discursive power is part of a journalist's theoretical toolbox.  :P

[...] New York Times Shifts Its Framing of the Arrests at Occupy Wall Street — Your Liberal Media, supporting the conservative narrative as usual. [...]

The injustice of this makes me so damn angry!  We should be able to just run over hippies who block traffic.

20 minutes is also enough time for the story itself to change... If you look at the text, the wording changes from "dozens" of arrests to "hundreds" of arrests. Presumably, during that same 20 minutes, many more things happened. I'm a journalist. I can tell you that when I'm dealing with the memory of a full 20 minutes of developments, and I go into edit something, I'm going to write the piece differently. You can even see the attempt to cram more information into the sentence in the increase in its length.

[...] we were talking about in class about the Occupy Wall Street Demonstrators. Here is the link: http://thesocietypages.org/socimages/2011/10/04/new-york-times-shifts-its-framing-of-the-arrests-at-... (I also posted it under my links [...]

BUT I did not recieve the answer to the BIG QUESTION yet... ! Whereas I do not know exactly whether or not your statement about "most" is true or not. The only thing I know is that our country (IRAN) was FUCKED 30years ago by the same slogans and hopes like "justice". We have to understand that people are NOT equal! And there is also deffernce between "JUSTICE" AND "EQUALITY". Justice is when my father works harder he and his family be benefited MORE and not the SAME (EQUAL) as our wide-ass neghbour. And this would be JUSTICE... .

This was a very interesting article. The headlines are also quite interesting too. In the report on the left (the first report), the headline labels the arrested group as 'protesters'. Whatever else this is doing it does at least suggest that they might have been driven by some kind of (possibly worthy) political cause. In the subsequent report, however, all we get is a reference to 'hundreds arrested'. Here, there's no political cause indicated as a causal factor in their arrest. And without this reference to a political cause, it seems to me that the 'arrested group' can more easily be read, by us, as similar to a very different kind of group who tend to get arrested: 'criminals'. The fact that there are 'hundreds' of them also subtly hints at the idea that these 'criminals' might, perhaps, have been 'rioting' rather than protesting.

BUT I did not recieve the answer to the BIG QUESTION yet... ! Whereas I do not know exactly whether or not your statement about "most" is true or not. The only thing I know is that our country (IRAN) was FUCKED 30years ago by the same slogans and hopes like "justice". We have to understand that people are NOT equal! And there is also deffernce between "JUSTICE" AND "EQUALITY". Justice is when my father works harder he and his family be benefited MORE and not the SAME (EQUAL) as our wide-ass neghbour. And this would be JUSTICE... .

Situations like this happen every day.  Like John Mayer once said, "When they own the information, they can bend it all they want".

Well, I DID NOT have enough time to talk to MOST OF the people there or check MOST OF press... . I congratulate you if you had that much time!!! Whereas, I DID NOT get my answer to the BIG QUESTION I asked in the last comment! I am still waiting for someone to answer... !!! Meanwhile, I think we have to understand that there is BIG differece between "EQUALITY" AND "JUSTICE"! We also have to accept this fact that  PEOPLE ARE NOT EQUAL! And that, they ARE NOT the same! They are different in many many ways... . So, if, for example, a man works harder or do better than the other one (due to his intellegence or body power or sharpness or other virables) JUSTICE is when that guy gets on top... . The second guy has to work harder and harder to take over him... . Your statement is like: "Why should only one team be on top in Olampic?! This is not justice!!! Every team has to be on top!!!" Don't forget something my brother! : You are reading this comment because "one day" "one sperm" worked harder (did better) than other sperms to get to the goul... ! This is the law of the nature! Of course others should not be delleted (like the other sperms)... . They are supported by insurance companies and other governmental institutes. And at last I remind you of what has happened years ago in this wourld! I know many countries that are almost FUCKED by the Soucialist - Commonist bullshit ideas, such as Iran. Don't try to have the same experience... !!! By the way, I am an Iranian!!! !!! !!! Good luck!

Remember! There is defference between EQUALITY AND JUSTICE! Justice is when the better you are (IN ANYWAY) the better position you get... ! That's it!

[…] New York Times Shifts its Framing of the Arrests at Occupy Wall Street | Sociological Images “This is a great example of how important language is in framing events… . It’s also a great example of the power of certain individuals and institutions to shape how the rest of us understand reality”. […]