Are Both Political Parties Science Skeptics?

Do Democrats and Republicans have a similar lack of respect for science?  Alex Berezow seems to think so.  The title of his op-ed in USA Today is “GOP might be anti-science, but so are Democrats.”

I hope that others will point out the false equivalence.  For evidence of  Democrats’ anti-science, Berezow cites mostly fringe groups like PETA, which objects to scientific research on animals, and fringe issues like vaccination.  According to Berezow, many people who oppose vaccination are Democrats.  True perhaps, but these positions are held by only a small minority of Democratic voters.  And neither of these positions has been espoused by any of the party leaders.*

Compare that to Republican anti-science.  Most of the leading GOP presidential hopefuls, now and in the previous election, have voiced their skepticism on evolution and global warming.  Only Huntsman and Romney have hinted that they agree with the near–unanimous opinions of scientists in these fields.

Maybe the candidates take these anti-science positions because the people whose votes they want – the GOP faithful – also reject the scientific consensus.

Here are the results of a recent Gallup poll that asked which position  “Comes closest to your views.” 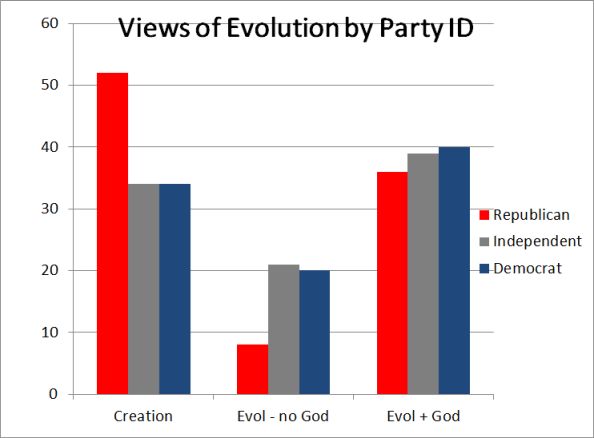 Half of all Republicans think that humans have been around for only 10,000 years.

The Republican base is also much more dubious about global warming than are Democrats. 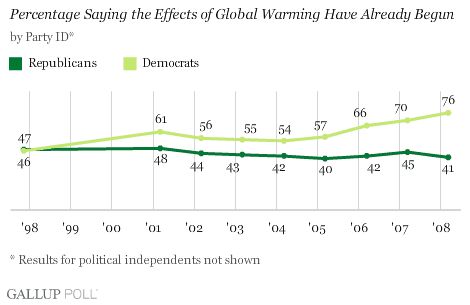 The graph goes only to 2008, and beliefs about global warming since then Americans’ have become somewhat more skeptical about the issue, but I am certain that Republicans are still well above Democrats on the chart.

As for the anti-vaccine crowd, Berezow sees them as mostly Prius-driving, organic-vegan liberals.    Maybe so.  I have a scientist friend whose son runs an organic food co-op, and she is furious at his decision not to have his kids (her grandchildren) vaccinated.  (FWIW, she drives a Prius.)  But is there more systematic evidence of this liberal/anti-vaccine connection?  Here’s Berezow’s proof.

…a public health official once noted that rates of vaccine non-compliance tend to be higher in places where Whole Foods is popular — and 89% of Whole Foods stores are located in counties that favored Barack Obama in 2008… With the exception of Alaska, the states with the highest rates of vaccine refusal for kindergarteners are Washington, Vermont and Oregon — three of the most progressive states in the country.

Areas with Whole Foods have both more vaccine skeptics and more Obama voters.  The thread of the logic is a bit thin (how big a difference is “tends to be higher”?), and it runs the risk of the ecological fallacy.  But it sounded right to me – my friend’s son lives in Vermont – and 75% (three states out of four) is pretty impressive evidence.

But there are 46 other states plus DC, and I wondered if they too followed the pattern.   So I looked up the CDC data on the  percentages of vaccination refusal for non-medical reasons in each state (here).  I also got data on how Democratic the state was – the margin of victory or loss for Obama in 2008.** 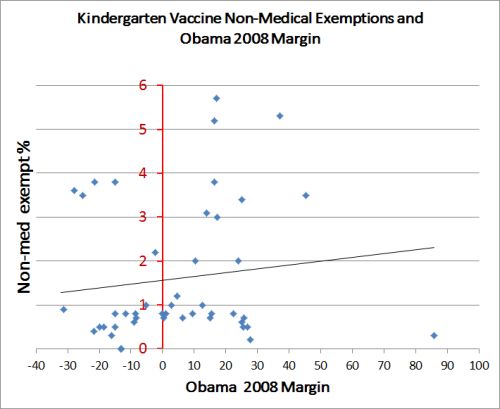 Sure enough, the top three — Washington, Vermont, and Oregon — are all on the Obama side of the line, though it’s worth noting that in Washington, vaccine exemption was as common in the conservative eastern part of the state (near Idaho, which also has a high exemption rate and was strongly for McCain) as it was in the more liberal western counties.   And of the states with 3% or more taking non-medical exemptions from vaccination, eight were for Obama, four for McCain. But overall, the correlation (r = 0.12) is not overwhelming.   And even in the most anti-vaccine, pro-Whole Foods states like Washington and Vermont, nearly 95% of parent s had their kindergartners vaccinated.  That’s hardly convincing evidence that Democrats are anti-science.   Compare that with the 50% of Republicans (and 75% of their presidential hopefuls) who think evolution is a hoax or at best “just a theory.”

*Berezow notes that seven Democratic senators (and one Republican) wrote a letter to the FDA “threatening to halt approval of a genetically modified salmon.”  But he implies that their position had more to do with money than anti-science.  They were from the salmony Northwest, while the company seeking approval is in Massachusetts.

** The CDC had no data for Arizona, Colorado, New Hampshire, Minnesota, and Wyoming.

Honestly, the whole organic food movement would be a better example of liberals rejecting science than the ones he gave. Or the opposition to nuclear power. Or, conservatives at least would argue, gun control.

Still, I agree it's a false equivalency currently. Biology has challenged many long-standing conservative values, and it's leading to a larger distrust of science in general. Moreover, it feeds into the general anti-authority, anti-ivory-tower-expert classism in the conservative movement.

There was some inter-sociologist Twitter conversation about this topic a few weeks ago.  Based on that conversation, I think it might be useful to examine the relationships between anti-intellectual, anti-science, and anti-establishment thinking - and to what extent these can be teased apart.  Anti-vaccination on the left is fringe, yes, and perhaps not exactly anti-science (or anti-intellectual), more anti-establishment.  Among those relative few who believe it it is probably most often because an expert (often a medical expert) they trust tells them the science is wrong, for example, because biomedical companies are getting money from vaccines.  Only in those cases where it is influenced by New Age sorts of beliefs does it look more like the conservative situation, where the "experts" saying the (biological or geological) science is wrong are usually not scientists but theologians or economists.  And this is where a more clearly anti-intellectual, anti-science perspective seems to be in play.  But whereas New Age belief is a minority among liberals, beliefs supporting this perspective are the majority among conservatives.

Vermont doesn't have any Whole Foods stores.  Zero.  Not sure that qualifies as being one of the "most....pro-Whole Foods states".

Wait. Over half of the polled Republicans believe humans have existed for less than ten millenia, yes, but so do a THIRD of independents and Democrats? Is this as staggering to anybody else as it is to me?

Still, the rejection of evolution isn't as troubling to me as the rejection of human impact on the climate or universal vaccination, both of which lead to highly irresponsible personal actions. (I'd argue that not vaccinating your kids is worse, at least in terms of short-term impact on global human health, than denying that your fossil fuel consumption is unsustainable.)

I think it's probably unreasonable to toss all these various forms of opposition to science and technology into the same basket and call them all "science skepticism."  They all have very different foundational philosophies and are symptoms of different social issues.

Medical skepticism is in a lot of ways about fear of medical authority, and in some cases is encouraged by the very real abuses that the medical community has committed in the not-so-distant past.  This is, IMO, especially the case in communities and countries that have more experience as testing grounds for medical research rather than the final beneficiaries of that research (e.g. HIV research in Africa, etc).  Medical skepticism in most cases isn't really a left-right issue except when it comes to very specific issues, such as the HPV vaccine, which is a debate more about tolerable expressions of sexuality than it is about vaccination.

Radical environmentalist opposition to biotechnology, animal research, and certain forms of natural resource exploitation strike me as something significantly different from science skepticism, and I don't think it really makes sense to classify them as such.

More of this "both sides" crap

[...] Are Both Political Parties Science Skeptics? — Sociological Images addresses this false equivalency. Topics such as evolution and climate change are subject to overwhelming scientific consensus. These aren’t “reasonable people can disagree” topics like tax rates or foreign policy. These are “the wilfully ignorant being exploited for political gain” topics. [...]

I think there's a distinction to be made between opposition to the practice of science versus refusal to accept the truth of scientific results. PETA, for example, doesn't think that animal studies produce false data or that medicines developed through animal testing don't work* -- they think that the experimentation procedure that produces those results is an immoral one to carry out. So the parallel on the right would be opposition to stem cell research, which is similarly a claim about the morality of the procedure rather than disagreement with the results.

*Opponents of animal testing do sometimes make claims of this nature, but in the context of the larger discourse it's clearly a secondary concern.

[...] ARE BOTH POLITICAL PARTIES SCIENCE SKEPTICS? by Jay Livingston, [...]

This is truly not intended as a snark, but as someone who works in mental health with children and families, I tend to see most anti-vaccine sentiment AND most conservative politics in people who have a lot of paranoia (not necessarily fully meeting the clinical criteria, but the people who think their lives are worse off because of the gays, the liberals, the unions, etc. etc.)

Also, having lived and worked with families in Washington (state) and Massachusetts, I can tell you that part of the high levels of non-vaccination in Washington is that the state allows families to state "personal reasons" to not be vaccinated, where many states require it to be a religious reason (case law of course states that religion need not be an organized religion, but many people don't know this and assume they'd have to join a religion that doesn't vaccinate). Also, more people in Washington, at least in my experience, seem aware that people can opt out of vaccination, and generally more aware of people who are culturally different from them. People I've dealt with in Massachusetts have tended to have this do-gooder sort of sentiment that I usually appreciate, but which has been incorrect around this issue when stating "nope, you can't come to school without it or people would get sick!" despite the Department of Public Health website stating that there are in fact exemptions.

Did you weight your analysis by population? Seems like doing an analysis without considering that is somewhat fallacious.

Best of 2011: Changes in Politics, Best and Worst Run States, Understanding the OWS, and More « Welcome to the Doctor's Office — December 29, 2011

[...] ARE BOTH POLITICAL PARTIES SCIENCE SKEPTICS? by Jay Livingston, [...]