SNL and the Double Bind for Women in Politics 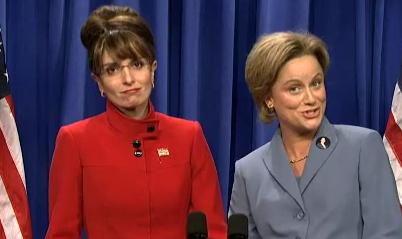 While America has taken great steps in recent decades toward gender equality, this progress seems lacking in politics. No elected legislative body in the U.S. has ever come close to being half female—the proportion we would expect if it were truly representative of the populace. R.W. Connell argues patriarchy is replicated and reinforced partially through our individual gender practices that cumulatively make social institutions operate.  In daily life, all men and women are socially pressured to embody the gender traits prescribed for their sex.

Kathleen Hall Jameson argues the ways we judge others’ masculine and feminine selves creates a double bind dilemma for women in leadership; a problem that is especially salient in politics, where winning is contingent upon candidates being both personally liked and thought of as competent leaders.  Men have no problem being respected both personally and as leaders because acting strong, confident, and in-charge is expected of both males and authority figures.  However, when women present themselves as leaders by acting dominant, they are likely to be judged as overly harsh, or even “bitchy.”  Yet when women act feminine, they are often judged as unfit for authority because they lack leadership qualities.  In electoral politics, it is very difficult for women to walk the tightrope between being a competent leader and also connecting with voters personally.

We can see the double-bind at work in Saturday Night Live’s now famous, or infamous, parodies of Hillary Clinton and Sarah Palin during the 2008 Presidential campaigns.  Tina Fey’s Grammy-winning depiction of Sarah Palin exaggerates femininity, often portraying the former Alaska governor as if she is competing in a beauty pageant.  Amy Poehler’s masculine portrayal of Hillary Clinton as overly-aggressive, combative, and filled with anger exemplifies the other side of the double bind dilemma.  One skit bringing these characters together to speak out against sexism in the campaign is especially revealing:

Fey presents Palin as accommodating, saying “I was so excited when I was told Senator Clinton and I would be addressing you tonight,” to which Poehler-as-Clinton uncooperatively says, “I was told I would be addressing you alone.” Similarly, a capitulating Palin says “Hillary and I don’t agree on everything,” to which Clinton combats “we don’t agree on anything.” Later in the skit, Poehler-as-Clinton takes firm policy stances while Fey-as-Palin gives ‘pageant’ answers. After Clinton speaks out against the Bush Doctrine, Fey as Palin claims “I don’t know what that is.” Clinton says “I believe diplomacy should be the cornerstone of any foreign policy;” Palin responds “and I can see Russia from my house.” In the SNL skit, Palin tells political pundits to quit using words “that diminish us like pretty, attractive, beautiful …” while Clinton interrupts, “harpy, shrew, boner-shrinker.” Throughout the skit Clinton becomes increasingly agitated and then rips apart the podium in anger. Poehler’s masculine portrayal becomes literal when she says “I invite the media to grow a pair, and if you can’t, I will lend you mine.”

The overly-effeminate portrayal of Palin reflects one side of the double-bind where many people judge feminine women as lacking the appropriate characteristics for leadership. On the other side of the double-bind, the unfeminine portrayal of Clinton illustrates how women who act powerful and confident are subject to character attacks. However, because leadership qualities are expected of men, male politicians are not subject to this critique when they act like leaders. For example, Poehler as Clinton describes her “road to the White House” as “I scratched, and I clawed,”—words with negative connotations which would never be used to describe competitive men with ambition.

While political comedy depicting our leaders as inept has been a mainstay of our electoral process since our country’s founding; we should be cognizant that parodies of female politicians often draw upon very real aspects of gender that make it difficult for women to achieve positions of leadership.

I believe Fey portray's Palin as uber-feminine primarily since Palin in real life acts that out.  Fey uses "pageant" answers because Palin does.  Palin, after all, was a pageant queen.  Although tweeked to enhance the humor, Fey's performance of Palin is apt, accurate, and successful because of it's scary realness.  Poehler certainly took great liberties with Clinton, but I would not say the portrayal was double bind, but moreso a comedic look at how the rest of society fails to recognize an obviously well qualified candidate with great leadership skills.  Further, I reject the idea that is posed here, that any woman (or any man) is qualified to be president simply because of their sex.  Because Palin was made fun of frequently does not necessarily mean she was unfairly evaluated.  In truth, I think she was made fun of so frequently because she is a dolt, imbecile, and panderer that deserves all the negative attention she so very craves.  The contrast is clear; Palin was/is not qualified and it is laughable that people even consider her so.  Clinton was/is certainly qualified and takes the matter seriously.

The only problem I have with the post is the labeling of idiotic answers as "pageant answers" and "being feminine".

Palin is not fit for office because she's stupid, not feminine.

Perhaps the difficulty is that there just isn't an intelligent, qualified, and overtly feminine candidate that can be compared with Hilliary.  A fair comparison would hold intelligence and qualifications constant while only looking at femininity.

I don't get it: since when did wearing a pant suit and speaking articulately make you masculine? I must have missed that step back into the Edwardian Era. Hilary is very femminine, she wears make-up, her hair is perfectly groomed and colored, her nails manicured, her clothing immaculate, always the markers for femminity when I grew up. Hold on a second..I could say that nowadays about the guys though...so why aren't they called feminine??
As for Fey. Well her fey statements on her apolitical nature and dissing of Jon Stewart's "preaching" reveal a particular problem of women in comedy: playing it safe and being accomodating. She's an architypal good little woman, like most women comedians unfortunately, and the snippets I've seen of her sitcom say no less. Being head writer for SNL doesn't say much for her accomplishments in my mind; their particular attempts at "political satire" are about at the level of custard pie shots, only with no particular aim. Bush Snr loved his own depiction, which speaks volumes to their deliberate avoidance of doing anything but passively reinforcing mainstream attitudes and ideas. Sitting on the fence has never been so comfortable, I'm sure, but it ain't my idea of comedy.

I'm glad you're commenting on sexism and gender stereotyping as applied to Palin because I perceive it to be a problem among people who otherwise would be a lot more sensitive to the issue.  (*)

I'm a European lesbian who moved to Alaska 6 months ago and politically a green-hued lefty. Palin's politics could hardly be farther from mine, and she surely made herself an easy target by the way she presents herself (and the fact she isn't particularly well-educated or smart). However, for me there is no doubt that sexism has overshadowed rational engagement with Palin, her goals, means and record. As an Alaska resident, I find that most non-Alaskans (Americans or not) seem to be completely unawares that Palin was a pragmatic and non-extreme governor (a LOT better than the current guy, her ex running mate). She usually presents herself in a very popular/populist way as the stereotypically outdoorsy Alaskan gal (and I'm sure she enjoys hiking, fishing, hunting and sport). To attack her for her mannerisms or the way she named her children (**) .

Now to be sure, Tina Fey did her job as a political satirist, and I think it's perfectly ok to satirize politicians. It's the glee that those I feel are otherwise close to me ideologically seem to be throwing all principles overboard in a way they would be able to immediately identify as sexist were the target someone they'd otherwise agree with.

(*) I can't stand the "Michele Bachmann's husband must be gay" line either.
(**) In my experience, Alaskan kids are likely to have more unusual names, and that's for the Caucasian ones. I've met Denalis, Kodiaks, Danes....

Considering that Palin today used the phrase "polls are for dancers" in a speech, and has a history of saying blatantly stupid things in a straight context, I think that portraying her as a vapid person is very legitimate. Including Clinton in the skit helps to clarify that they are mocking Palin as a politician, not as a woman.

Except you're missing the point where Clinton has no charisma at all... people don't dislike her because she's a woman, they dislike her for the same reason they disliked Romney - they're both very smart, competent people who come across like the absolute worst of professional politicians. She is naturally calculating, not likable. She changes her positions, very obviously, based on the newest polls. She was "for the war before she was against it" and made up a story about entering Bosnia under sniper fire... she was quite completely out-gunned by Obama in the general charisma department.

*This* Clinton parody would have been almost identical if she were a man. The only comment on gender roles is that they decided to place her and Palin in the same skit, instead of her and Romney, Huckabee, or one of the other failed republican candidates.

That said, there have been numerous other parodies of her (mostly when Bill was still president) which point *much* more clearly to the double standard of women with a strong alpha personality, regarding her position in her marriage, making fun of her appearance, and insinuating that she is a lesbian.

Still... can you imagine an effete man accomplishing what she has done in politics? Even Barney Frank follows more norms of masculinity in in public appearance.

A while ago, I heard Jill Miller Zimon,a local council member and editor of a feminist blog, speak about a similar topic. One of her ideas that has always stuck with me addresses the fact that if women want to be respected leaders in business or politics, they have to conform to a male ideal of behaviour - behave like respected male leaders behave, like being assertive and not allowing their emotions to cloud their judgment. She suggested that maybe women should create their own style of leadership, one that celebrates the best attributes of femininity rather than masculinity. I guess I don't really have a projected vision for such a style, but I thought it was a very interesting and thought-provoking statement.

[...] SNL and the Double Bind for Women in Politics from Sociological Images.  This piece tackles the age-old “double-edge sword” by analyzing Tina Fey and Amy Poehler’s skit where they portrayed Sarah Palin and Hillary Clinton. [...]

SNL and the Double Bind for Women in Politics « Women's Initiative — October 9, 2011

[...] blog post from Sociological Images does a great job of explaining this double bind in politics. It uses the SNL sketch of Tina Fey and [...]

SNL AND THE DOUBLE BIND FOR WOMEN IN POLITICS | jungleriot — September 11, 2013