Hyperreality and the New Statue of Liberty Stamp

In honor of the American Sociological Association’s annual conference kicking off at Caesar’s Palace today — and because of my tweet about a Baudrillard-inspired drinking game — I am reposting this hilarious mistake on the part of the U.S. Postal Service.

A few years ago, my friend Brady introduced me to postmodernist theorist Jean Baudrillard’s arguments about hyperreality. Without getting into the details of semiotics or postmodernism, hyperreality refers to a situation where the signs (particularly media images) used to represent reality become more real to us than the original reality they were supposed to represent.

Soon after that, I was waiting to cross the street on the Strip here in Vegas and overheard a young woman remark to a friend that after visiting the New York-New York casino, she felt just like she’d actually been to New York. Her friend enthused, “I know! I don’t know why we’d ever even need to go there now! I feel like we’ve already seen it.”

I don’t know if Baudrillard discussed Las Vegas — Disneyland and L.A. were his favorite examples, from what I can tell — but you could certainly teach an entire class on hyperreality using Vegas as your case study.

Baudrillard came to mind when we read a BoingBoing article about a mistake from the U.S. Postal Service. The USPS recently released this stamp: 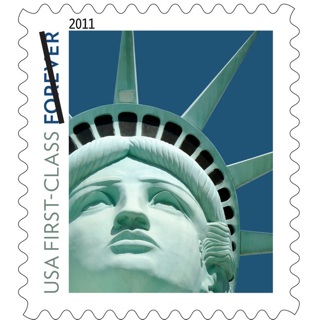 Close-ups reveal distinct differences between the original and the replica: the facial features are more defined on the replica, and the hair, the proportions of the arm, and folds of the clothing are different.

I think Baudrillard would get a kick out of this.

For more on hyperreality, see Baudrillard’s book Simulacra and Simulation. Also, for more on Vegas and simulation, you might check out Norman Denzin’s article “Rain Man in Las Vegas,” in Symbolic Interaction v. 16, p. 65-78 (1993).

What we call reality (or "real" reality) is a construct every bit as abstract as what some call "hyperreality."

So, to me at least it's a distinction without a significant difference even though other people might decide that it's significant (it's a matter of opinion, not fact). After all, the Postal Service can't put the "real" Statue of Liberty on a stamp even if it wanted to and then there's the whole issue of whether the statue itself (or any representation of it) is more or less important that what it's supposed to symbolize.

And since it's a stamp, the most important consideration (to me) is that a letter sent with it will reach it's intended destination. If so, then the stamp was "real" enough even if it was a genuine counterfeit of this stamp depicting the wrong statue (because "reality" is what we can get away with, no more and no less).

This is one of the best articles I've seen on this blog in a long time.

And considering that the statue has several conceptual statues before that and parts of it _travelled the world_, we can legitimately ask if there is a "real" statue.

Just a warning to anyone trying to approach Baudrillard's works: he is almost impossible to read. I consider myself a fairly intelligent person, but I've tried to read Simulacra and Simulation about five times before quitting because I had absolutely no idea what he was talking about. Postmodernism draws a lot of ire for being (purposely or not) obscurant and Baudrillard is no exception.

(1) . . . not to mention that the windows on the Las Vegas one are obviously painted.

(2) Q: What do you get when you cross a Deconstructionist with the Godfather?
A: You get an offer you can't understand.

Ooh. Hyper-reality. Thanks for the word, and the concept. I'll have to go look into it. Hopefully find a good Cliffs Notes version (outside of wikipedia).

(Thanks too to commenters for the advice about Boudrillard's incomprehensibility.)

Thanks Gwen. I've read coverage of this on a number of other blogs, but your post is the best.

As a side note, I've looked at this a bunch of times and have been continually perplexed by the crossing out of the word "forever." Is this supposed to hint at the mail not taking forever?

Excellent post. Baudrillard mentions Vegas briefly in his book, America. It is at the end. There isn't one of his characteristic treatments of Vegas, but on page 127 he says,

"You have only to see Las Vegas, sublime Las Vegas, rise in its entirety from the desert at nightfall bathed in phosphorescent lights, and return to the desert when the sun rises, after exhausting its intense, superficial energy all night long, still more intense in the first light of dawn, to understand the secret of the desert and the signs to be found there: a spellbinding discontinuity, an all-enveloping, intermittent radiation."

Baudrillard can be difficult, and at times, frankly banal and ridiculous. The professor that introduced me to his work as an undergrad told us just to read it, and try not to understand every word. If you take his basic conceptual framework of the simulacrum, and begin to read further, moments of brilliance emerge. The simulacrum is one of the more important concepts to emerge from the more extreme elements of the post-Frankfurt school postmodern left.

Yay, great post, I've always been interested in Baudrillard's ideas. With monuments such as the statue of liberty, people tend to see a lot more of them in postcards, photos and the such. A stamp, then, with a photo of a statue that attempts to simulate the reality of the 'real' (though, of course, not hyperreal) statue adds yet another layer of unreality!

I'm surprised there's not more of him here since his work on simulation could be quite interesting in looking at the manipulation of female and male bodies.

I go into get my eyes checked, get contacts again after many years. They offer me this new brand that just came out that are marketing them as HD contacts. High Definition contacts, like the TV improvements. I figure what I actually see in real life is HD....yes, they are very clear but are no more realmaking???

The original poster states that "hyperreality refers to a situation where the signs (particularly media images) used to represent reality become more real to us than the original reality they were supposed to represent."

One lasting example of this phenomena comes from religion (Christianity and Judaism). Biblical and historical accounts of Jerusalem and events there are more significant to people than is the actual locale. To quote from one source:

"The faiths of many European travelers was severely tested and their expectations shattered, by their initial encounter with 'sacred' Jerusalem. The Jerusalem they came to see was 'profaned', had become 'unholy', thus they had to look for the Jerusalem they sought somewhere else....
After their initial disappointment, travelers literally fled the city and took to the surrounding hills, finding the vision they sought in the open air and on the hilltops of the Mount of Olives."
See: http://www.jerusalemquarterly.org/ViewArticle.aspx?id=360

Brilliant comments and thank you. Loved it!

One reason I'm not jumping on the HDtv and Blu-ray bandwagon.....after watching a movie like that, real life looks low-def

Wait I'm confused, I thought I was buying the ACTUAL STATUE OF LIBERTY at the Post Office. Thanks for catching this goof! Thanks for mentioning Baudrillard, I googled him and saw that he's the man who built the Statue of Liberty.

[...] Hyperreality and the New Statue of Liberty Stamp (thesocietypages.org) [...]

An easy to digest, enjoyable read on hyperreality is Umberto Eco's Travels in Hyperreality.  Half of if is on Vegas, the other half on Disney World.  For anyone interested in the artistry of making space-age looking flying saucers and giant castles out of plywood and foam insulation, this is a must read.

[...] have something like 400,000 visitors a month and 12,700 Facebook fans.  Check out their recent post on the US Postal Service stamp that features a patriotic close-up of the Statue of Liberty…. [...]

Great thread. The people who pulled off this stamp must have had a good laugh.

Another tremondous work by USPS. Now one can enjoy all USPS services under liteblue. Login to liteblue from liteblue.usps.gov

Thanks for sharing with us! https://www.walgreenlistens.one/

Great Post. Thanks for sharing this with us. walgreenlistens

There are some interesting points in time in this article Best Overhead DVD Player for SUV but I don’t know if I see all of them center to heart. There is some validity but I will take hold of my opinion until I look into it further. Good article, thanks and we want more! Added to FeedBurner as well

Walgreens Listens is a pharmaceutical America based company. It is listed in second place as the largest pharma company in America.

WalgreensListens is said to serve the best food for a long time now. Walgreens Listens is sincerely dedicated to the best services and food excellence. To develop and implement new menus they perform an analysis. where they can understand the shortcomings they have been facing.

.At this final stage, all they need is your feedback to successfully implement your insights and resolve your issues. And the company isn’t just taking your valuable comments with a pinch of salt or free of cost.Walgreenslistens executed a connected with the WWW review to take an arrangement about Walgreenslistens Helpline notwithstanding your support level thereafter visiting service Click here Walgreenslistens