The Long Side of History

Peter Berger* takes issue with the phrase “on the wrong side of history.”  Mostly, he takes issue with those who use that phrase. Specifically, he refers to proponents of gay marriage who claim that the Defense of Marriage Act is “on the wrong side of history” (or in Berger’s acronym, OTWSOH) The trouble with this statement, Berger says, is that “we cannot know who or what is on the right side.”

Berger is correct (though he doesn’t offer much explanation) because the history that people are referring to hasn’t happened yet. The history of OTWSOH is the future, and we can’t know the future.  However — and here’s where Berger is wrong — we can make a pretty good guess about some things that will happen, at least in the short-run future. We can look at the trend — Americans becoming more accepting of gay marriage — and predict that the trend will continue, especially when we see that the young are more accepting than the old. 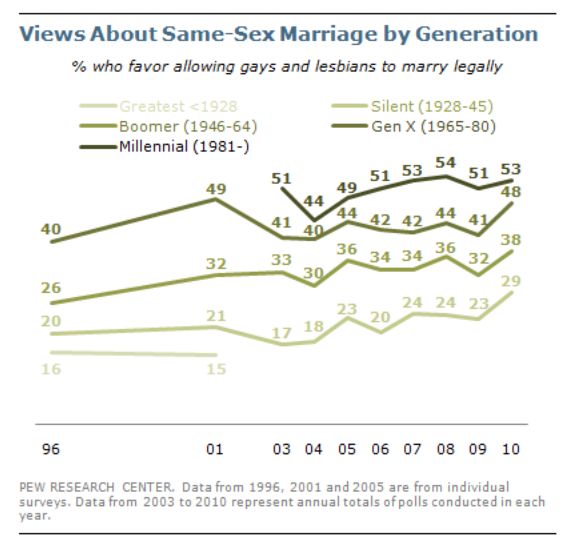 But beyond the short-run, who knows? It’s possible that the values, ideas, and even facts that are right today will, decades or centuries from now, be wrong.  So it may turn out that at some time in the future, people will think that gay marriage is a plague on civilization, that human slavery is a pretty good idea, that Shakespeare was a hack, and that Kevin Federline was a great musician.

The trouble with asking history, “Which side are you on?” is that history doesn’t end. It’s like the possibly true story of Henry Kissinger asking Chou En Lai about the implications of the French Revolution. Said the Chinese premier, “It’s too early to tell.”

At what point can we say, “This is it. Now we know which side history is on”?  We can’t, because when we wake up tomorrow, history will still be rolling on. Duncan Watts, in Everything Is Obvious… Once You Know the Answer, makes a similar point using the historical film “Butch Cassidy and the Sundance Kid.” The two robbers flee the US and go to Bolivia. Good idea? Since we know how the movie ends — that sepia freeze frame — we can safely say, “No, bad idea.” 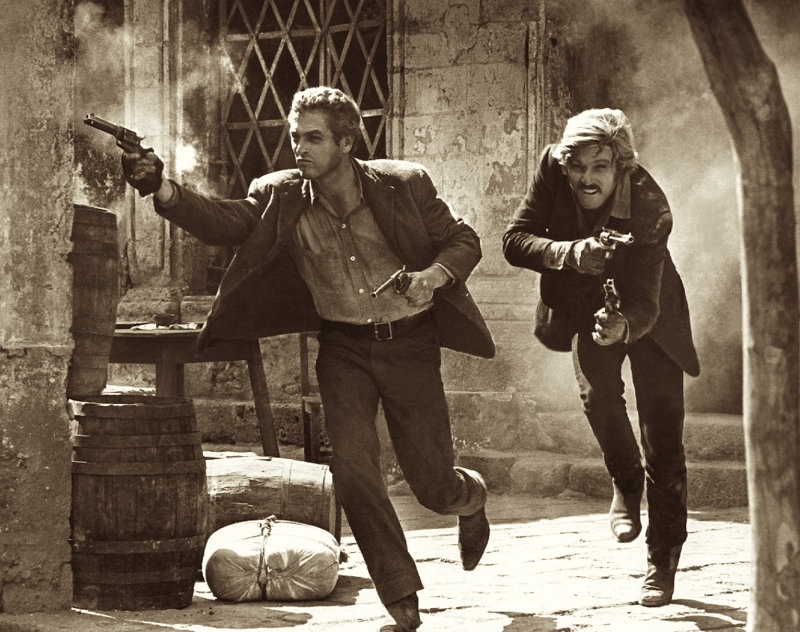 But if we had stopped the movie twenty minutes earlier, it would have seemed like a good idea. The vindictive lawman and his posse were about to find and kill them. A few minutes later in the film, Bolivia seemed again like a bad idea – it was a miserable place. Then, when their robberies in Bolivia were easy and lucrative, it seemed again like a good idea. And then, they got killed. Butch was 42, Sundance 31.

But history is not a movie. It doesn’t end. So at least for the long run, the OTWSOH argument claims certainty  about what is at best speculation. It says, “We know what will happen, and we know that we are on the right side of history, and those who are not with us are on the wrong side of history.” Some religious folks make similar claims not about history but about God.  “We are on God’s side,” they say, “and those who disagree with us are against God.”  They tend to populate the political right.  The OTWSOH argument, Berger says, “comes more naturally to those on the left,” mostly because that is the side that is pushing for historical change.  The two sides are indulging in a similar fallacy — knowing the unknowable — a fallacy which, to those who don’t share their views, makes them appear similarly arrogant.

* Yes, this is the same Peter Berger whose Social Construction of Reality (co-written with Thomas Luckman), published forty-five years ago, has an important place in sociology’s relatively short history.

I've always thought such claims are based on notions reflected in the MLKJr/Theodor Parker quote, "The arc of the moral universe is long, but it bends toward justice" (or as often misquoted, "The arc of history...") - which I read to say that in the long run human moral standards trend towards greater equality and acceptance of diversity.  Arguably idealistic or optimistic, and perhaps fallacious thinking, but I don't think necessarily arrogant (although perhaps more easily interpreted as arrogant when applied to any specific issue).  Certainly I don't think MLKJr's quote is interpreted as arrogant by most people on the right or left.  Interestingly, though, it does reveal the religious/moral underpinnings you draw parallels to.

Both the guest blogger and Berger seem to be taking this statement a bit too literally. There is, ultimately, no "side" to history itself, except the winner's version of it. But just as science, technology and art have become more sophisticated with time, so too has morality, which is a sort of applied social science when stripped of its cultural baggage. As one can be on the "wrong side" of scientific history (by backing a theory which has been disproven), one can be on the "wrong side" of moral history (by backing positions that reduce human rights instead of expanding them).

A particular culture may not retain those advancements, but it's rare that the advancements are lost to history for all time. They're typically spread and retained in some way, even if not within the culture that originated them.

The Moral Landscape: How Science Can Determine Human Values is an absolute must read, particularly for anyone tempted to take a relativistic view of morality.

One of the problems with the idea of OTWSOH is that it can make people complacent -- after all, if change for the better is inevitable, why put much effort into it? That's one of the things that can contributed to worsening conditions for the working class, women, and racialized people, in many areas of life -- we tend to assume that the early successes of the labour movement, women's liberation efforts, and the civil rights movement set in motion a historical trajectory that will continually move 'upward' . . . and we tend to ignore the evidence that in some respects these rights and freedoms have undergone regression.

Also, fundamentalist movements disrupt the narrative that history is necessarily progressing toward great degrees of freedom. Decades ago, the Afghani women who attended university and worked at high-status jobs probably had no notion that in the future they would be kept out of school and confined to their homes. Margaret Atwood's novel The Handmaid's Tale also envisions a similar future period for Americans under a misogynistic fundamentalist Christian regime.

This is a terrible argument and endemic of both the failures of much of the Left and academia.  Being "on the wrong side of history" is less about predicting the future course of events and more to do with making normative moral judgements about our social order, and the one we are trying to build, in a historical context.  I fully agree with Vidya about not deluding ourselves with enlightenment notions of perpetual progress.  Many people including the author have rescinded their ability to articulate any vision or to make moral claims about the world that get beyond personal opinion.  Not since the 60s has the Left articulated and fought for a moral politics - a vision of social transformation rooted in humanism and a sense of right and wrong. Too many people end up mimicking the cold rationality of the market or representative politics, etc.  As long as people who care about social justice leave the realm of emotion and morality and "values" to the Right and religious fundamentalists we will continue marching down this road we have been on - where we too are on the wrong side of history.

I think we can safely say that we do know that we will be on the wrong side in the end - sure, history goes back and forth on human rights and other things and if you compare the seniments regarding the peoples of Africa, Asia and Oceania during the enlightenment and the ones of the WWII era, you'll find that the former are arguably more liberal - but as a whole it seems that we're moving towards more freedoms and more equality and that within a 1000 years society will be unrecognizeable.

And by then it won't matter where we stand on same sex marriage anymore. And by that I don't mean that the antis are right, but that the spotligth might be on a whole other issue where the current western society is seen as barbaric. Maybe the focus will be on animal rights, maybe there's a minority that we've missed completely or maybe it will be a question of spirituality or science, but regardless we'll always be the primitive past that the future measures itself to.

History May Not Take Sides, But American Culture Does « Tethered Swimming — August 14, 2011

[...] academic debates about whether or not you can actually say that gay marriage opponents are “on the wrong side of history”.  History, after all, covers a lot of ground, and things that are morally acceptable in one era [...]

Odd movie choice as an example, given the last vestige of ambiguity that comes from ending on the freeze frame and not on their bullet-ridden bodies....

Using the ending of Butch Cassidy seems more like what they're telling us NOT to do: making an absolute judgement based on overwhelming evidence and the way things look right now.

Helpful Tool For Those Interested in Sex and Sexuality from a Sociological Perspective « Welcome to the Doctor's Office — January 12, 2012