The Atlantic recently posted an article by Conor Friedersdorf about the results of polls conducted by the Abu Dhabi branch of the Gallup organization, in cooperation with the U.S. branch, on the political attitudes of various religious groups in the U.S., particularly focusing on how Muslim Americans compare to other groups. The respondents were chosen as a subsample of respondents to ongoing Gallup telephone polling of hundreds of thousands of randomly-selected Americans each year. One major caveat: though Gallup reports that the overall sample is representative of the U.S. population as a whole, the response rate for the subsample of 2,482 individuals chosen to investigate these issues in depth was low: 21% for the first wave, 34% for the second (the methodology begins on p. 57 of the full report). The authors argue the data have been weighted to ensure representativeness, but the low response rates require caution.

One set of questions looked at attitudes about violence toward civilians, whether by military or non-military groups. As we see, Muslims were more likely than any other group to say targeting civilians is never justified:

But every group overwhelmingly said it is “never” justified for a non-military group to attack and kill civilians, though Friedersdorf points out that a not insignificant minority of Americans said that targeting civilians is at least somewhat justified — a proportion that might have been lower if the word “terrorism” had been used to describe targeting civilians, I suspect.

However, Americans are much more divided on whether the military is sometimes justified in targeting and killing civilians. Muslim Americans overwhelmingly reported it is “never” justified, but the only other group where over half of respondents held that view was for non-believers/agnostics. A solid majority of Protestants, Catholics, and Mormons, and a slim majority of Jews, said that it is “sometimes” justified for the military to target civilians:

The full report includes data on a wide variety of indicators of political engagement and perceptions of quality of life and the future. Consistent with the graphs above, Muslim Americans have less confidence in the military and law enforcement agencies such as the FBI than all other groups (with non-believers/agnostics have the second-lowest levels of confidence): 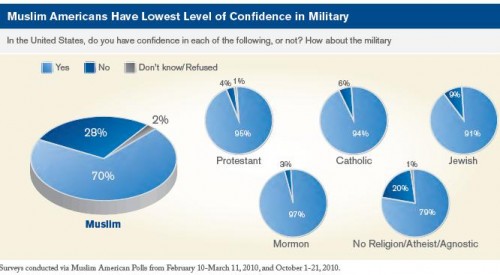 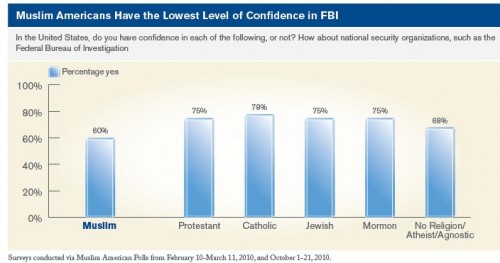 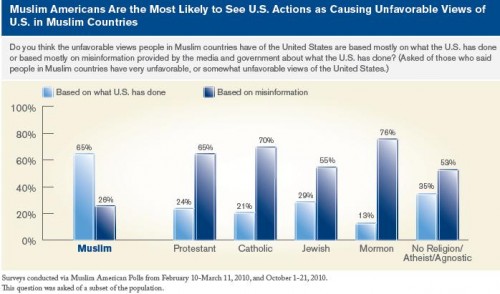 The report authors suggest this may be partially due to Muslim women who wear hijab being visibly recognizable as Muslims in a way that may lead to negative interactions or comments from others.

However, despite higher levels of perceived discrimination, overall, Muslim Americans had a generally optimistic view of their future in the U.S.; the majority of respondents said they will be thriving in the future, and they were slightly less likely than other groups to believe they will be struggling: 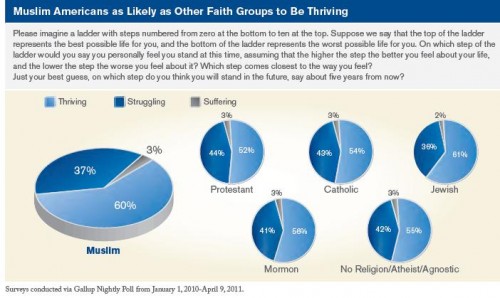 I’ve just posted a few items that stood out to me here. Check out the full report for a much fuller discussion of attitudes toward the wars in Iraq and Afghanistan, perceptions about quality of life in the U.S., major sources of self-identification (religion, ethnicity, citizenship, etc.), whether Muslims are loyal Americans, and more.

I saw these graphs and decided to look through the report, especially since I wondered if they had asked questions about how Muslim Americans deal with the topics of the wars in Iraq and Afghanistan, Al Qaeda, and whether they should speak out against Muslim extremism.

Also interesting to me was that a majority of all groups recognize that Muslim Americans aren't sympathetic to Al Qaeda, however, again it was Jewish and NAA Americans were the only other groups that had more than 2/3 of respondents with this point of view.

It's interesting to note that Muslim Americans were the only group that was evenly split on the question of whether Muslims should speak out against terrorism, but interestingly, most non-Muslim groups feel that Muslims aren't speaking out enough.

Also interesting is that Jewish and NAA Americans were also the only other groups that had more than 2/3 of respondents agreeing that Muslim Americans are loyal citizens. Interesting more -- considering how we normally characterize Jewish-Muslim relations -- how many more Jewish Americans held this view than the others.

These points were what were interesting to me, since a lot of the discussion that I heard about this topic was that Muslim Americans weren't loyal (enough), weren't speaking out (enough) against terrorism, weren't unsympatheic (enough) against Al Qaeda, etc. What these show is that it's (not surprising at all) a more complicated picture than what our narrative-driven (as opposed to fact-driven) mindsets might actually wish to believe.

True: I may be willing to accept these data more readily, since they tend to agree with my own viewpoints and perceptions of Muslims (not just Muslim Americans) that were developed while growing up overseas. :) However, until similar surveys (with similar levels of methodological standards) produce countervailing data, I'm sticking with the Gallup survey results.

Clearly, 21% of muslims (and 43-64% of other religions) are using a definition of 'civilian' or 'justified' that is incompatible with civilization.

I think everybody should discuss the 'target and kill civilians' question with their priest/preacher/pastor/rabbi/imam/ghoti/caliph/pope/other. After you get an answer to the question, question the answer as much as you can.

I'm stunned by the figures for 'confidence in the military' on the part of Americans -- that must average close to 95% support! I know the the US puts a lot of money and effort into promoting militaristic ideology among its populace and trying to present their professional killing forces as 'freedom-fighters', but I had no idea that such a high percentage of people actually believe those narratives.

Islam is Not the Problem | The Progressive Playbook — September 14, 2011

[...] to drive the last little nail in this myth’s coffin, another Gallup study found that American Muslims are the least likely of any religious segment (including non-religious) [...]