In a previous post I’ve argued against framing a preference for boy children as “culturally Asian.” New data from Gallup, sent in by Kari B., shows that this preference is alive and well among Americans, at least among young men.  While women are most likely to have no opinion and about equally likely to prefer a girl or boy, men are significantly more likely to prefer a boy.  This preference is strongest among younger men, but still present among men over 50.  Whereas women become increasingly indifferent with age and, secondarily, begin to prefer girls. 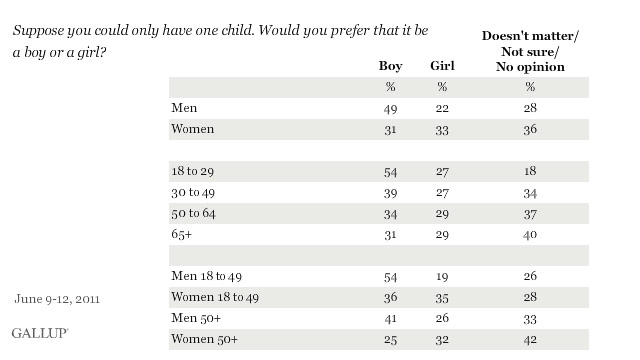 The editors at CNN note that, since children are mostly born to young people, and indifferent women may bend to men’s preferences, new sex selection technologies threaten to create a gender imbalance in the U.S.

I sat across from a man last night who emphasized the importance of having a boy to "carry on the family name."  Despite the fact that there's nothing significant about his family or its accomplishments (not a political name or a society family, for instance), he declared this to be a vital reason for wanting a boy child.

If "American" means "not Asian", does "Asian" mean "not American"?

When men, through this sort of sex-selection thing, start to swing the percentage away from it's 50/50(ish) numbers, I'm pretty sure women will still be blamed for rejecting 'perfectly good' men and will be cited as the reason why some men die unmarried and without progeny, even though there will literally not be enough women for all the men who feel entitled to 'have' one.

Also, as an alternative and complimentary expression of the male-baby-preference, I know that in China, where the numbers are already skewed, there is actually a phenomena where a portion of young men have no desire to find a female partner to procreate with just because of this imbalance. I hesitate to say nature is turning young men asexual to re-balance the population, but I would hypothesize that Chinese culture is subtly de-emphasizing young mens' need for a wife or partner and that is affecting the sexuality of Chinese citizens.

It's impossible - based strictly on the the numbers AND assuming (erroneously) that everyone is heterosexual - to have a 'one true love' for every man and woman in a country that starts to swing gender-heavy in either direction. You can't pair off if there aren't enough people to fill out the culturally-accepted pairs. I posit that you WILL see more asexual and homosexual couples because of the simple fact there will be a larger pool of men. I'm sure that even the suggestion of 'more homosexuals' scares the shit out of some of the people who prefer male babies because of gender-prejudice, but to that I say, well, they're just doing it to themselves. *grins*

Neat.  So all I have to do is "wish" to have a boy that makes the genetic adjustments to have more boys!  Awesome.
Seriously though, just because there is preference, doesn't mean that more boys will be born.  It doesn't work that way.  If there was female infanticide, that would be a different story, but I don't really see that going on in the US.

The ending comments don't take into account that the people capable of affording sex selection technologies would be older couples with less preference, while younger couples are more likely to have a preference but not necessarily the funds to carry out their wishes.

I saw that also. Yet, according to Mara Hvistendahl's new book Unnatural Selection (her page: http://bit.ly/q6GCie), almost all the couples who come to fertility clinics in the U.S. hoping to pay for sex-selective IVF are asking for girls, not boys. That's a certain niche, I guess.

Here a link to another article about that Gallop survey http://www.dailymail.co.uk/femail/article-2007948/How-twice-Americans-prefer-son-daughter.html June 2011
In addition to the information already covered about the larger preference among younger people for male babies, that article included this interesting survey result:

Even political stance made a difference.
Republicans were more likely than Democrats to state preference for a male
child.

Gallup said that the trend was 'driven partly
by the fact that American men are more likely to be Republicans and women are
more likely to identify as Democrats.

As a former adoption administrator, I can tell you from years of experience that more adoptive parents of any race prefer to adopt girls rather than boys. I believe part of the reason for this is the reluctance some men (even men willing to adopt a child or children) have in giving a boy child their surname. This article confirms my anecdotal experiences about adoptive parents' preference for girls

Here's a quote from that article:

"The authors suggest that this preference for girls in cases of adoptive children may be because adoptive parents “fear dysfunctional social behavior in adopted children and perceive girls as ‘less risky’ than boys in that respect.”

It should also be noted that regardless of their race, in the USA there has consistently been more boys in foster care than girls, and more boys available for adoption than girls.

"since children are mostly born to young people, and indifferent women may bend to men’s preferences, new sex selection technologies threaten to create a gender imbalance in the U.S."

But since most americans consider abortion in general and sex selection in particular immoral (whether it should be illegal or not) , the threat is probably not be so great.

The last sentence of the post gave me pause; do we really have enough evidence to conclude that a gender imbalance in the US would constitute a "threat"? And if so, to whom?

Recent literature on the topic has largely focused on the notion that a high male-to-female ratios historically correlate to higher rates of crime and violence, but present-day data from China tend to report more crime in less-imbalanced districts. Much is also made of the difficulty a surplus of hetero men might encounter in finding women to marry or satisfying "sexual needs" (strangely, no matter which journal I read I only see this phrase used in conjunction with men). But if we are to regard those possibilities as dangers, we could just as easily imagine the advantages that such a scenario would provide to women, whose socioeconomic standing and power within hetero partnerships could be greatly improved by their relative scarcity.

Of course, it's all rather alarmist anyway. The country-specific economic reasons for sex selection in China and India have a far greater impact on parents' decisions than casual cultural preferences, and they are almost non-existent in the US. Even if we're to take the above poll seriously, we'd have to consider a follow-up question, like "what if you could have two children?" (US families who spawn have an average of 1.86 children). If half of all parents used future technology to engineer a boy as their first child, how many would repeat that decision for their second? Third? Eighth?

Additionally, we can't really throw in a comment about "young women bending to men's preferences" without also mentioning that 40% of children in the US are born to single mothers (hey, that stat came from CNN too!). With that in mind, it seems statistically implausible that the men's preference column would influence sex-selection trends more heavily  than the women's.

"The editors at CNN note that, since children are mostly born to young
people, and indifferent women may bend to men’s preferences, new sex
selection technologies threaten to create a gender imbalance in the U.S."

doesn't account for the fact that some women might feel STRONGLY that it "doesn't matter."  Not having a preference =/ not having an opinion.  Perhaps those women feel their disinterest more strongly than their male partner feels preference for male offspring.  Needless to say, this study doesn't assess the strengths of the preferences, so it's sort of a wash in terms of concluding much of anything.

i do pretty much the exact same thing, local vhosts and all. taking nightly backups of /home is easy with rsync, so when anything goes awry, i just pull down the folder from my vps. since the cronjob itself is in the folder, even my backup script gets backed up. what ide do you use? Baggy pants