Erasing the City of Nairobi

Sadie M. sent in an example of the reproduction of the idea that “Africa” is an arid, desolate place where nature still dominates civilization.  The snapshot Sadie sent in was of Nairobi.  Nairobi is the 12th largest city on the continent of Africa with a population of over 3 million in the city and its surrounding suburbs.  It is the capital of Kenya and an economic, political, and financial hub in the region.

This is Nairobi on Google maps:

This is what comes up if you Google image Nairobi:

Nairobi is also not a desert plain.  The name, in Maasai, translates into “the place of cool waters” and it is popularly known as “Green City in the Sun” (wikipedia).

Despite all of this, Sadie’s snapshot shows that an in flight magazine depicted Nairobi as a savanna full of elephants and bereft of people.  The other two destinations featured — New York and Sydney — are pictured as they are. 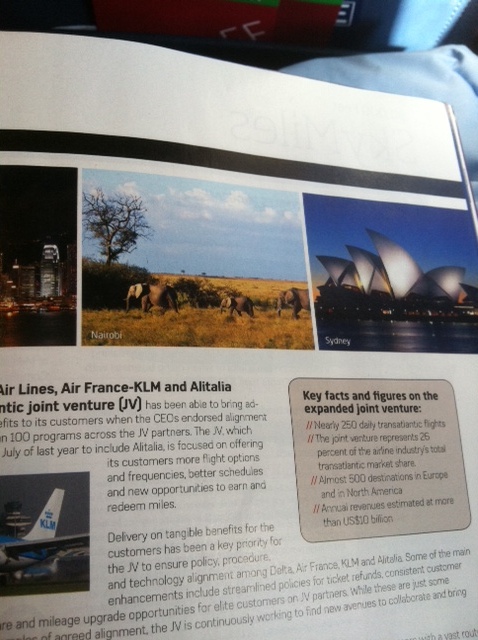 So there we have it: Another piece of advertising erasing the bustling, successful economies of Africa, and instead reproducing the idea that the entire continent is an uncivilized desert full of exotic animals.

See also: How Not to Write about Africa and The Single Story of “Africa.”

I don't get this post. If you're not jumping to a conclusion, then you're certainly pushing your readers towards one. Why not write this post about how Nairobi is positioning itself as an exciting tourist destination for international travelers? Maybe you are interested in instructing the masses about the (your) Truth of Kenya, but also maybe Kenyans are capable of constructing their own story, and tailoring it to specific audiences for specific (beneficial reasons)? It seems like you are writing about this in a negative way, maybe you're not, but that says as much about you as it does Kenya (I'm sure you must be aware of that...)

I guess the magazine could be aimed at tourists, so it is looking strictly from a touristic point of view.

My guess is that an international traveler going to Nairobi is going to see the wild life of Kenya, and savannah tours starting from Nairobi are probably the main attractions over there. That's not the case for NYC, because I guess for most people there isn't much to do outside NYC that is more interesting than what is in the city.

However I guess Sydney would be in the same situation as Nairobi, though I don't know if it is actually a starting point for wild life tours. Plus, Sydney has a few famous landmarks of its own, the opera house being easily the most recognizable. So I guess I can see why they'd put it there.

Either way, still kinda lame to label a picture of elephants as Nairobi, aside from what was argued in the article it is just misleading. The picture makes you think that Nairobi is some wild life reserve instead of a city.

Given the content of the article beneath, this is really glaring. I'm keeping more of an eye out for this lately.

There is a rather substantial difference between "savanna" and "desert," and they should not be treated as synonmys.  Savanna is grassland with a scattering of trees, and Nairobi is in fact situated between forest and savanna, with Nairobi National Park rolling right up to the edge of the city--that is what is depicted in the picture you include of the giraffe backed by skyscrapers.

I'm so glad you posted this! I just returned to the U.S. after a month in Africa and saw this ad in the in-flight magazine. I thought it was curious they would use a picture of what looks like the Serengeti to depict Nairobi.

"Another piece of advertising erasing the bustling, successful economies
of Africa, and instead reproducing the idea that the entire continent is
an uncivilized desert full of exotic animals."

These kind of brochures are normally put together by designers on limited budgets and timescales, usually with cheap royalty free images. There just isn't the time to find out how representative an image is in relation to the actual geopolitical status of a country. Most would rather finish it quickly and get on to more creative briefs (or just down the pub!).

All they're trying to do is find a reasonably colourful picture that doesn't clash with the surrounding page elements. It's more an act of omission than conspiratorial intent.

A similar phenomenon is at work with portrayals of the city of Mombasa, Kenya. It's often shown in movies as either being a desolate village in the middle of nowhere, or a backwater where people sell guns in every bar.

To my understanding, it's actually a perfectly modern city.

On the other hand, your description of Nairobi as a bustling, modern, financial hub risks airbrushing the horrendous slums, rampant HIV, low-level tribal/political armed conflict and Kenya's lost list of other woes out of the picture.  Besides, we see nothing indiginous or African in the multi-storey buildings in the capital.  They are derivative of any other Western style building, and fairly shabby examples at that.

Also, I'm curious why the person who submitted this blog post, or the blogger Lisa Wade, or any reader of this blog would assume that one photograph should or would be taken as representative of all the nations and places in the entire hugh, diverse continent of Africa. Perhaps this could be considered the case if in a specific period of time, the only article/s about African cities/places and the only photograph/s of African places in that specific inflight magazine featured wild animals.  Is that the case?

Furthermore, I find this sentence to be problematic: "Another piece of advertising erasing the bustling, successful economies of Africa, and instead reproducing the idea that the entire continent is an uncivilized desert full of exotic animals". I find this problematic in part because, as Bosola wrote in his or her comment, there are substantial differences between the savanna and the desert.

Also, the use of the referent "Africa"" here seems to be quite close to the archaic and erroneous view of Africa as one entity. Why should every photograph or article about a specific African location be assumed to represent all of a particular African nation or, even more ludicrous, all of the entire HUGH, diverse continent of Africa? One photograph and one article wouldn't be thought to represent the sum total of a specific nation (or city) in Europe or the entire continent of Europe. I believe that it's long past time that people got over this tendency to consider Black people, places, and things as monoliths.

In addition, it's my opinion that the use of the descriptors "uncivilized" and "exotic animals" in a post about how not to promote an African city serves to remind readers about those negative stereotypes of the African continent, It's ironical that this is done at the same time the author chides that un-named publication for being stereotypical. It seems to me that the above noted sentence, if not this entire post, is  another example of how not to write about an African city/place.

The idea of Nairobi as a "bustling, successful economy" is no less fanciful than the portrayal of it as a wildlife preserve.

Interestingly, Nairobi has the unique distinction of having the closest major wildlife reserve to any major city in the world. I don't think Nairobi National Park is known to have elephants, although it does have giraffes, lions, rhinos, and other iconic megafauna.

For the purposes of a magazine aimed at tourists who are wealthy enough to afford an international flight, the proximity of Nairobi to the famed wildlife is obviously a more appealing draw than the city's economy - or, indeed, the city itself. The prevalence of skyscrapers tells us nothing about why one should choose Nairobi as a destination, and obscures the alarmingly high rate of violent crime, robbery, homelessness, and other typical struggles of a metropolis with limited means to adapt to rapid population growth.

I do see the point that portraying Africa as a place for animals while highlighting the man-made features of western cities is problematic in aggregate (although Cairo is a different matter, no?). The thing is, no single image can capture the enormity and diversity of experience in any city. The Sydney Opera House, for example, has very, very little to do with most facets of life in Sydney, and unlike the Eiffel Tower or the skyscrapers of Manhattan, it's not even visible from anywhere in the city center. You could say that focusing on that single building "erases" the city's sandy beaches, multi-ethnic neighborhoods, lush vegetation, sprawling suburbs, rowdy nightlife, and dull office towers.

But each of those things can be found in a lot of cities, and only Sydney has a weird shell-shaped opera house. Similarly, New York and Sydney do not happen to be near a herd of wild elephants.

Kenya, from Nairobi, now living in the U.S. If I had a dime for every stupid question I've been asked about where I'm from

Like all cities, Nairobi has its good points and its bad  The problem is that the only narrative of Africa is of either a jungle or a war torn ravaged place. Case in point, the post by Gilbert Pinfold illustrates my point.

On the other hand, your description of Nairobi as a bustling, modern, financial hub risks airbrushing the horrendous slums, rampant HIV, low-level tribal/political armed conflict and Kenya's lost list of other woes out of the picture.  Besides, we see nothing indiginous or African in the multi-storey buildings in the capital.  They are derivative of any other Western style building, and fairly shabby examples at that.

Yes, Nairobi has problems, but so do most large cities, and saying that every building in Nairobi is derivative and pretty condescending (eg, exactly what would you call K.I.C.C http://www.kicc.co.ke/) and has a pretty narrow view of what 'African' is.

Is a photo of the opera house really an accurate depiction of the entire city of Sydney? No, it's a highlight of a unique aspect of a city that (I imagine) is generally similar to a lot of other cities.

I remember a similar discussion surrounding the ‘No.1 Ladies
detective agency’ series (book and tv show) in the UK press a while ago. The
character lives in Gaborone, the capital of Botswana. The first google images
result gives you this - http://www.botswana-places.co.za/gaborone_city.jpg

Compare with a typical set from the tv show - http://media.monstersandcritics.com/articles2/1467478/article_images/no1ladies03.jpg

Or much more problematic, the book cover - http://3.bp.blogspot.com/-wDFNXk-tCM8/TdWO_yzsr8I/AAAAAAAAAJA/awKbiC0Oces/s1600/The-No_1-Ladies-Detective-Agency.jpg

[...] always insightful and often disheartening “Sociological Images” blog notes how advertising can reinforce stereotypes about Africa by doing things like erasing Nairobi. I [...]

Having just been to Nairobi a few weeks ago, I appreciate the sentiment behind this post, but respectfully disagree with the suppositions. As other comments have pointed out, the popularity of the Nairobi national park within the city limits makes this a moot point. Photos from my tour of the park, and more counterpoints, here:
http://www.newelty.com/2011/08/08/the-real-nairobi/