Yesterday I posted about some children’s luggage that normalizes gendered occupations. Given that, I thought I’d follow up with several more examples of gendering kids’ stuff that have been sitting in our inbox.

Erin M. saw this image in a Land’s End catalog for kids’ clothing a while back. It draws on the idea that boys and girls are just inherently different, with girls needing things that are “pretty” while boys need stuff that’s “rugged”: 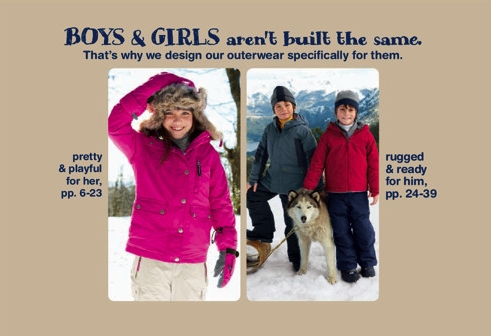 Caspian P. snapped this photo of two video games (by different companies) that efficiently summarize who we assume will be interested in what: 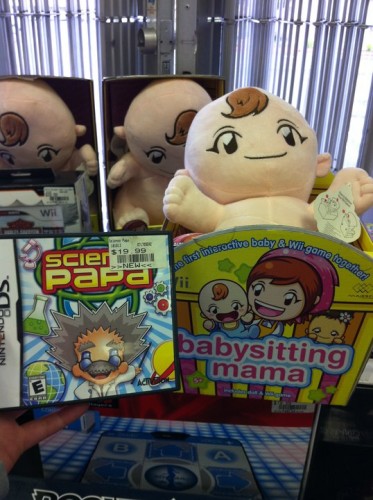 Finally, Cheryl S. noticed that J. Crew decided to market some of their boys’ clothing to girls. Rather than designating the clothes as unisex, or listing them as boys’ items in the boys’ section and girls’ items in the girls’ section, they instead created a section in the girls’ part of the website called Borrowed from My Brother: 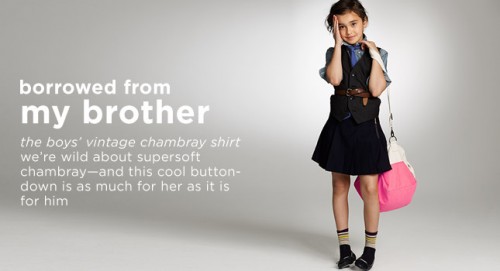 As Cheryl points out, there is no “borrowed from my sister” section for boys. We accept the idea of women wearing men’s clothing, even seeing it as potentially sexy, in a way that we don’t tolerate or condone men crossing gender lines to wear women’s items or take on other aspects of femininity. J. Crew simply applies this wider cultural acceptance of women taking on some aspects of masculinity (as long as they balance it with enough signs of femininity), which we see in the marketing of “boyfriend jeans” to women, and applies it to kids.

Maybe physiology has changed since I was a kid, but the basic body plan of males and females are -- save for what's under the underwear -- is effectively the same before puberty. What's with boys and girls aren't built the same? I mean, yes, the terms could refer to any male or female up to the age of majority (18 in most places), and yes, for those last years, boys and girls are not built the same. However, the kids shown in the picture? Not so much.

Not so much, that is, other than what we have placed upon them. For truth in advertising, it should read, "Boy and girl constructs aren't built the same."

Science Papa is an even clearer reference to the Cooking Mama DS game (http://en.wikipedia.org/wiki/Cooking_Mama), although still from a different developer. When Science Papa was announced, Majesco, the company behind Cooking Mama, even responded as the Mama herself:

Outrageous ads! The first one is so obvious, too, as it is so biologically deterministic and reflective of our larger cultural values regarding the sex-classes. Wowza.

Remember the hubbub over the J. Crew ad featuring a young boy who likes to wear pink (GASP!) nail polish?

seems to be unique to levi's at the moment but: http://us.levi.com/product/index.jsp?productId=10911925 'ex-girlfriend jeans', produced by a mainstream manufacturer, seem to condone men wearing women's (or women's inspired) items.

nice to see j. crew getting skewered from both sides. if they have a boy with pink nail polish, they're perverts. if they've got a girl borrowing her brother's clothes, they're sexist. sheesh.

perhaps the gendering of the children's clothing are only geared toward children (for obvious reason), but more importantly to makes the parents to buy it for their kids.  If the clothing ad isn't appealing toward the parents, it would be difficult for the sales rate.  The targeted population of these companies above can be still quite conventional when it comes to gender role, and many parent still want their kids to fit into those mold.

Just like children book who have a "moral" at the end of the stories.  We adult don't seek entertainment to be educated all the time, and yet we cannot let out kids to read for fun?

Hanna Andersson has not old enough for a boyfriend jeans  which just compounds these problems.

The idea of boyfriends(or in this case brother's) stuff as a marketing strategy faschinates me. It's 2011, and women are buying masculine clothing for themselves, sometimes paying a lot, and the advertising doesn't expect anything else. But apparently the customers are still supposed to pretend that the clothes that they bought belong to someone else, and by extension project an image of themselves as owned by another man - and of course "man" is the buzzword here, I doubt that anyone think up a campaign of "borrowed it from my butch". So all in all, we have a trend of women being encouraged to abandon the clothing style that is calculated to fit their bodies to the male gaze in favour for one where the titillation comes from the abstract concept of being "owned" by a man. Uplifting...

Bah! This reminds me of something else--have you seen those items in the women's section of mainstream young adult clothing stores called "boyfriend _________ (insert item of clothing)", e.g., "boyfriend pants"? The idea is that the pants are supposed to make women look like they spent the night at their boyfriend's and then wore his pants/sweater/t-shirt/whatever home.  E.g.: http://www.zappos.com/boyfriend-pants?gclid=CJT9y5eJtKoCFRJ6gwodqQ3K9Q.

I have no idea whether they just are re-selling some mens' clothing or if they designed these items specifically for women--though the latter seems much more likely. In any case, it demonstrates a need to provide a narrative explaining why women would ever, ever wear clothing that is less than form-fitting and "feminine". In this case, the narrative emphasizes that these women are conforming with heterosexual norms. "Look! Wearing slightly loose clothes *doesn't* mean I'm a lesbian!" Ugh.

I WAS happy to see "girlfriend" jeans on boys/men in the last few years. A tiny bit of balance.

Are the patterns even different for the boys' parkas and girls' parkas?

I was trying to get some jeans for my four year old daughter recently, and went to H&M in the hope that they'd have organic cotton jeans. They didn't, and in the girls' section I had the choice between two styles: "Skinny" and "Boyfriend". Uhm. No.

Coats..need to be waterproof and warm and comfy to wear and that's it! Really don't get why they have to be gendered at all! I once acquired a free coat for DD when a friend of a friend, who had bought it for her son, noticed that the lining of the navy blue coat had almost invisible flowers in it and a tiny butterfly motif on the pocket. I would have put it on a boy, but it was perfect for Hannah...always a struggle getting a "girl's" coat that isn;t pink!

On the subject of the "Borrowed from my Brother" slant to marketing:
It brings to mind the famous Navy recruiting poster, whose tagline was
"Gee, I wish I were a man I'd Join the Navy"
http://rlv.zcache.com/if_i_were_a_man_id_join_the_navy_poster-p228129172201063856trma_400.jpg
This "Borrowed from my Brother" slant may be a holdover from earlier days when men defended the country in military combat, while women were relegated to support roles.
On that same subject, the lyrics to a famous song from World War I comes to mind:

"Keep the Home Fires Burning, While your hearts are yearning, Though your lads are far away they dream of home. There's a silver lining, through the dark clouds shining, Turn the dark cloud inside out, 'til the boys come home."