The Pew Research Center just released an analysis of 2009 government data on the wealth gap between White non-Hispanics, African Americans, and Hispanics, and it’s pretty depressing. It’s not just that the gap is so large, but also that Hispanic and African American households have such low median worth in absolute terms (p. 13 in the report): 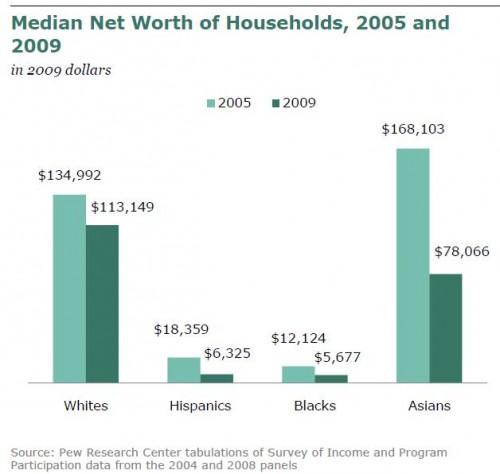 A quarter of Hispanics and Blacks have no assets other than a vehicle, compared to 6% of Whites. And 35% of Black and 31% of Hispanic households had negative median net worth in 2009, with their debts outweighing all of their assets; this was true of only 15% of White non-Hispanics.This is partially because African Americans and especially Hispanics were disproportionately hit by the effects of the housing crisis, the single largest source of reduced wealth. Overall, those two groups have suffered a much more dramatic loss in assets than Whites (sorry, Asians weren’t included in all the images, and Native Americans aren’t included in any): 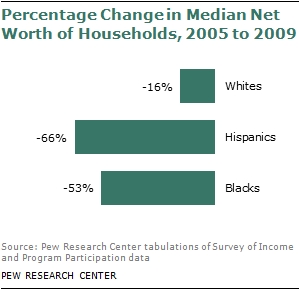 The result is a wealth gap that is the largest it has ever been since the government began making such data available in the early ’80s. White non-Hispanics have nearly 20 times higher median wealth than Blacks, and 15 times as much as Hispanics:

For more details, check out the full report. The implications of these disparities, and the low levels of financial assets available to African Americans and Hispanics compared to Whites, is truly stunning.

While we work to improve conditions in this nation, I hope that we also try to help other people in very horrific situations such as in the Horn of Africa.

So the question is, why is this still trending that direction? When federal taxes are paid overwhelmingly by the "haves" in the top 50% of the income bracket, and minorities make up over 50% of welfare recipients. When racism still very obviously exists, but has been driven farther underground by legal and cultural equality rules.

My guess is the drug war destroying the good in minority culture, but unless legalization gets a *lot* more momentum we won't get to test that theory for a while.

Why didn't the research center probe this more?

This is by far the most disturbing graph I've seen all year. First, all the U.S. net worth is going away in every racial category. Second, Asian-Americans seem to have tied up a lot of net worth in real estate, and then the bubble burst. Third, the numbers for African-Americans and Hispanics are so bad that I'm suddenly afraid of race riots, which wouldn't be unjustified. And fourth, the Whites category includes Bill Gates, Trump, Warren Buffet, etc. Didn't their money increase? That means the rest of European-Americans must have plummeted severely. And finally, why isn't there a mixed race category? Or is that too complicated?

[...] post-housing bust, is Whites with $113, 149, while for blacks and hispanics, not even topping above $6400. These numbers continue to reaffirm what many already acknowledge, and what some willfully deny, and [...]

Well, I grew up in the Baltimore area and I can tell you that Blacks (we don't have too many Hispanic folks yet) simply LOVE to spend money to look flashy.

See my point here? They simply can't save for the life of 'em. I know plenty of "poor" Whites doing just fine off of $40,000 per year with only one income earner, but African Americans simply can't seem to put a cent into a savings account even when they make far more than that.

Maybe it's the rap music?

Tell me if I'm wrong. Seriously, I know I'm generalizing, but show me where I'm incorrect.