Recently I posted about the loss of genetic diversity in industrial agriculture, partially due to increasing concentration at every link in food commodity chains, from the farm to the grocery store. This image from the Centre for Research on Globalization, sent in by Rick T. of the University of Western Ontario, illustrates the process of concentration at the farm level. In the U.S., the total number of farms has fallen from an all-time high of over 6.3 million to just over 2.2 million. Meanwhile, the average size per farm nearly tripled between 1900 and 2007, from 147 to 418 acres. 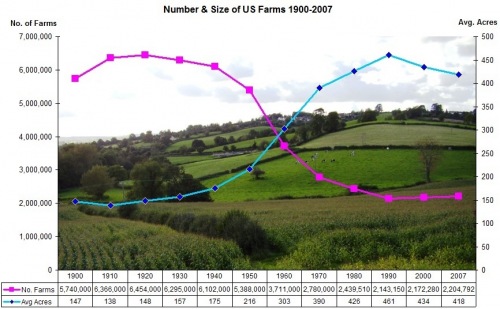 A 2010 USDA report provides detailed information about the structure of U.S. agriculture. For instance, overall, average farm household income is higher than the U.S. average, though I’d rather see the median income to reduce the impact of outliers on the calculation. But as the bottom line shows, farm households are highly dependent on non-farm income for their survival. Overall, farm income accounts for less than 20% of the total income of farming families:

And as we saw recently with the mortgage interest deduction program, the benefits of farm subsidies are unevenly distribution. Small-scale family farms (defined as operator-owned farms with less than $250,000 in sales — which does not mean $250,000 in profit, of course) make up 88.3% of all farms in the U.S., while large-scale family farms (operator-owned farms with sales over $250,000) are 9.3%: 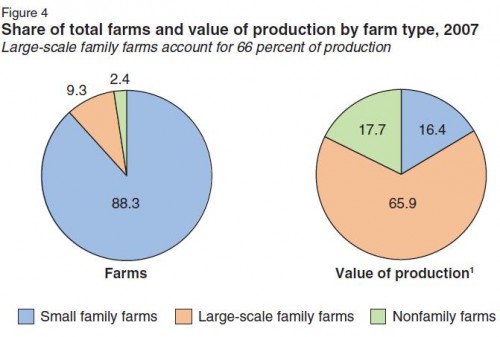 While small-scale family farmers receive the majority of land-retirement payments — that is, subsidies in return for taking land out of agricultural production — large-scale family farms are the major beneficiaries of commodity payments such as price supports that subsidize the cost of production:

Of course, that doesn’t mean that small-scale producers don’t benefit from farm subsidy programs, but as with the mortgage interest tax deduction, they are set up to reward size — the more you have, the more you get. Whether farm subsidies are essential to preserving small family farms or actually hurt them by artificially supporting capital-intensive large-scale production is a topic of much debate within agricultural circles.

All farm subsidies need to be ended

[...] While the vast majority of American farmers run small-scale operations, large-scale family farming d...  These massive operations also benefit most from government crop subsidies, while small-timers predominantly enroll in programs that pay them to take land out of production.  Now, I’d be all for subsidies if they helped make nutritious foods available to the poor at low cost, but the vast majority of subsidized crops are either directly exported or go straight into making the junk food fueling the obesity epidemic in this country.  That’s right, your tax dollars are hard at work producing high-fructose corn syrup for PepsiCo. [...]

[…] ▪Small farms are being consolidated up into big agriculture […]