Changes in language seem to just happen. Nobody sets out to introduce a change, but suddenly people are saying “groovy” or “my bad.” And then they’re not. Even written language changes, though the evolution is slower.

Last weekend, I saw this sign at a goat farm on Long Island. 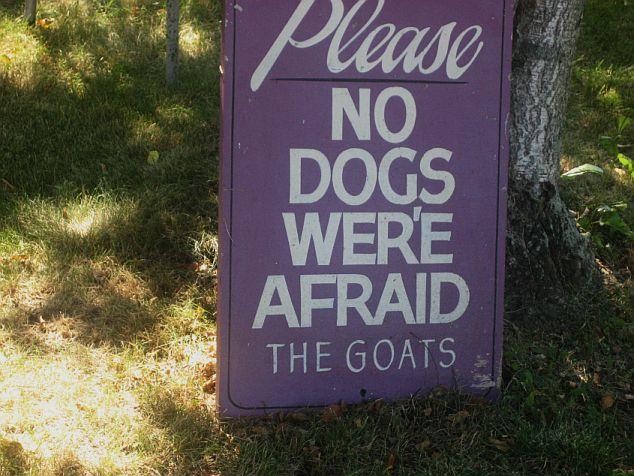 I used to care about the apostrophe, but after years of reading student papers about “different society’s,” I have long accepted that the tide is against me. The apostrophe today is where spelling was a few hundred years ago – you can pretty much make up your own rules.

Sometimes the rule is fairly clear: use an apostrophe in plurals when leaving it out makes the word look like a different word rather than a plural form of the original. Change the “y” in “society” to “ies” and it looks too different. “Of all the cafe’s, I like the one with lime martini’s.” The “correct” version is cafes and martinis. but I think they take a nanosecond or two longer to mentally process. 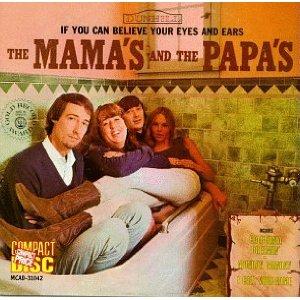 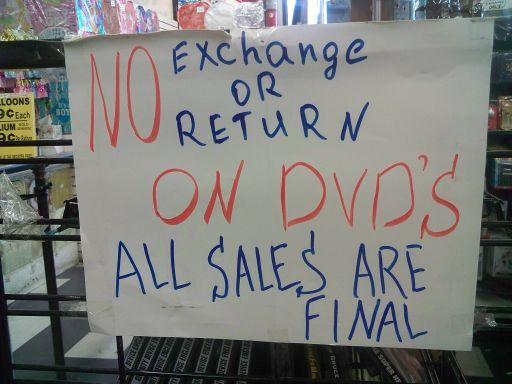 Technically, it should be “ON DVDS.” But DVDS looks like it’s some government agency (I gotta go down to the DVDS tomorrow) or maybe a disease.

It’s not always easy to figure out what rule or logic the writer is following. The little apostrophe seems to be plunked in almost at random. Not random, really. It’s usually before an “s.” But why does Old Navy say, “Nobody get’s hurt”? 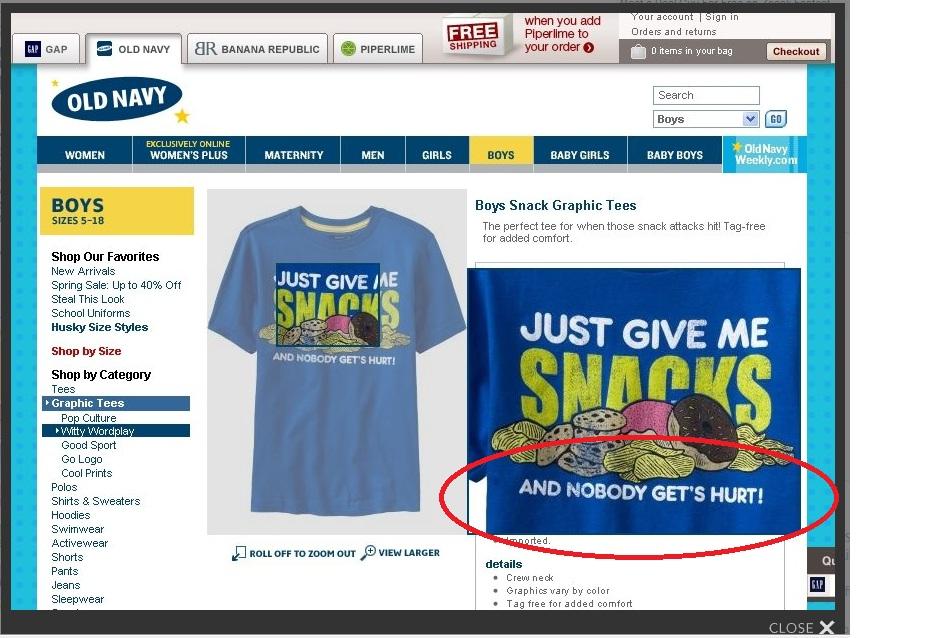 There’s a prescriptivist Website, ApostropheAbuse.com, that collects these (that’s where I found the DVDS and Old Navy pictures). They’re fighting a losing battle.

Technology matters – I guess that’s the sociological point here. The invention of print and then the widespread dissemination of identical texts herded us towards standardization. Printers became a separate professional group (not part of the church or state), and most of them were in the same place (London). They had a stranglehold on published spelling.

For the last few decades, anyone could be a printer. The page you are now reading might harbor countless errors in punctuation and spelling (though spell-checkers greatly reduce misspellings), but it looks just as good as an online article in the Times, and it’s published in a similar way to potentially as many readers. And now there’s texting. It’s already pushing upper case letters off the screen, and the apostrophe forecast doesn’t look so good either. But what will still be interesting is not the missing apostrophe but the apostrophe added where, by traditional rules, it doesn’t belong.

I still can’t figure out WER’E.

The DVD one is correct, you use an apostrophe when pluralizing an acronym. Smh.

the way I learned it was:
when spelling DVD's apostrophe-apostrophe indicates an 'is'
DVDs-no apostrophe is the plural of DVD

an apostrophe indicates a shortening of something (are,is...)

One big question: Isn't there a society for american language or something that standardizes grammar and spelling rules?

I'm asking, because for german and french, there is a official source I can refer to. It is always clear whether something is spelled correctly, no matter how many college students get it wrong.

The first one is easy to explain.  It was written by goats.

The problem with 'evolving' apostrophe usage is it makes it hard to understand the intended message, and leads to communication breakdowns. As a visual reader, who recognizes words by their visual form, I often have to pause for a couple of seconds to make sense of words/phrases with misplaced apostrophes. In terms of understanding road signs, advertisements, tshirt slogans, etc -- anything which passes by the individual relatively quickly -- apostrophe problems may derail the transmission of the message.

I haven't figured out yet how to make capital letters while texting. Nor have I figured out how to make any punctuation marks including apostrophes. I suppose I should learn. But since I don't text a lot, it's not a priority. If I want to make a distinction between "we're" and "were" (for example),  I write "we are".

At least I don't confuse the words "were", "we're", and "where" . Those three words-and especially the "were" for "we're"- are VERY frequently found in playground rhymes and comments about them that are sent to my Cocojams website. Sometimes it's easy to figure out in the context of the rhyme or comment which "were" word is meant.  Other times, it's much more difficult to discern. That's especially the case when the person sending in a rhyme or comment uses the essay form of run on lines or sentences with little or no punctuation and little or no capitalization. Unfortunately, it appears that this form of writing is becoming increasingly common nowadays.

Comprehension definitely is much less important than speed and typing ease.

"'Of all the cafe’s, I like the one with lime martini’s.' The 'correct' version is cafes and martinis. but I think they take a nanosecond or two longer to mentally process."

The correct version should only take longer to process if you are used to using apostrophes incorrectly. It took me longer than a nanosecond to figure out that "cafe's" was supposed to be plural. Based on the context, a contraction wouldn't make sense ("Of all the cafe is..."), so to me it looks like a possessive that's missing its object. Of all the cafe's...what? Of all the cafe's customers? Of all the cafe's drinks?

Apostrophes already do double duty, between contractions and possession. Adding a third function (showing a plural) is just too much to ask for one little punctuation mark.

Back in middle school I was in an advanced English/Reading course.  My teacher Mrs. Pace would constantly tell us stories about seeing signs such as "Apple's 45 cents" or "Employee's Only." She'd say "Do the apples own 45 cents?  How can employee's be in possession of 'only' and what is an 'only'?"  We were encouraged to be Grammar Cops and take pictures of grammatical and spelling errors (and correct them if at all possible).  We were her force of Grammar Cops.  Making the world a better place for English.  My biggest accomplishment as a Grammar Cop was fixing an error at my post office with white paint.  The employees no longer own the "only."  (I also found out on many occasions that adults didn't like to be corrected by a 12 year old girl.)

Auto-correction on the iPhone changes "its" to "it's" whether it's appropriate or not. I haven't been able to tell whether it does this every time, or has some faulty algorithm to decide which I mean to use. Though, if the latter, I've never observed it remove the apostrophe.

I have to be hones't.  I dont' really understand what thi's post is trying to get across. Am I the only one w'ho does'nt get it?

Have you seen the blog of unnecessary quotations? Don't even get me started.
http://www.unnecessaryquotes.com/

If you read any of my updates @adiosbarbie:twitter you'll see that I'm a huge fan of puttin' apostrophes where they dont' belong. I also like interchanging 'there' and 'their' along with 'were' and 'we're'. Is what I just wrote even correct?

"WERE" looks too strange, so the word needs an apostrophe,but it doesn't fit between the parallel bars of the R and E. The curve of the R makes room for it, therefore, "WER'E"

(disclaimer: I am a linguist)

I generally agree with your statements about the changing usage of apostrophes, Gwen, but your initial example seems a little questionable to me, because it doesn't seem like that sign was written by a native English speaker (?). Like, what does it even mean? The grammar is incoherent.

Sometimes even the technology we rely on to save us from having to memorize spelling and grammar rules seems confused. The corrective typing feature on my iPhone consistently changes "lets" to "let's" every time - even if I'm using it as a synonym for "allow," as in "He lets his kids get away with anything" or "Whenever she lets the dog back in, she forgets to lock the door" (rather than "let's go [do whatever]!"). Is "lets" really so infrequently used that it made more sense to correct for it than not?

It also autocorrects "hell" into "he'll" every time, but that just seems to be Apple's attempt to pretend people don't swear. ;P (It also sporadically corrects ill to I'll, even if I mean sick.)

Here you have a picture of a Bus of La Rioja city (Argentina) http://bit.ly/nf4088
Please note the apostrophe in "Riojano's".
Apostrophe has no use in scholar conventional spanish. As i learned both languages (spanish and my awful english) in school reading that kind of texts makes me uncomfortable. And i can only guess what people are meaning when they use it in such ways...

It is not a "losing battle". It will always remain a helpful way to tell the educated from the uneducated... often times very necessary information to have.

I have come to believe that the largest part of the problem is a general lack of attention to proper use of the language. While the apostrophe is a definite issue - in my mind - the wild misuse of the spelling "there" for absolutely every instance of the sound is frustrating in the extreme. I actually saw an on-line post in response to a sporting event some time ago that read (although I doubt I can get it exact, it is close enough to make the point): " There just upset they lost. If there not able to take criticism, they shouldn't be there." When I pointed this out to a (university) professor I was told that it was acceptable. "Were you able to figure out the meaning? Then it's alright." So I wrote on the board "There home" and asked the meaning of that, but got no answer.

There is an extra apostrophe in the US Constitution: Article I, Section 10, Paragraph 2,

No State shall, without the Consent of the Congress, lay any Imposts or Duties on Imports or Exports, except
what may be absolutely necessary for executing it's
inspection Laws: and the net Produce of all Duties and Imposts, laid by any State on Imports or
Exports, shall be for the Use of the Treasury of the United States; and all such
Laws shall be subject to the Revision and Controul
of the Congress.

"Proper" grammar is a very elitist, ableist, and classist concept (and yes, I DID use the oxford comma, style guides be damned!). Alright, on one hand, it makes things easier and more efficient to read. But on the other hand, criticizing "incorrect" grammar is oppressing, don't you think? I'd much rather discuss what is actually being said (such as the absurdity that I cannot return or exchange any DVD's! Outrageous).

This is actually a common problem and issue for some people who tend to use apostrophes in a wrong way which they thought that it's right. A single apostrophe could mean something in your work.