Megan H. and Ami R. sent in contrasting examples of using gender to market fuel-efficient cars. Megan saw this ad (one in a series that plays on the “I’m a Mac/I’m a PC” Apple ads) advocating electric cars over gasoline-powered ones. In this ad, femininity is associated with environmental responsibility. The most stereotypically masculine man in the ad — the blue-collar worker in a hard hat and filthy clothes — represents the harmful oil industry. Beneficial, good wind energy, on the other hand, is personified by a pretty woman in a filmy dress. Her beauty renders the bad guys speechless:

Dodge, on the other hand, wants to distance its claims to fuel efficiency from any association with femininity. Ami found this ad for the new Dodge Charger in the magazine for Go! Chapel Hill, an organization that advocates less car use: 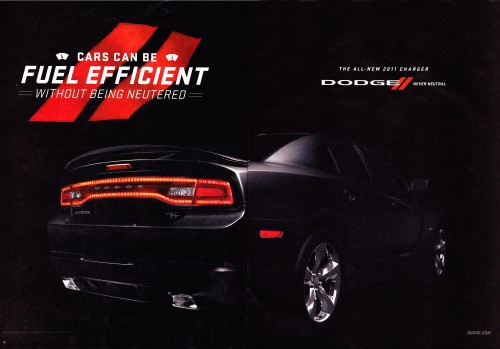 So here, fuel efficiency with is also associated with femininity, but in the negative sense of emasculation. The Charger is the one exception to the other fuel efficient cars out there. You can get better gas mileage and still protect your manly reputation.

For other examples of gender representations of the environment or environmental movement, see our previous posts on femininity and benign nature, using PETA tactics to oppose the BP oil spill, nature in vintage men’s magazines, and even girls can drive electric cars!

Where's feminity in the Dodge ad? Do you imply that being neutered (or neutral, since its is also written) makes one feminine?

Where's feminity in the Dodge ad? Do you imply that being neutered (or neutral, since its is also written) makes one feminine?

In the first advertisement, the makers of the commercial seem to have also included a (rather unnecessary) triple entendre spoken by one of the male actors: "Blow, baby. Blow."

First, of course, the advertisement could be referring to wind energy, as suggested by the cartoon electric windmills onscreen.  Second, the wind blowing through the woman's hair, as she swings her head back and forth.  Third, of course, could be a reference to some other "blow," which, like the latter, sexualizes the woman onscreen to promote the "benefits" of environmental sustainability.

However, what is "Windy's" job? And why does the commercial end with, "blow, baby, blow?" (Is it supposed to be a reference to the GOP platform of "drill, baby, drill", along with the obvious double entendre?)

The other ads in the series are far less gendered, and it makes me wonder why there's a wind power ad, but not a solar power ad or a geothermal power ad. However, there are other ads on the pluginamerica.org site.

Review all of the blog posts below (they are short!) Select three to analyze.??Write an article that uses the examples in - Student pals — February 6, 2022

Review all of the blog posts below (they are short!) Select three to analyze.??Write an article that uses the examples in - Wridemy — February 6, 2022

Sociological Images blog by Abby Kinchy and adapted for our - Ace Your Research Paper — February 8, 2022

Sociological Images blog by?Abby Kinchy and adapted for our course. Gender and the Environment Gender is such a powerful way | Wridemy — February 8, 2022

Sociological Images blog by?Abby Kinchy and adapted for our course. Gender and the Environment Gender is such a powerful wa - Writerden — February 10, 2022