Jeremiah, Sarah S., Nikki R., and Erin H. sent us a great example of a company trying to make a feminized food safe for men. New Zealand’s Mammoth Supply Co. (a subsidiary of the multinational dairy giant Fonterra) is trying to convince men that yogurt is super manly and tough, “built to tame a man’s hunger.” The ads reinforce a whole range of rules about masculinity, which Erin nicely sums up as “the same old mythbashing that men need things that are big, tough, substantial, strong and rugged, and that coded-feminine activities (crying, being too involved in one’s personal appearance, coming into physical contact with people of the same sex) are inferior and weak”:

The website, which assures the reader that this is “real man food, man,” as well as each carton of yogurt includes additional helpful tips: 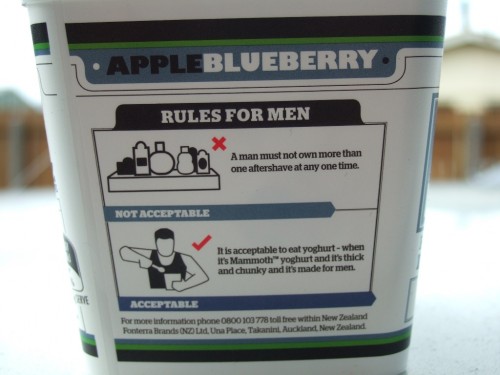 Lisa K. recently saw an ad for Billy Tea in a newspaper that implies men and women are no longer sufficiently masculine and feminine, unlike the good old days when the tea was first produced: 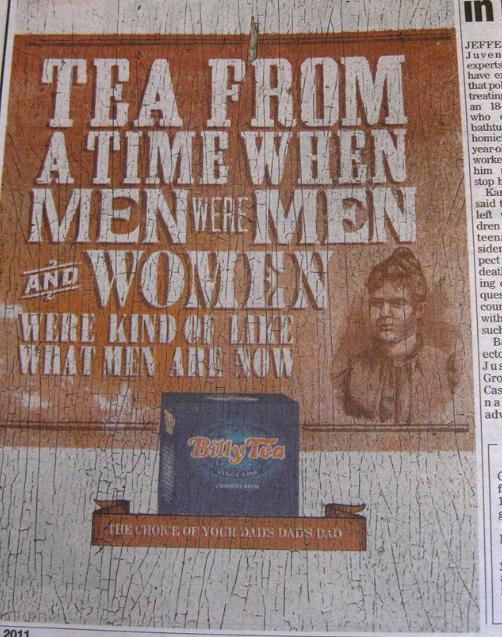 Here’s another one of their ads: 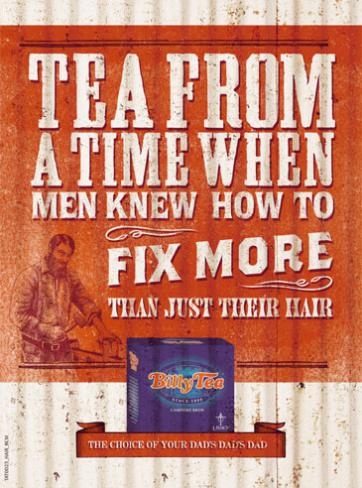 Sarah B. sent in this Miller High Life ad (which she blogged about at Adventures in Mediocrity) that makes it clear that the only types of salad men should eat are the type without, you know, girly vegetables:

In another example of gendering foods, Lisa R. pointed out Applebee’s commercials for its set of dishes with under 550 calories. Women love eating low-calorie meals:

The commercial aimed at men, titled “Manly Man,” presents ordering from the 550-calorie menu as something men might be a bit embarrassed about, but don’t worry — once the guys see your huge plate of food, your masculinity will once again be unquestioned:

Good lord I laughed at the "from a time when men were men and women" one. They got themselves a customer. Except not really because I don't have any money.

Woohoo, thanks for posting this! I am always surprised at people's reactions to these types of ads. It seems pretty well-accepted as fact that certain types of advertising can be deleterious to women's health (see: skinny models, youth-obssession::anorexia, botox, etc.), but very few people admit that gender binaries are harmful to men, too. A culture where it is considered bad to firstly, be "girly," and secondly, do things that are harmful (like eschew veggies) in the name of being manly, is flawed indeed.

- Sarah B. at Adventures in Mediocrity

These are like the best posters ever! Makes me want to go out and buy another pink suit so I can beat my chest and growl. GRRR GROOWL I'm a man!

It always struck me as odd that "eat more stuff (especially meat)" = "manly". Sure, I like to eat, but I like to eat things that taste good to me, and cheap cuts of meat and mass-produced aquaculture shrimp, both of which are slathered with so much sauce to try and hide the deficiency in quality, isn't up there on my list of things that I would consider spending my money on.

The whole "build/repair stuff" = "manly" trope also seemed strange to me. Sure, my dad could fix stuff (because he grew up the son of a mechanic), but my mom could also fix stuff (because she grew up on a working farm). I had no chance but to learn how to fix stuff - learning from both my mom and my dad. Too, the counter-point ("womanly" = "inability to build/repair stuff") is problematic, since such a woman would be less attractive to me (because I prefer to be with women who also know practical mechanical skills).

Also, the "lack of grooming" = "manly" message has been problematic. I'm no business suit person myself, but I'm not sorry that I take some time to make myself look good. Taking things to an extreme is problematic, but I think that the messaging on many of these ads tends toward the other extreme of wild hair and man-sweat as being the only way to prove one's masculinity. This would work if you lived by yourself, didn't work with others, and had no necessity of being in society in general. (Of course, being a hermit has historically also been seen as "manly".)

Finally, the yogurt market has, in the US anyway, taken on a very strong female image (likely too in NZ). In such a market, advertising as female or gender-neutral is likely to put you in direct competition with every other brand. However, marketing your product as specifically manly may well be a good business decision; you can carve out your own niche (provided that men -- and women, who still do most food purchasing -- continue to bite). I like yogurt, and usually buy it based on price and taste, not on the packaging or the man, woman, or message printed on the side.

I'm not from the US but I'm often talking on message boards with US people, mostly people in their late teenage years, early 20s. I am not sure if I am just noticing this now or if this is indeed a recent trend, but the "manly men" thing is everywhere.

Things like mustaches, lumberjacks, punches, beard, steaks, bacon, huge balls (yes, huge balls), etc, are often brought up when people refer to manly things. I can remember some of the first few times I started seeing stuff like this, specifically at Maddox's website (Maddox who later release dictionary of manliness), but I don't know if that was an old fad already.

Point of all this writing is: is all of this big focus on open, obvious and blatant manliness a recent thing in American culture or is it just how it has always been and I was just not noticing it?

Another one I recall was a beer (perhaps Miller, but I don't remember which) that came out with a new 64 calorie line.  Interestingly, it was aimed at both men AND women, but the commercials would be almost identical, aside from what the "stupid" bar patron would order.  Their clever, savvy friend would order a *whateverbeer* 64, and get a big frosty bottle of cheapass goodness, while their obviously moronic friend ordered 64 calories of something else.  The men's commercial showed the second man ordering 64 calories worth of the competitor's light beer, while the women's commercial showed her ordering 64 calories worth of a cosmo (or some other hilariously pink woman's drink).

As for the miller commercial above, what does that say about our society?  Women should only eat something if it's clearly labeled "diet" or has the calorie count emblazoned in pretty font across the front, but men should shove their gullets full of everything they can get their hands on, unless there is a passing chance that it might be healthy?  Eating a green salad with your steak won't revoke your man card, bucko.

Masculinity is frequently associated with freedom and power. If you feel compelled to obey codes governing social behavior you are neither free nor powerful.

The "man bag" one cracked me up. I carry a bag (a "man bag," if you will) to tote my tablet around. It's funny how many underhanded comments I get from people--even putatively "enlightened" people.

One of my favorite shows (which I haven't watched in a while) used to be Burn Notice, and the main character eats yogurt in almost every episode. He's a freakin' super-spy and he chows down on yogurt like it ain't no big deal. Because it ISN'T a big deal. It's food!!

I've never understood the point of gendering food. Everyone eats, so why turn away 50% of your consumer base?

That's really funny about yogurt. It's true, too. I found myself taking bigger, disdainful slurpy spoonfuls when a woman sat down near my table at a deli. I was in a hurry anyway, but I realized why I did that and laughed at myself for it.

I love the confusion that happens at restaurants when i order a salad and my wife gets a burger. The food runners almost always give the salad to my wife if they didn't take the order themselves.

As a denizen of the Antipodes I know the Mammoth Supply Co. ads all to well. I'd get around to thoroughly disliking the products too if they didn't do the best chocolate milk.

I think I shall point you in the direction of these irritating ads/PSAs which played until recently on New Zealand television. They are an attempt to reduce speeding, drunk-driving and accidents on New Zealand roads. Some are quite graphic and rather shocking and have sort of lost their effectiveness as the public is now rather inured to them.
This one tried a different tack as young men sadly make up the largest demographic of those killed on the roads here. Not sure that they have their intended purpose however as they get ripped up by a current affairs comedy show nearly every week.

That manly yoghurt looks delicious! I'm a woman and I'd really like chunky yoghurt with manuka honey... In Norway it's ok for men to eat yoghurt - the marketing isn't particularily gendered: http://youtu.be/4RvTGhi7cAk This one is for yoghurt with muesli. How feminine is that?

Here there is a larger women to men ratio, but I don't think it's particularily genedered either: http://youtu.be/bpvIeOfr7MQ

By the way - how are menus with less than 550 kcal something special? How many kcal do the other items have? I shudder to think about it.

That manly Mammoth yoghurt is friggin' delicious, because it has one thing that yoghurts marketed to women are leery of - a huge fat content due to the fact that the main ingredient is cream.

[...] surprisingly, I’m not the only person with this question in mind. Soc Images recently tackled this very idea in an article focusing on masculinity and food marketing. And, [...]

[...] extending into our media (inept fathers? Not in my kitchen!) and our economy (Dr. Pepper Ten, 500-calorie MANLY menus), and ending with you, the consumer. You cannot avoid it entirely, but you can be aware of [...]

Over the previous year, Wendys, as a rule, has appreciated comparable traffic to Panera. In any case, when you inspect each chain's pinnacle visit times, Panera takes a sizable morning lead, with 27.6 percent of the pastry shop brand's visits dividing 6 a.m. what's more, early afternoon. Just 10.7 percent of Wendy's traffic landed during morning hours. Take a part in talktowendys.com customer survey to win unimaginable rewards by Wendys management.