More on the Racialization of the Abortion Debate 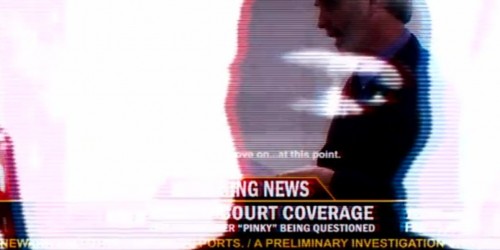 A few months ago Lisa wrote about bulletin boards posted in New York City that racialize the abortion debate by presenting it as a particular danger to African American children. The new anti-abortion film Gates of Hell takes this racialization a step further, presenting a future world in which the Black Power movement has begun a domestic terrorist movement against providers of abortion services for what they see as genocide against African Americans. Here’s the trailer, sent in by Dolores R.:

Black power. Abortion. Terrorism. “Prophetic fiction”. Three years in the making, “Gates of Hell” is a documentary from the year 2016 that chronicles the crimes of a band of domestic terrorists known as the Zulu 9. Finnish filmmaker Ani Juva travels to the United States to better understand the mysterious black power assassins, the bizarre eugenics conspiracy theory that drove them to commit extreme acts of violence and how America’s political landscape was transformed forever. Blending real history and real public figures with a fictitious (yet plausible) future, it is safe to say that you have never seen a film like “Gates of Hell”.

As yet, the film doesn’t have a distributor; they have an online call for funding to help screen the film. The production company behind it, Illuminati Pictures, is headed by Molotov Mitchell, a contributor to popular conservative website World Net Daily, which posted a promotional video about the movie.

In her earlier post, Lisa questions the apparent concern for African Americans expressed in this framing of the abortion debate, pointing out that in some cases they seem to blame Black women for having abortions and totally ignore the structural factors at play. In a similar vein, this anti-abortion film, while ostensibly sympathetic to the idea of African Americans fighting what they see as genocide, draws on the stereotype of African American men as particularly violent and willing to kill, even while presenting them as possibly justified in this case.

And over at Feministing, Vanessa pointed out that we might question Molotov Mitchell’s genuine concern for oppressed groups given a video he appeared in back in 2009 supported Uganda’s anti-gay bill, which allowed the death penalty for repeat offenders:

As Lisa pointed out, there are very good reasons to be concerned about African American women’s reproductive freedom and the structural inequalities that might push them into making decisions about whether or not to end a pregnancy regardless of their personal preferences. But some of these anti-abortion messages presenting abortion as genocide seem to use racialization as a convenient tool that has little to do with more widespread concern about racial (or other forms of) inequality, discrimination, and even violence more broadly.

I find this film particularly egregious in light of the efforts the anti-choice movement made to distance itself from Scott Roeder, the murderer of Dr. Tiller. The idea that *white* people are making a coordinated effort to kill abortion providers is apparently reprehensible to these individuals (even though it's closer to reality), yet portraying a black conspiracy to violence is A-OK.

wow, could we put a trigger warning on this one?

Let's see if I can get my head to together.. For the first clip, the whole context strikes me as wrong. Just the idea of a journalist form across the pond being able to make a fundamental contribution to a racial debate that doesn't exist in Europe is off. But the image of "freedom fighters" like that also strike me as a sort of relic from an era when race and class equality really only was about the men, and could come at the expense of women's fundamental rights of it was comfortable as a solution. I really want to believe that this wouldn't be able to happen in a democratic society today

The second one is just horrifying. He's actually supporting a law that would end up wiping out 10% of the country's population - not a cohesive ethnic group, but the sheer amount of victims and the reson for killing them off should really make this into a genocide. As someone who'd end up dead with a law like this in her country, it's just nauseating to see someone posting that video

Not really much substance in this article. There is no support for the opposing view or a real argument against Molotov or his film. AND, the second vid doesn't condone hunting down homosexuals as has been commented.

Luckily for gays in Uganda, African countries don't function at a very high level so the police will probably be too incompetent, corrupt and disorganized to actually enforce the anti-gay law, or any other laws for that matter. Instead gays will be victims of occasional good-old-fashioned lynchings, which will occur with or without a law giving the death sentence for gay sex. If your country doesn't have much rule of law, statutes are just scribblings on meaningless pieces of paper, all that matters is who's got the most guys with machetes.